.
TDC - The Technical Direction Company is proud to be deploying the full range of its professional and technical expertise in providing core technology and services to Destination NSW for the sixth annual Vivid Sydney festival. Anthony Bastic, Vivid Light Festival Directorsaid: “Vivid Sydney is a unique celebration of light, music and ideas that will see the centre of New South Wales’ vibrant capital transformed by a series of state-of-the-art visual and creative art installations. There are two components to Vivid Light. The first is the Light Walk, which is the publicinterface of Vivid Sydney. This includes numerous light installations by artists. Secondly, also forming part of the Light Walk, are projections onto some of Sydney’s most iconic buildings including the Museum of Contemporary Art and Customs House. We are thrilled to work with TDC in bringing the artists’ vision to light.”

Running from 23 May to 9 June, Vivid Sydney is a unique celebration of light, music and ideas that will see the centre of New South Wales’ vibrant capital transformed by a series of state-of-the-art visual and creative art installations.

“This is our third year of working with Destination NSW on Vivid Sydney, providing a huge range of technologies including 3D media servers, 3D mapping, video projection equipment, projection tower infrastructure and sound installations, not to mention our highly skilled crews to manage the technology,” comments Kain Jones, Special Projects Manager at TDC. “We have used our experience of working on Vivid Sydney for the last three years to apply the insights with have learned to how to adapt and continue to make sure that the elements TDC is involved in are amazing. 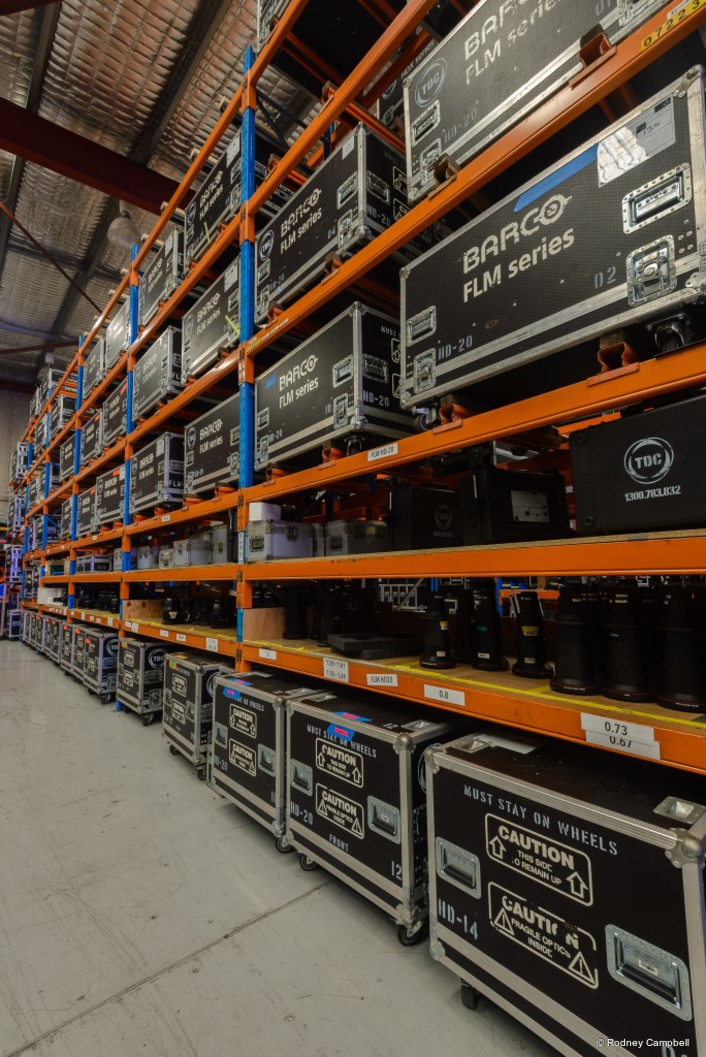 “As Vivid Sydney grows, new buildings and locations are added, so initially we spend considerable time analysing which technology is best-aligned to meet the artists’ vision. We get involved from the outset in installation design, mapping the buildings to enable the designers to create content specific to the outline of those buildings. We then work on optimal locations for projector placement, media server selection, lens selection and the number of projectors required to meet specific brightness (lux) output for each installation.” 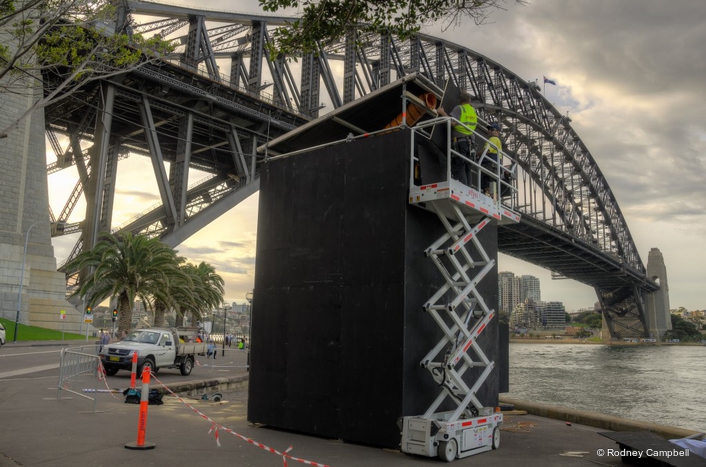 “Vivid Sydney is a great challenge for our company, the scale of this event is enormous in regard to projection technology required to bring it all together,” comments Michael Hassett, TDC’s Managing Director. “This year over 50 Barco projectors will be deployed in total, ranging from the brightest projector in the world, the HDQ-2K40 (40,000 lumens brightness) along with Barco HDF-W26 (22,000 lumens brightness) and FLM-R22+ (22,000 lumens brightness) projectors.  This is a projection technology feat and not something that any company globally could pull together easily. We’re proud to be working with the great team at that Destination NSW again this year, and we look forward to the continued success of Vivid Sydney.” 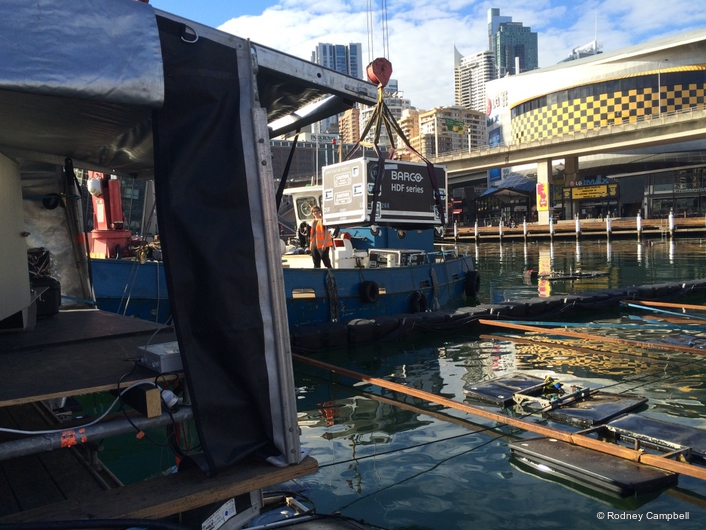 And the last word goes to Olin Winton, Technical Manager at TDC who says: “It’s always a joy to work on large format projection projects and Vivid Sydney is no exception. The opportunity to display images on iconic buildings takes months of planning and long nights of alignment. This year we have added several new projects to our list, which we are extremely pleased with. Seeing it all come together, working with world class technicians and seeing the end result of people interacting with the buildings is extremely rewarding.” 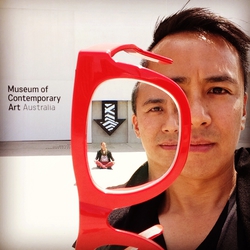 Dichroic Dimensions
Kain Jones points to one aspect of a unique interactive installation at the new building of the Museum of Contemporary Art Australia (MCA), where artist-in-residence Ross Manning has collaborated with multidisciplinary artistic collective, The Digital Shamans to give visitors the chance to projection-map the façade of the building using only their voice.

“There’ll be two microphones on a slightly raised platform. As the audience uses their voice to interact with the installation, various hidden layers of visuals and soundscapes will be revealed based on pitch,” explains Michael K Chin at The Digital Shamans. “TDC are an amazing company with the technical know how and equipment to cope with the subtleties in our work. Especially with the HD video taken of dichroic filters producing subtle gradients in tones and colour shifts, strong contrast and vivid colour. It’s been a pleasure working with TDC for the first time. They are very professional and their experience with past Vivid Sydney festivals has been invaluable.” 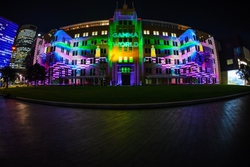 Gamma World
Bringing together the worlds of live performance, interaction and visual art onto the original façade of the Museum of Contemporary Art, ‘Gamma World’ combines isometric designs, old school gaming, pop up 3D books and forced perspective using 3D and animation tricks that powerfully takes the viewers on a journey through changing worlds.

Stella Carmody, Producer at Spinifex Group Sydney says: “What makes this projection so special this year is that we were able to combine our love of story-telling with the wonderfully inspiring artwork of Jess Johnson to create an abstract, engaging and playful piece of moving art on this iconic building. Hardware and projection mapping was undertaken by our good friends, large-scale projection experts, TDC.” 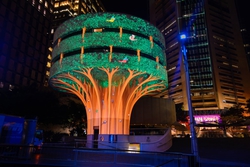 Urban Tree Project
If you ever find yourself wondering what grew in the CBD before monuments of glass and steel, Urban Tree Project in Vivid Sydney 2014 will show you. The CTA building in Martin Place will grow out of the ground to become a magnificent living tree within the surrounding urban environment to celebrate and reflect on Sydney’s original green landscape. Design and animation company, Ample Projects turned to TDC to provide the projection solution.

“This project had unique technical challenges, so the natural choice for us was TDC. Ample designed a complex 3D mapping solution in collaboration with the TDC team. They were highly professional, providing projection design solutions for a cylindrical architecture screen with extreme focal planes. We look forward to working with them again soon," says Ample Creative Director, Nicholas Tory.

“The shape of the structure was great to work on. We decided that the best solution was to map the projection to the curves of the building using Coolux Pandoras Box Media Servers,” comments Pete Lynn, TDC’s Media Server Specialist. “We’re very happy with the results.” 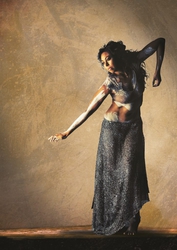 Bangarra’s Executive Director, Philipe Magid, said: “TDC is providing equipment and video expertise enabling our company to project a stunning work of art on to a section of the iconic Sydney Harbour Bridge. Through a fusion of dance movements and music soundscape and thanks to video projections supported by TDC, the important story of Patyegarang will awake and inspire with the sensations and emotions of ‘first contact’”. 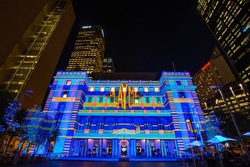 Play Me
In a poetic explosion of colour, light and sound, ‘Play Me’ will transform the façade of Customs House into a series of massive ‘musical sculptures’ that are individually selected and manipulated by the audience.

“Each of these ‘sculptures’ depicts a family of musical instruments which the audience can ‘play’ in real-time using a touch screen located on a platform in front of Customs House bringing it to life in glorious torrents of ever-changing colour, light form and sound,” says Sergio Carrubba, director and projection designer at Danny Rose, the design team for this project. “We’ve worked with TDC before on the ‘Move Your Building’ exhibit at Vivid Sydney 2013. In all cases, TDC offers exceptional support during planning phases, onsite technical support and the very best in projection equipment to assist with our designs which will all be brought to life at Vivid Sydney.”

Ignatius Jones, Creative Director, Vivid Sydney, comments: “Vivid Sydney is a strange beast: on the one hand it is a major government initiative designed to drive visitation and tourist expenditure during the year’s lowest season, and on the other a celebration of the fusion of Art and Technology that is changing our world forever and for the better. As Creative Director I must split my focus between the exacting contractual and economic demands of government, and the necessity to provide cutting-edge technical solutions to all the issues of larges-scale – or should I say vast-scale – public entertainment. TDC has an instinctive and comprehensiveunderstanding of these issues. They are the perfect collaborators: calm, creative and totally competent. I would have no qualms in recommending them to anyone in the tough world of live mass entertainment, and hope to be working with them for a long time to come.”