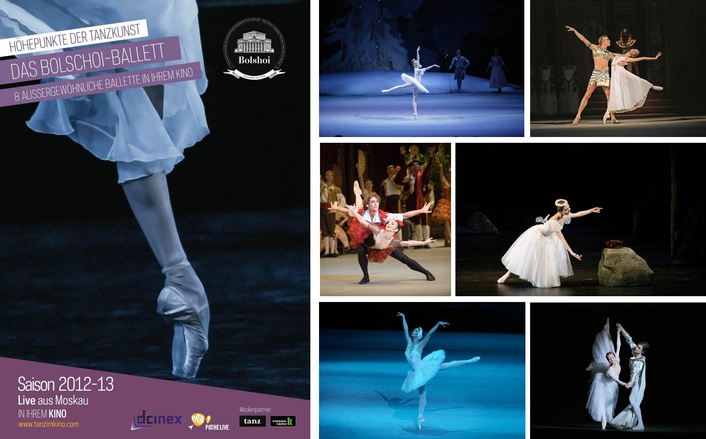 Swan Lake, Nutcracker and more Live in Cinemas in Austria and Germany
Swan Lake is regarded as one of the world's most popular ballets of all time, coming close after The Nutcracker. Russian composer Tchaikovsky’s familiar music is one reason for the ballet’s enduring popularity. The ballet premiered in 1877 at the Bolshoi Theatre in Moscow as The Lake of the Swans. Although the first version flopped (Reisenger), the second production choreographed by Marius Petipa and Lev Ivanov in 1894 brought the ballet the success it holds today. Most of today's versions are based on the St Petersburg 1894 production.

Swan Lake is considered to be one of the most technically and emotionally challenging classical ballet. Internationally reknown Principals Maria Alexandrova, Ruslan Skvortsov and Nikolay Tsiskaridze dance the leading characters of Odile/Odette, Prince Siegfried and sorcerer Rothbart.

Commissioned in 1875, Pyotr Ilych Tchaikovsky composed the music for Swan Lake in only one year. The ballet premiered in 1877 at the Bolshoi Theatre in Moscow as The Lake of the Swans. Although it has been presented in many different versions across the years, most ballet companies base their stagings both choreographically and musically on Marius Petipa’s work.

At the palace, the heir to the kingdom, Prince Siegfried, is celebrating his birthday. He is congratulated by his mother, the Princess Mother, his friends and courtiers. In a majestic ceremony, Siegfried is made a knight. Young girls try to attract his attention as the prince must choose a wife during his birthday ball. By night fall, overcome by emotions of a different order and dreaming of pure and ideal love, Siegfried escapes into the night and finds a flock of swans which he decides to pursue…

Please find a cinema in Austria or Germany here

Yuri GRIGOROVICH
After being accepted into the Leningrad Ballet School in 1946, Yuri Grigorovich went on to become a soloist at the Kirov Ballet of St. Petersburg where he stayed until 1962. He joined the Bolshoi Theatre in 1964 and was Artistic Director until 1995. His most famous works are Nutcracker, Spartacus and Ivan the Terrible.