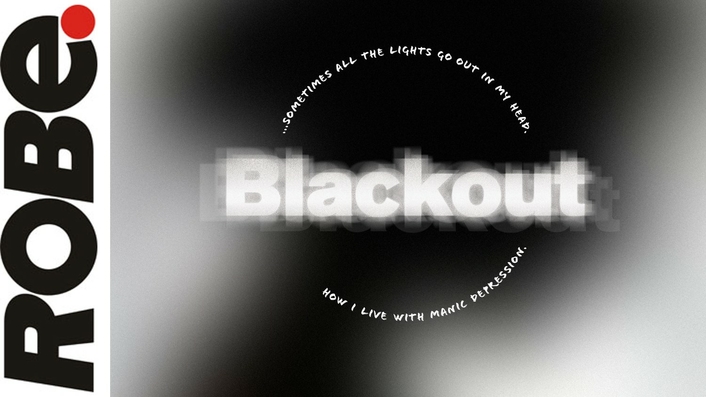 Robe is very proud to be the main sponsor of “Blackout” - a direct, uncompromising and fully visceral immersive visual and sonic installation created by Guildford School of Acting (GSA) lighting tutor Mig Burgess … to raise awareness of mental illness.Blackout will be staged in the Bellairs Theatre at the University of Surrey, UK, and refers specifically to bipolar II disorder. The work is designed to offer a snapshot of what it’s like to experience the highs and crushing lows of bipolar II, what Mig describes as being “like the lights going out in your head”.

Open and honest discussion about manic depression and other mental health issues is currently franker and more public than ever before, especially with the recent loss of several high profile, hugely talented music artists at the peak of their careers like Tim Bergling (AKA Avicii), Prodigy fighter Keith Flint, rapper Mac Miller, Linkin Park’s Chester Bennington, Soundgarden’s Chris Cornell and others.

With the essential seed money being provided by Robe for this provocative project, Mig has been able to assemble a highly skilled and imaginative creative team, all experts in their own fields, to help her realise the installation.

The director is Simon Anderson known for his work with the Contexture Theatre Company; sound designer Zoe Milton is a specialist in binaural sound; Tony & Olivier Award winning video designer Finn Ross is  the video designer, and the lighting designer is Paul Burgess, technical manager of the Peacock Theatre in London.

They are joined by Dr Paul Hanna, senior lecturer and research director in clinical psychology at Surrey University, who will be monitoring the audience’s perceptions and perspectives on bipolar II before and after experiencing the art work, as well as exploring the potential therapeutic benefits of light art like this to those living with bipolar II.

As a practitioner in the world of entertainment visual and technical arts, Mig who has suffered with bipolar II since the age of 17, was keen to use the technologies and tools with which she is familiar.

In this fusion of lighting, sound and video, her goal is that the audience members – who each experience “Blackout” individually for five minutes – can focus on the mental path inside the head of a bipolar II person, and feel the isolation, fear, emptiness and host of other emotional responses as they transition from functioning ‘normally’ into the depressive lows … and the battle to regain balance, structure and some sort of control.

Each person enters a closed square box built from a ground support system standing on steeldeck flooring with three sides of stretched 19:9 aspect ratio video screens in front of them. These are fed by rear projecting machines placed outside the box and the visuals represent the ‘real’ world.

Inside the larger box is a smaller scaffolding structure – this represents Mig’s brain – and this is rigged on all four sides with lighting fixtures. Mig’s initial inspiration for this was Kanye West’s striking 792 x PAR can rig on Glastonbury’s Pyramid Stage in 2015, however, she realised that LED fixtures would be the practical way to go.

Sixty-four Light Initiative ‘Noodle’ fixtures, a custom strip of LEDs – are arranged in a linear and logical fashion and they represent the brain. They are timecode triggered and a priority in the audience experience as the bipolar cycle unfolds.

Behind these, the outside of the box of lights and the four video screens are visible, posing as life outside of Mig’s head!

A primary research question will be whether a bespoke art installation can change attitudes, beliefs and understandings of what it’s like for individuals diagnosed with bipolar II.

In addition to her creative team and the financial support and fixture provision from Robe, Mig has been assisted by several key industry companies who have generously donated kit, including Blue-I for the projectors and disguise media server; ETC with lighting programming and support for the period, Hawthorn who supplied the projection screens, Neg Earth who offered rehearsal space and WYG visualisation facilities, and White Light who are providing audio equipment, trussing, rigging, cables and additional lighting. Robe’s new T1 Profile luminaires are used for key lighting inside the lighting box.

Mig has really enjoyed seeing everyone collaborate and energise behind the project.

Robe’s NRG (Next Robe Generation) programme has also been involved in that all Mig’s students who are also working on Blackout are members.

In particular, she is assisted by recent GSA graduate and NRG crew member Michael Fox who is the production LX, lighting programmer and also heading up the production logistics, and third year Oli Hancock who is looking after the video elements.

Robe UK’s MD Mick Hannaford comments: “This important piece of work further reinforces the strong connection between Robe lighting and the Guildford School of Acting through the NRG. We hope it highlights the importance, need for and access to mental health welfare throughout our industry, for both the current and the next generations of creatives, technicians and artists”.

For Mig, it’s a highly personal journey being conducted in a public space which she hopes will “show the world what it’s like to have manic depression”.

Now comfortable with who she is, accepting of her condition and what that means for day-to-day life has been both challenging and empowering.

“I’ve worked hard to understand, reflect and self-analyse. So now is the time for me to lead by example; be open, share, and generate discussion, debate and talk that will lead to greater understanding of mental health” she concludes.

Blackout is launched on May 1st and followed by three public days 2nd to 4th May. Anyone interested in experiencing and participating in the installation can book a slot here: http://gsauk.org/events/blackout

Bipolar disorder, also known as manic-depressive illness, is a brain disorder that causes unusual shifts in mood, energy, activity levels, and the ability to carry out day-to-day tasks.

There are four basic types of bipolar disorder; and the moods range from periods of extremely “up,” elated, and energized behaviour (known as ‘manic episodes’) to very sad, “down” or hopeless periods (known as ‘depressive episodes’).