Successful Start of RUHR.2010 with Riedel Intercom and Radio 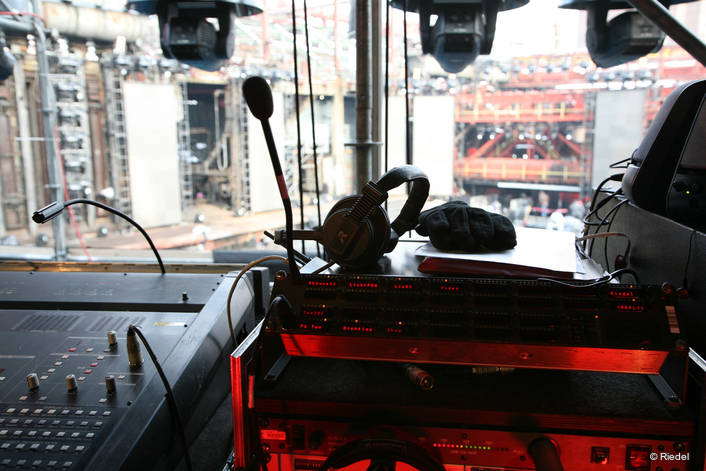 Artist Control Panel
The organizer of the opening ceremony of RUHR.2010 – the European Capital of Culture – utilized a flexible communications infrastructure to integrate the various parts of the event. Riedel Communications, one of the leading manufacturers of intercom, audio network and fiber technology, delivered a comprehensive system for the occasion. Equipment included a combination of Artist digital matrix intercom and Performer digital partyline, as well as analog and digital trunked radios plus a RockNet digital audio network. Riedel also handled the radio frequency management for the event.

Despite snow, ice and freezing temperatures, Riedel's communications infrastructure guaranteed a smooth opening ceremony for RUHR.2010, held at the site of the old Zeche Zollverein coal mine in Essen. Two separate events needed to be integrated into one single infrastructure: the official opening and the "Glück Auf 2010" festival. In addition, a translation system and a decentralized press splitter had to be included in the infrastructure. On its first weekend RUHR.2010 had more than 100,000 visitors and nearly two million people watched the live TV broadcast of the event.

"The demands of the opening ceremony were immense. Several departments at separate locations needed to be integrated over a large area. The weather conditions with snow, ice and wind were far from ideal and demanded a lot from the technology and everyone involved. Riedel's know-how and equipment made this unforgettable event possible," said Ralph Kindel, event manager of RUHR.2010. 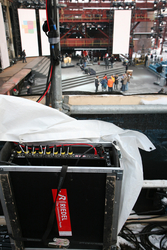 At the heart of the intercom installation was an Artist 64 digital matrix. The system served as the foundation for integrating different areas such as the announcers, pyrotechnics, video, audio, lighting and translation services. A total of 13 Artist 1000 series control panels were used at Zeche Zollverein.

A Performer partyline system that was connected via a Performer C44 system interface complemented the matrix intercom installation. The partyline equipment was used to coordinate the lighting between FOH and the follow spots. 12 beltpacks were also used at the opening ceremony.

To include some departments in the communications infrastructure, such as security and mobile technicians, Riedel used an extensive combination of analog and digital trunked radios. A total of 100 analog Motorola GP680 and 210 Motorola MTH800 digital radio transceivers were used. Digital trunked radios combine the advantages of trunked radios with digital mobile telephones. They offer maximum speech quality and flexible network and connection management. In addition, digital radios provide protection against eavesdropping – a great advantage at events with VIP guests like the German President Horst Köhler and the President of the European Commission José Manuel Barroso. Riedel handled the installation of the radio network. Four Riedel RiFaces integrated the analog radios into the communications infrastructure. RiFace is a universal radio interface used to integrate radios into a wired communications system. 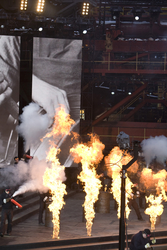 To coordinate the extras in the opening ceremony, Riedel deployed 150 FMR 1000 radio receivers. These ultra-light receivers only allow users to listen to a radio transmission. This is especially useful for events where large numbers of people do not need to actively participate in communications.

A decentralized press splitter consisting of six RockNet RN.302.LO line out and one RN.301.MI microphone in modules allowed direct access to the audio stream of the event. Broadcasters could simply connect to one of the RockNet interfaces that were placed all around the stage. Riedel RockNet is a digital audio network that is specially tailored for live-sound and event applications. Its redundant network topology secures the network against single points-of-failure. RockNet provides broadcast quality digital audio. The flexible routing capabilities make RockNet perfect for these kinds of applications.

UHF radio receivers served as a translation system for the international guests.