The Stars of Armenia 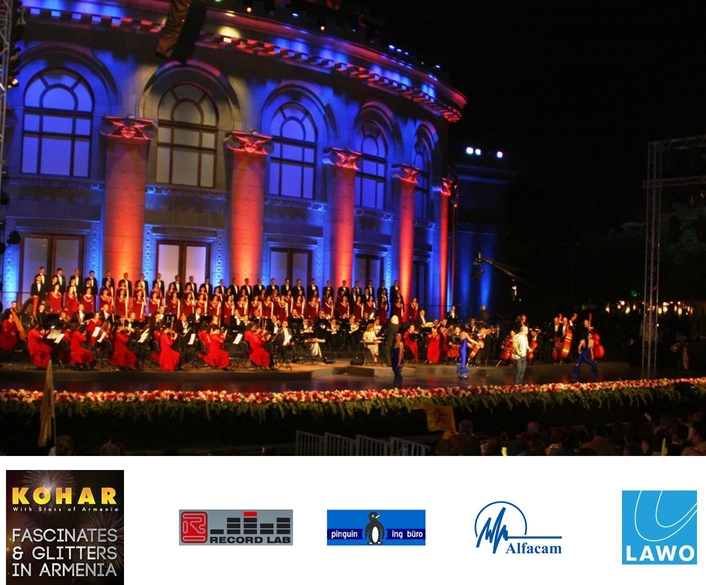 Record Lab uses Lawo technology at complex orchestral production
The audience holds their breath, as the opera house seems to collapse. Fortunately, this is only the effect of a surprisingly realistic 3D projection: the opera house in Yerewan’s Liberty Square — the venue for a ‘KOHAR with Stars of Armenia’ mega event – is still intact!

For the first time in its history, KOHAR, the renowned Armenian symphony orchestra, is accompanying twelve Armenia pop stars. With Cologne’s Record Lab responsible for the technology and logistics required for this amazingly extensive open-air production, a Lawo mc²66 was employed as the central mixing console for the audio component of this production.

Record Lab previously recorded the KOHAR symphony orchestra in 2005 in Istanbul, and in Syria in 2009. Then as now, this full service provider from Cologne relied on Lawo products. Record Lab’s own OB van, already in use for events at the same time, could not be used for this project. It was therefore decided that the concert would be handled by an additional OB van equipped with the same Lawo console. This was Alfacam’s OB 31 HD unit, featuring 18 HD cameras, two wireless links, a spidercam, and a cruisecam, as well as a Lawo mc²66 with 56 faders (24+8+24) and 144 DSP channels. The stageboxes were initially designed for 96 inputs but had to be upgraded due to the remarkable size of the orchestra, which amounted to 164 musicians plus twelve singers. To solve this problem, additional stageboxes were provided, bringing the number of inputs to 165. 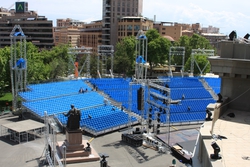 This also required the installation of extra MADI cards in the console’s core. “The requirements for this production were even greater than in Syria because we had ambience microphones in addition to the mics for the twelve pop stars. With all effects taken into account, we needed a total of about 200 channels” relates Markus Maschke, CEO of Record Lab, and continues: “Luckily, the flexible extendibility of Lawo’s routers took care of even this challenge. It’s a great system!”

In order to achieve the best possible mix for TV and the Internet, as well as guaranteeing superb sound for the DVD that Record Lab was also producing, a Tonmeister evaluated the orchestral score during rehearsals and the concert. “One advantage of Lawo consoles is the extremely quick access to all tracks, and the ability to trace the source of each audio track. For instance, at the concert in Yerewan, we suddenly had a harmonica on a different channel. Thanks to Lawo’s mc²66, I was able to track down the source of the signal and route it onto a different channel strip within seconds,” details Markus Maschke when discussing another advantage of Lawo consoles.

Record Lab handled technical management of the entire production in cooperation with Ralph Kessler (Pinguin Ing.Büro). A total of 165 audio tracks were recorded on multitrack. The mix via the mc²66 had to be ‘ready-to-air’ because the event was being broadcast live on TV. In addition, there was a satellite uplink in Yerewan and a downlink located in Cologne, from where signals were put on the Internet and made available for streaming from North America, Europe, and Asia.

The entire production required a crew of 70, including control room personnel, camera operators, technicians, as well as cable runners. The vehicles, including the OB 31 HD van and an equipment vehicle, drove to Trieste (Italy) and then continued on to Istanbul via ferry. Finally, for the last leg of the journey, they travelled on to Yerewan by way of Georgia. EFM Event Logistics delivered, by air, a spidercam, a cruisecam, and the other equipment required for the wireless camera links. The shipped equipment cargo weighed around four tons, so camera cranes were rented in Armenia. 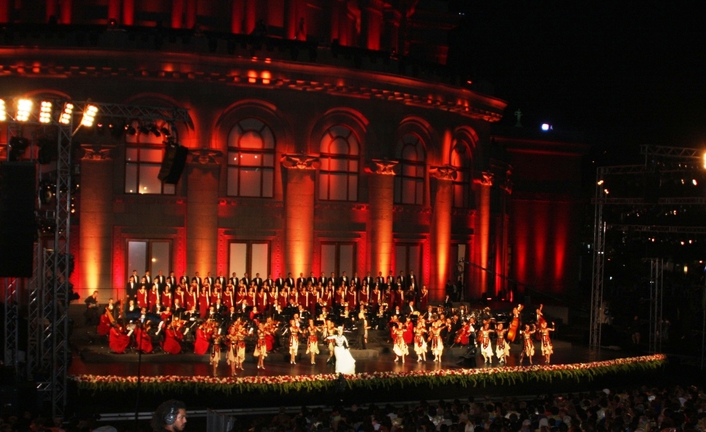 Cologne-based Record Lab is a full-service provider, offering facilities in the following areas: broadcast services (entertainment, music, sport), music production, audio post, audio technology consultation and technical support for large-scale events. The company’s experienced employees focus on quality and the use of synergy effects resulting from mobile and fixed recording studios for complete support of even the most complex productions.