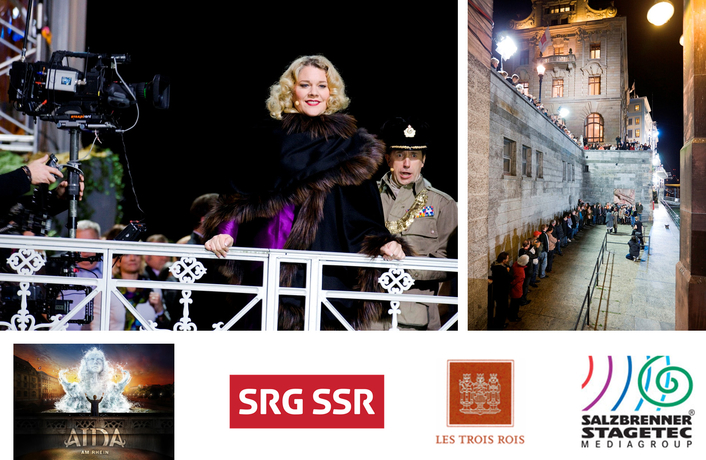 Swiss TV produces Aida am Rhein at various locations in Basel using STAGETEC audio systems
On the 1st of October 2010, Swiss TV produced the opera Aida am Rhein (Aida on the Rhine) live on air. This was the third live production of a famous opera where the individual scenes only come together to form a whole on the viewers’ screens at home. A large digital audio network comprising numerous STAGETEC components and integrating three digital mixing consoles ensured exceptional sound quality for Verdi’s opera.

The numerous scenes in Basel – including various suites, terraces and rooms at the Grand Hotel Les Trois Rois, the banks of the Rhine around the Mittlere Brücke (Middle Bridge) and even on ships decks and pontoons on the Rhine – made this staging a remarkable logistic and technical feat. According to Rolf Allenbach, project manager and representative of tpc, who acted as executive technical service provider, the project made the highest demands on the audio systems in particular: While the orchestra performed in a fixed location (the hotel’s ballroom), the other participants – soloists, the main choir, and the additional choir – were spread all over the area and were sometimes several hundred metres apart.

tpc is one of the major users of STAGETEC digital systems. The TV-production service provider owns a large pool of STAGETEC consoles and audio routers. The Aida production required a big OB truck featuring an AURUS console and an extensive NEXUS audio network to integrate all the sites in a star topology. The final mix for the live broadcast was created in the vehicle. 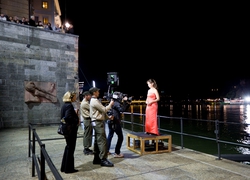 For the soloists’ premix STAGETEC provided another AURUS together with Christian Fuchs, their operator. Christian is a highly experienced MEDIAGROUP expert in the handling of live events for the music and theatre industries. On the 1st of October however, he was in charge of creating the premix in a makeshift studio at the Grand Hotel. tpc also relied on external equipment for the orchestra premix and for this purpose, they rented the Ü1 radio truck from Hessischer Rundfunk, a German state-owned broadcaster. This vehicle is also based on STAGETEC technology. The truck’s 10 year old CANTUS mixing console was integrated into the audio network for the production. Willi Zürrer, audio director for the Aida production, did the orchestra mix: “I already know this truck from the earlier live opera productions in Zurich and Bern. With the STAGETEC-based audio-control workspace and its acoustic features, it is perfectly suitable for the application in hand.”

Many of the cross linkages in the audio setup are created by MADI lines. This helps to avoid one mixing console’s activities affecting any of the others. In particular this means that each engineer can adjust the microphone gain of each microphone individually and independently of the other consoles being fed from the same source. Another feature of the NEXUS MADI boards helps to further simplify the networking by offering individual sample rate conversion for each MADI channel. Thus there is no necessity for a common house clock for all the OB trucks. 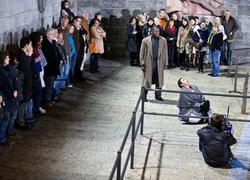 Another MEDIAGROUP product – a new DELEC commentary system – was used for translating the presentation.

Since the production took place in publicly accessible areas of Basel, safe cabling was a critical aspect. The thin and flexible optical cables used for networking the NEXUS are advantageous in this context since they are easy to hide, secure and fasten. Otherwise, the production was characterised by the vast number of wireless systems. Selecting appropriate radio frequencies and aerial positions was a task for real experts.

Live events such as Aida am Rhein cannot be rehearsed repeatedly like in-house productions; therefore speed was the name of the game. However, the experienced engineers met all the requirements of this complex task thanks to the well-prepared CANTUS and AURUS project configurations and the snapshot automation these consoles offer.

While the live transmission was in stereo, Swiss TV will produce a DVD featuring a 5.1 sound track. This DVD will be available through Swiss TV and will give those missed the live broadcast the opportunity to enjoy this remarkable production.