On Stage - The Christie Roadster HD10K-M

Marc Hollogne is an artist with many strings to his bow. Passionately fond of both live theatre and film, he has managed over thirty years to develop the innovative concept of “cinema-theatre”, a hybrid art form combining stage performance and projection, where theatre and cinema interact and blend in one space. The players on stage join in the projected action, talking with their film counterparts and moving into and out of the screen to interact with them. Now Marc Hollogne is using a Christie Roadster HD10K-M video projector to give Mathilda May her cues as she plays the Comtesse de Leauvive.

The story of L’illuminé is set in April 1788, just a few months before the French revolution; but it’s another revolution – the industrial revolution, still in its infancy but not to be denied – that has locked the chevalier de Casignac up in the dungeon of the Comtesse de Leauvive. Rousseau is dead, and a revolutionary invention, the “steam engine”, is driving human life at a pace far beyond its natural breathing rhythm. The chevalier’s instinct urges that these contraptions, whose mechanisms burst the constraints of human effort, must never be allowed to proliferate. Guided by his intuitions he harangues his peers with feverish tirades which they find eccentric and hard to understand; but they are visionary none the less, for to us they merely describe our everyday technology.

“It’s been love between Ydeo and me ever since L’illuminé was first staged in Avignon”, confesses the work’s author, actor, director and producer Marc Hollogne. “Ydeo is constantly on the lookout for innovative technical solutions; it’s been helping me out and giving me tips ever since then: it introduced me to Christie’s video projectors, which I’m using again this year as this adventure of staging L’illuminé continues.”

Indeed, Marc Hollogne has always had a lively interest in new technology and all the inventions which have been made since he first set about the art of combining live theatre with film – though he declares all the while that he doesn’t understand any of it, and adds mischievously that his shows are created with “anti-technology”. It’s the sort of “artist’s paradox” he thoroughly believes in.

“When I created my first shows it was still the age of film. Times have changed, and now digital media have given us much more flexibility, technical and financial. Today that flexibility is everywhere: in getting the images, in storing content for display, and even in the projection itself, the real keystone of my shows. Nowadays I no longer fear the impossible, because I know that so far as projection is concerned everything is possible, so I can go full steam ahead on all my upcoming projects.”

“Getting together with Marc Hollogne was something that happened on the spur of the moment: he was presenting his show to producers before the 2010 Avignon Festival,” recalls Freddy Claverie, President and General Manager of Ydeo. “Marc had been used to working with another firm, but he asked us for some advice. Once he’d explained what he needed, we realised the Christie Roadster HD10K-M was the right choice: firstly because of its performance and Christie’s Twist keystone correction technology, and secondly because it has two lamps, which means less chance of a breakdown during the live performance. That’s how we started working together, and it’s been nearly two years now.” 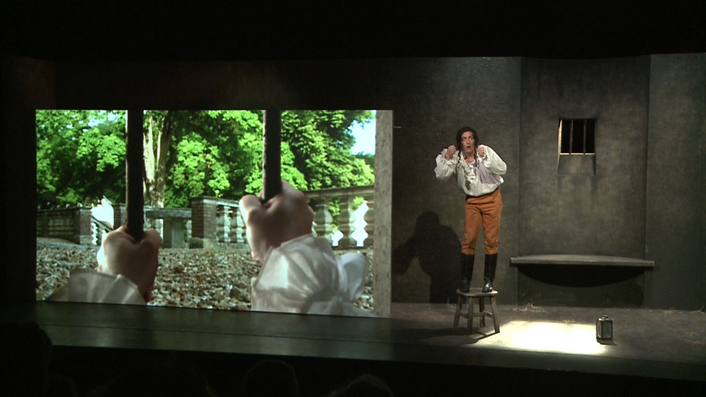 Getting the stage players’ movements perfectly synchronized with the “canned” film actors is quite a challenge on every occasion; but everything on the technical side has been designed with two watchwords: simplicity and dependability.

“Looking at it from the outside, you’d imagine the show was full of really complicated contrivances. Not a bit of it,” stresses Freddy Claverie. The film produced and directed by Marc Hollogne, which portrays the characters played by Mathilda May, Rufus and Michel Jonasz and others, is stored on the famously straightforward and dependable Aja KiPro. As for the light console, it is calibrated to the KiPro’s time-code output, so it switches the various clips shown as the narrative requires. And all supervised by just one technician.

On scene, the projection screen is 9m wide by 2.3m high. As the staging requires, it slides from the left-hand side of the stage – total proscenium opening 16m – to the right-hand side. 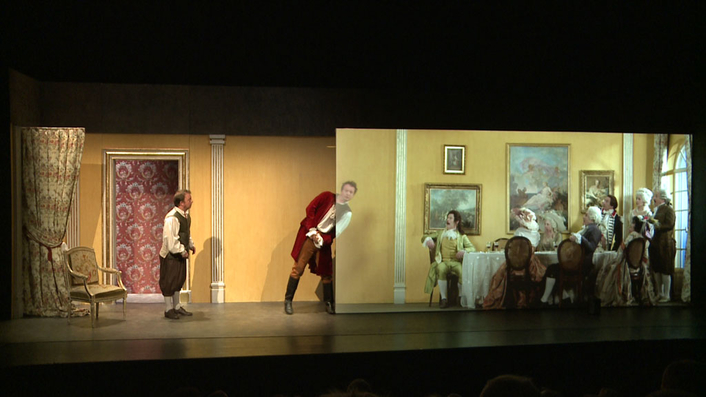 “In order to get away with just one Christie Roadster HD10K-M and not have to reposition the projector when the screen slides over to the other side of the stage, Marc Hollogne uses a display trick that makes use of the Roadster’s HD (1920 x 1080) resolution and the distance between the screen and the front row of the audience,” Freddy Claverie reveals. 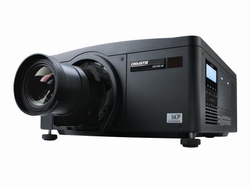 The trick involves projecting an image 16m wide – the full width of the visible stage – by 9m high in 1920 x 1080 pixels, with a useful image that covers only the area of the screen (9m x 2.3m). Once the projector is registered and the scale of the useful image adjusted to within a single pixel (thanks to the Christie Roadster HD10K-M’s Twist function), it is the screen which moves from right to left in order to accommodate the content from the KIPro. The useful image is deployed within a black image on the source stored on the KiPro. “When the full resolution of the Roadster’s HD matrix isn’t used, the distance from the first row of the audience acts as virtual compensation for that deliberately lower resolution. The result is astounding, and it’s thanks to Marc Hollogne’s concept of film+live theatre, the actors’ skilfulness and the Roadster’s Swiss-watch precision,” concludes Freddy Claverie.

L’illuminé won rave reviews at the 2010 Avignon Festival for its material, its staging and its originality. During 2011 it has been playing at the Dejazet Theatre in Paris.

Fantasia’s Magic Enchants Switzerland
Christie Solaria Series Stars at Cannes
Christie Projectors are a... Hit at the Eid in Riyadh