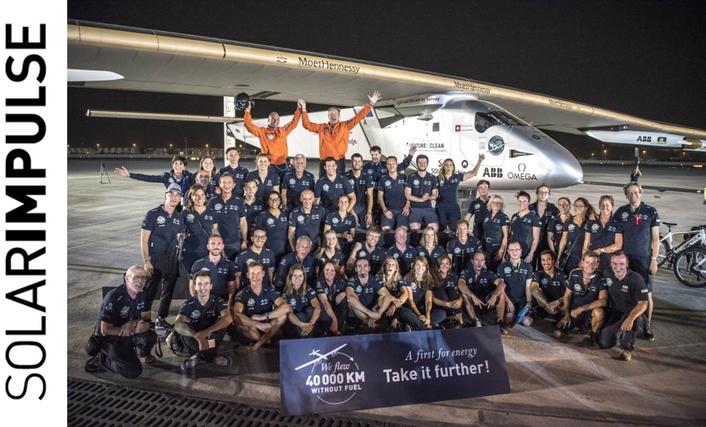 Solar Impulse 2 (Si2), the world’s first solar-powered plane able to fly day and night without a drop of fuel, arrived in Abu Dhabi by cargo plane from Switzerland. Si2’s crew of 80 technicians, engineers and a communications team will spend the next week re-assembling the giant plane and readying it for public display this month at Abu Dhabi Sustainability Week (ADSW) in advance of its March take-off on its round-the-world flight.

Masdar, Abu Dhabi’s renewable energy company and official host partner of Solar Impulse, has arranged for Si2 to be assembled and housed at Al Bateen Executive Airport in the heart of Abu Dhabi. Students and guests attending ADSW, hosted by Masdar between 17 and 22 January 2015, will have the opportunity to meet the pilots and learn about solar Impulse 2. 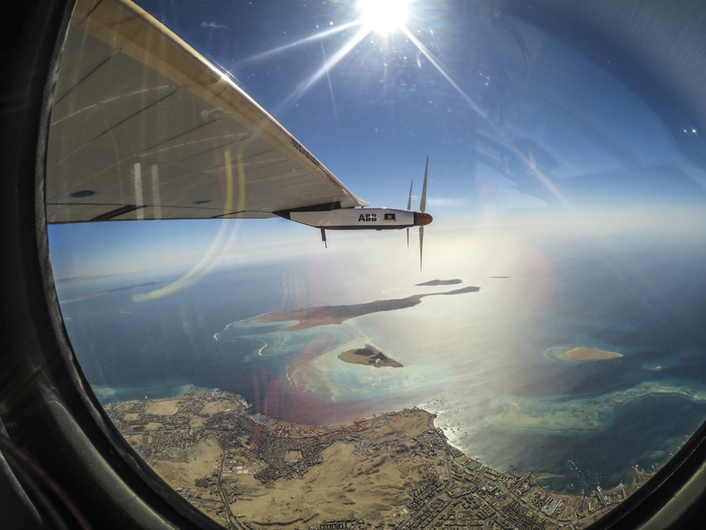 “The presence of Solar Impulse in Abu Dhabi – and its journey around the world – is a historic achievement that will leave a lasting impact on Abu Dhabi, the world and the field of science,” said Dr. Ahmad Belhoul, CEO of Masdar. “Masdar is contributing to Abu Dhabi’s commitment to foster a culture of innovation by pushing the boundaries of clean technology. Partnering with Solar Impulse showcases what human ingenuity can achieve, which will hopefully inspire our youth to pursue careers in science and to advance technology.”

During the plane’s stay in Abu Dhabi, safety tests and training will be conducted to prepare for the historic attempt to fly the aircraft around the world, piloted by its two inventors -- Bertrand Piccard, chairman and initiator of Si2, and André Borschberg, Solar Impulse co-founder and CEO.

“With less than 2 months until departure, our team is eager to reassemble the aircraft and reveal this feat of engineering to Abu Dhabi,” said Borchberg. “The plane was carefully disassembled just a few weeks ago. Component parts were removed, carefully labelled, and packaged for transit to Abu Dhabi. 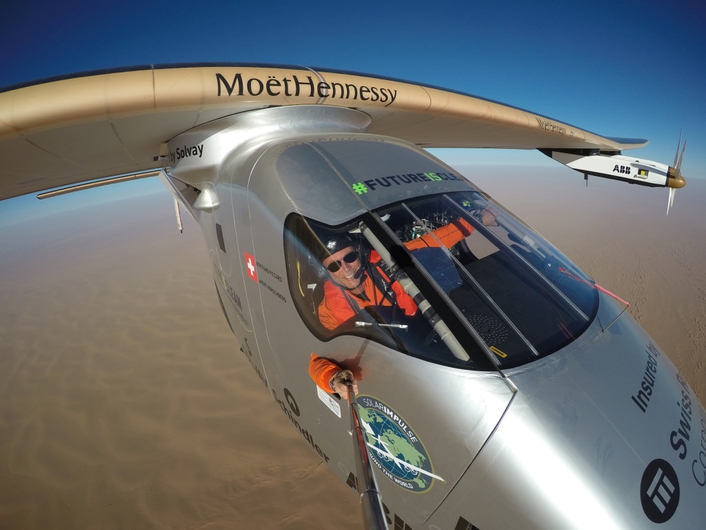 “The pressure is on to test Si2 and prepare for its round-the-world flight,” Borschberg added. “We couldn’t have dreamed for a better host partner than Abu Dhabi. We look forward to working with Masdar as we prepare for our challenging journey around the world. Over the next two months in Abu Dhabi we will be focusing on plane improvements to enhance the likelihood of a successful take off and return to Abu Dhabi.”

Preparations are well under way for the plane’s stay in Abu Dhabi, ahead of the 5 month adventure. The Si2 team and pilots will engage with industry representatives, youth and aspiring engineering students during their time in Abu Dhabi. 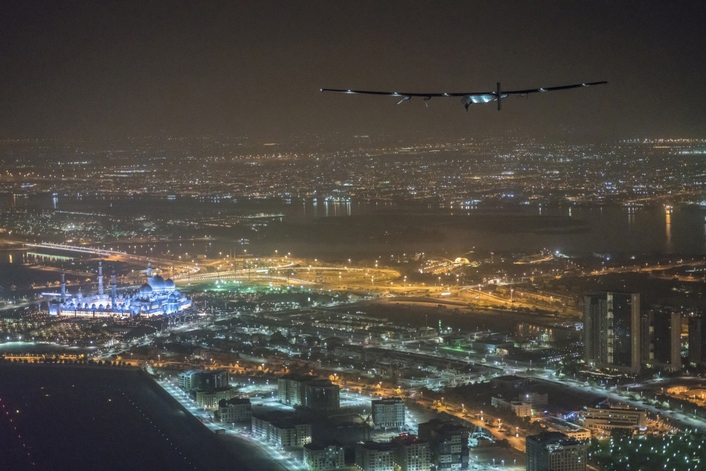 “Abu Dhabi is the perfect environment to spread our message and achieve the ultimate goal of Solar Impulse as the emirate is invested in fostering a generation of pioneers to create a cleaner future,” said Piccard. “Solar Impulse was not built to carry passengers, but to carry a powerful message. Solar Impulse is a physical testament to the importance of innovation and pioneering spirit. It is meant to encourage people to question their old certitudes and habits. It is a powerful symbol of change. We’re grateful that, through Masdar’s support, we’ll have the opportunity to meet with youth and carry this message locally, inspiring the future generation of leaders in this capital of innovation.” 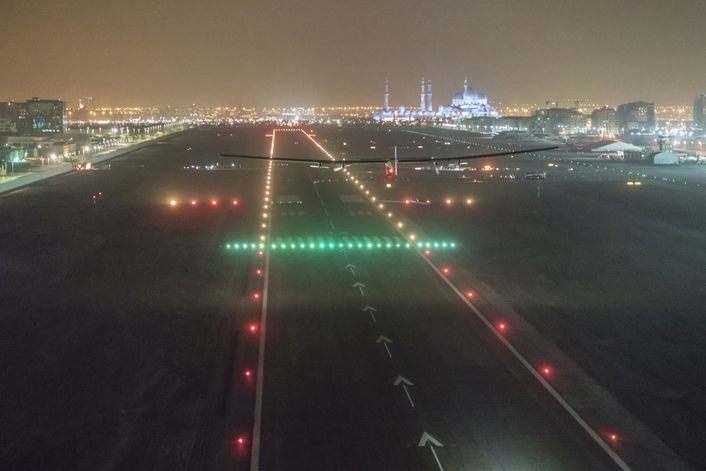 The announcement of Masdar’s partnership with Si2 and the choice of Abu Dhabi as the host city was made on the side lines of the UN Climate Summit in New York. Since the announcement, Abu Dhabi and Masdar have diligently prepared for the plane’s arrival and is confident that the partnership will serve to further enhance Masdar’s already strong engagement with the community.

The round-the-world flight plans to have stops in Asia, the United States, and Southern Europe or North Africa, before returning to Abu Dhabi in late July or early August 2015, depending on weather conditions. The plane’s finalized global flight path will be announced at Abu Dhabi Sustainability Week. 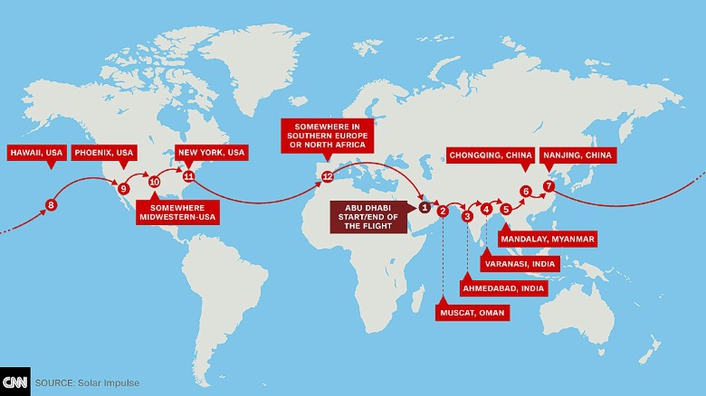 Sun-powered airplane arrives in New York
Piccard lands in Spain after crossing Atlantic in Solar Impulse 2
Panasonic to Broadcast Live the Annular Solar Eclipse from the Summit of Mt. Fuji