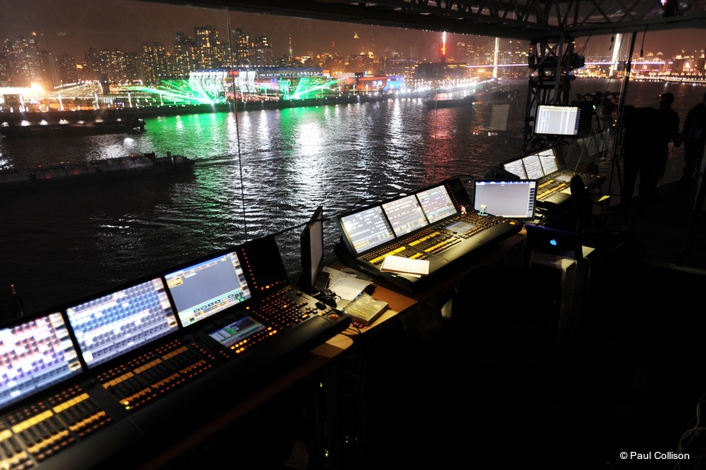 grandMA at Shanghai EXPO 2010
Themed as “Better City – Better Life" the Shanghai Expo 2010 recently started with a spectacular Opening Ceremony, produced by David Atkins Enterprises from Australia, for which a grandMA2 system was used for lighting control. Robert Dickinson and Ted Wells realised the lighting design for this huge event in Shanghai, China. Dickinson commented: “The grandMA2 did the most impossible project ever.”

The 2010 Expo lasts from May 1st to October 31st 2010. Over 190 countries and more than 50 international organisations attend - and 70 million visitors are expected.

Paul Collison, the project's lighting manager, reports: “Our main MA system was built from 3 x grandMA2 full-size, 3 x grandMA2 light, 6 x MA NPU (Network Processing Unit), 32 x MA 2Port Nodes and 8 x MA NSP (Network Singnal Processors) which we used as 4Port Nodes. The grandMA 3D software was used as well for pre-programming and designing purposes. grandMA2 was the ideal platform given the size of the site and the amount of lights. Using grandMA2 meant we could keep the entire show in a single session, which enabled much easier back up solutions across a site of almost five square kilometres.” 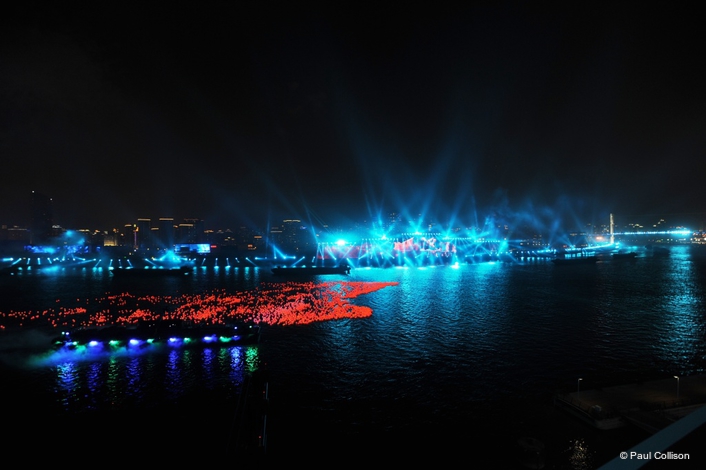 “We had lots of searchlights. Taking advantage of the density of the air gave us some great aerial looks”, explains Collison, “453 lighting positions (towers) were distributed along both sides of the Huangpu River between the Lupu and Nanpu bridges - the Lupu bridge is the world’s second longest arch bridge - and along the top of what is currently the world’s largest LED screen at 265m long and 32m high. A total of 200 x Clay Paky Alpha Wash 1500s, 749 x AutoLT 7kw Xenon searchlights, 477 x AutoLT 4kw Xenon searchlights and 130 x Martin Professional Atomic 3000 strobes gave the Opening Ceremony an unmistakable look.”

Head programmer and lighting director Mark Butts adds: "This was one of the most complex control environments I have ever seen, from the fixture count to the geography, the scale is amazing. We pushed the grandMA2 console hard and it performed flawlessly. The entire control structure was built as one big system with all the control surfaces being able to access any part of the rig from anywhere in the system. This allowed all three programmers and the system techs to work simultaneously on the same system and make global changes, in patch for example, while others were continuing to program." 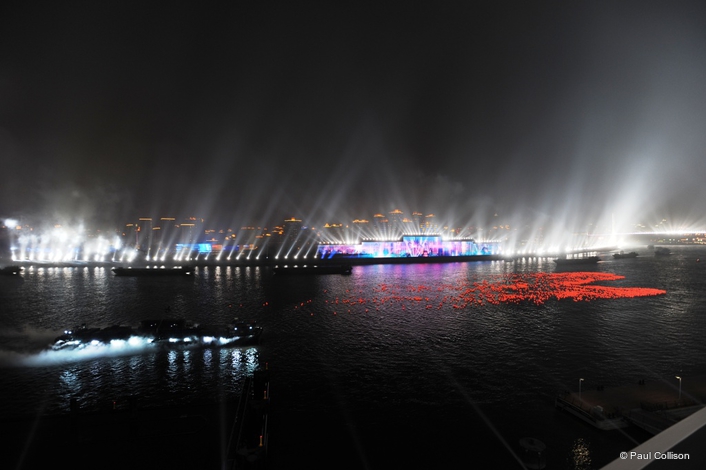 "The way the lights were laid out, in symmetrical towers in straight lines across both sides of the river and bridges, really lent itself to the grandMA style of programming”, continues Marks, “The effects and other features like interleaving selections and adding blocks to effects, a new grandMA2 feature, worked very well in this programming environment. Being able to take masses of lights, slice and dice the selection and manipulate it any way we want, makes dealing with systems like this quick and efficient."

Preceding the outdoor component of the show Mr Sha Xiao Lan of Beijing, was the lighting designer for the indoor show. This part of the evening was controlled by 3 x grandMA full-size and 14 x MA NSP. The indoor component of the show was an impressive array of 500 moving fixtures that lit the cultural and protocol segments for the broadcast. The guests included 20 different heads of state, amongst them China’s President Hu Jintao.

ECA2 from France played an important role in the ceremony, with two barges located on the river providing an intricate water, light and laser display. Each barge had a grandMA ultra-lite console triggering lighting from the site-wide SMPTE timecode transmit.

Also representing France was Aquatic. Famous for their integrated water and lighting displays around the world, Aquatic have installed a 200m wide and 30m high water fountain effect, and programmer Mathieu North of Aquatic used a grandMA ultra-light to programme all the water effects for the Opening Ceremony. The same system will be utilised for a nightly show, with five separate variants over the following six months.

Chris Werner and Noah Mitz worked as associate designers, Mark Butts was assisted by Jason Rudolph and Paul Sharwell as lighting programmer/director. The project was managed by Zhang Wei of ACE Shanghai/Hong Kong, MA Lighting’s distributor in China. Zhang Wei worked with a local contingent of crew that at times swelled to over two hundred technicians. 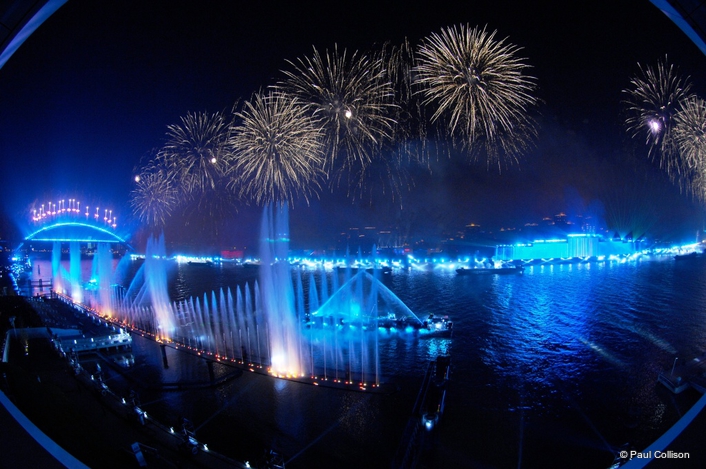 Today, MA Lighting is respected for its technical knowledge and has achieved a unique international reputation for its operational philosophy. The company offers 25 years experience and strictly follows a professional user-centric approach, getting as close as possible to the market via its own international offices and support centres in the UK, North America, Latin America, the Middle East/India, Asia Pacific and Scandinavia/Eastern Europe/Russia – supported by a world-wide distribution and service network.