The three-act melodrama Simon Boccanegra is characteristic of Giuseppe Verdi's determination and modernity. It was staged at the Bolshoi Theatre, which is fitted with a number of Claypaky lights, and broadcast live on a giant screen in front of the theatre itself. This Verdi opera rounded off the La Scala summer tour in Moscow.

Simon Boccanegra is an opera by Verdi based on a libretto by Francesco Maria Piave, inspired by the play of the same name by Antonio García Gutiérrez. It premièred on 12 March 1857 at the Teatro La Fenice in Venice. Over twenty years later, Verdi rewrote the score of the opera, and Arrigo Boito, the future librettist of masterpieces such as Otello and Falstaff, changed the libretto. The new, final version premièred on 24 March 1881 at La Scala in Milan.

And it was again at La Scala, in June this year, that the opera returned to the stage, resuming the 2010 stage design put together by director Federico Tiezzi. The production also saw the long-awaited return of Myung-Whun Chung to the podium, one of the greatest Verdi conductors currently on the scene.

Marco Filibeck, lighting director and designer at La Scala, designed the lighting for the 2010 and 2016 editions and chose the lighting designer Valerio Tiberi to illuminate the opera in Moscow.

Marco, what does it mean to take over a show that already has a lighting design?

“It is a different job to designing the lighting from scratch. In this case, the lighting designer has the task of reproducing a lighting design that has already been seen. With all the constraints that need complying with, this task requires great technical and other skills. This is precisely what skill and ability should be. Valerio and I held a preparatory meeting here at La Scala to get a common visual reference, so he would manage to recreate the same visual images in different circumstances, even with a different set of lights.” 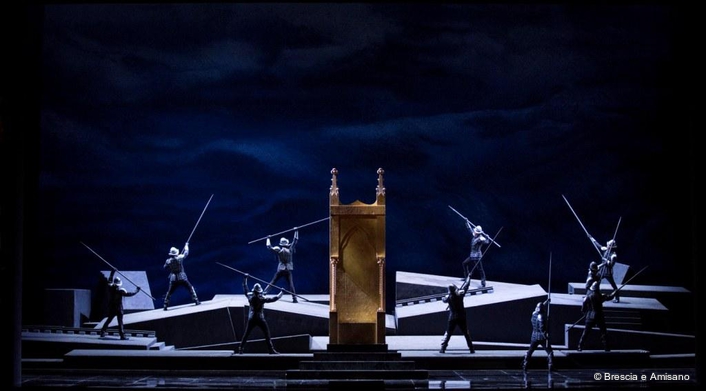 What freedom does the new lighting designer have away from the man who created the original design?

“Whoever takes over the lighting design of a show aims to recreate the original faithfully. Obviously, in this task, there is a whole host of adjustments you can make, as long as you do not lose the original intent and general approach. Nothing must be radically altered.”

He then had to reproduce the same lighting effects with different fixtures, check their colour parameters and correct them. He had to check the light intensity, and reproduce the beam angle of each light and the quality of the shadows.

“There is scope for freedom, and it lies in using great technical skills. Within this task, Valerio may make choices and decide on alternatives when a given effect cannot be reproduced in exactly the same way. However the alternatives you choose must be aimed at getting as close to achieving the original effect as possible.”

The Alpha Wash Halo 1200s were used, for the warm tones of their lamps, instead of the PCs and Fresnels with L200 gels used at La Scala. They were rigged as side-lighting on the side trusses, 13 foot off the ground, and on the first lighting bridge in the choral scene. The Alpha Wash 1200s replaced the back-lighting (scenery, characters and chorus) and proved to be versatile both owing to their light output and ability to reproduce the original colours.

After careful adjustment, the Alpha Profile 1200s reproduced the cool shades typical of high pressure HMI lamps. The A.leda Wash K20s did not replace lights included in the original design. They were used as accent and compensation lights in the choral scenes. Thanks to the versatility of the LEDs, there were no problems in recreating the original colours required. 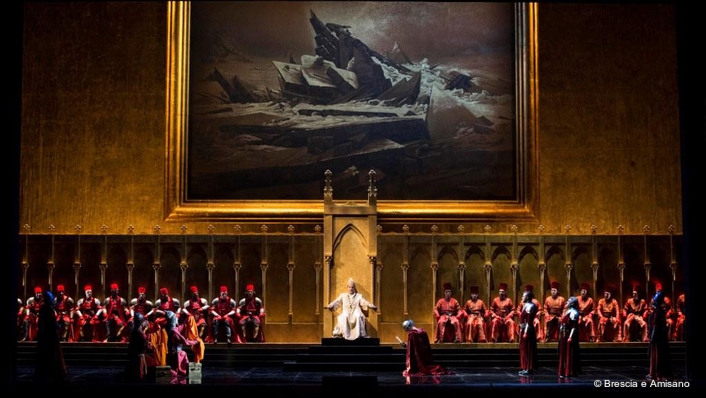 Does a person who reproduces a show have a particular visual talent? Do they have the original show documentation?

“Both: the documents contain the technical data needed for a general idea of the original lighting design. However, in this case, it was not possible to simply copy the rig design across and match the lights with each other (light number 1 in the drawing with light number 1 in the theatre, etc.). The whole show needed reprogramming from scratch because the lighting desks were different and the lights were different. The rigs were very different to each other.”

“But with a different rig, it is possible to reproduce a lighting design that is identical to the original. To do it, you need a visual memory, talented operators, and the specific technical documentation. Videos of the show are equally important. Besides showing the movements and transitions, they convey impressions of the original atmospheres.”