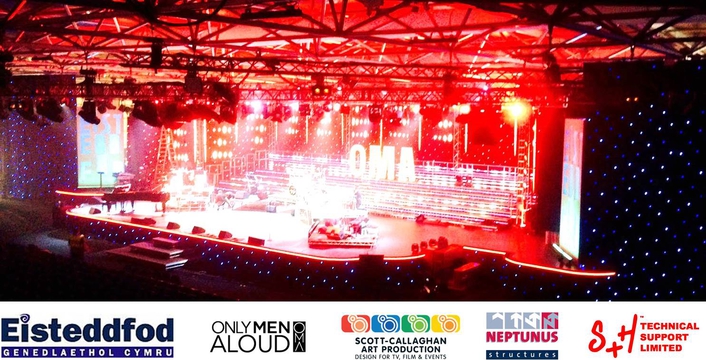 Set designer Sid Scott worked closely with lighting designer Nigel Catmur on crafting the aesthetic for the main hub of the event, the Pafiliwn, an 1800 capacity theatre space which hosts various live performances, competitions and the main crowning ceremonies held throughout the week long event.

This year for the first time the Pafiliwn was staged in a new venue - a 60 metre long by 40 metre deep pavilion structure from staging specialist Neptunus Structures, based on their fully insulated Evolution II temporary building system and featuring around 9 lofty metres of headroom.

Nigel has worked on the National Eisteddfod for many years and this year wanted to ramp up the performance experience, so in collaboration with Sid suggested an RGB starcloth to wrap the entire arena. This gave guests a 360 degree enveloping experience as well as an interesting back-filler for all the various camera angles used by the BBC and S4C (Welsh language) broadcasts from the event.

There were additional S+H starcloths also used on the main stage which were combined and layered with LED screens, moving lights creating gobo effects and a removable glitter gauze on a tab rail supplied by S&H, all of which could be used in different combinations to create dynamic backdrops / settings for assorted artists and presentations happening onstage.

Scott Callaghan Art production has been working with S+H for around 4 years.

The two companies first met when Sid required some starcloth to fit a design created for an S4C concert series called Noson Lawen (roughly translated as ‘Merry Evening’, a long running Welsh language programme first aired in Wales in 1982) They wanted a stage surround and a backdrop that could change colour through lighting quickly and easily to produce different moods for each song or act. 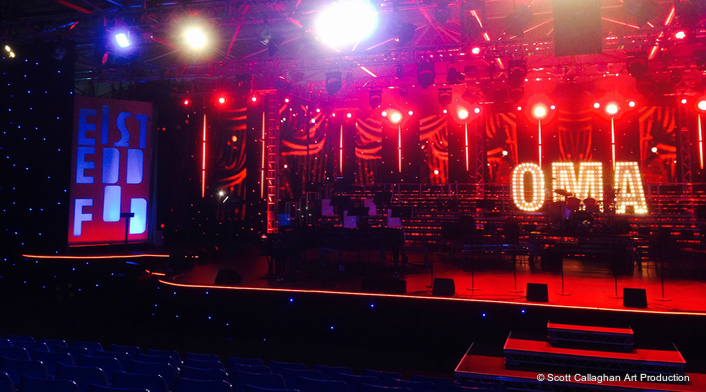 “S+H are great to deal with” Sid comments, “Always friendly and very helpful in getting whatever product we need to wherever we need it in the far flung depths of Wales”.

In addition to the RGB starcloths, they also regularly hire S+H kit like their 6 metre telescopic pipe-and-drape and use it to create pop-up studio spaces.

S+H’s Terry Murtha states, “It’s always a pleasure to deal with Sid and Alison at Scott Callaghan … their work is varied and different and they have a knack of using our products in innovative ways which look great and refreshingly different”.

Sid worked closely with the Eisteddfod’s head of technical Huw Aled Jones and construction co-ordinator Tony Thomas & team. Lighting equipment for the Pafiliwn was supplied by ELP and the various scenic elements by Get Set Scenery.