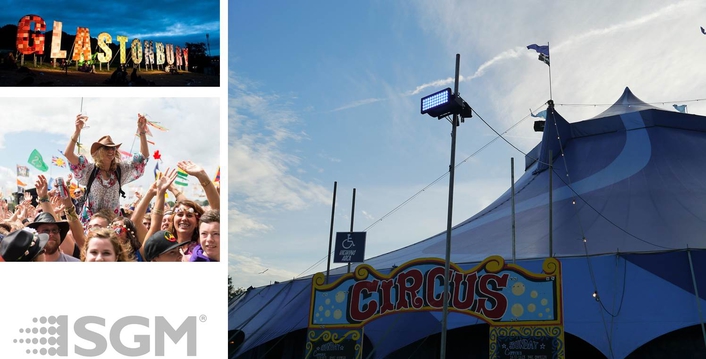 While 14 of the G-Spots, provided by HSL, graced the main stage (seven on each PA wing) elsewhere the scramble was on to secure inventory, in particular, for the popular and award-winning P-5 washlight.

Main stage lighting was supplied by Neg Earth, and with The Who headlining, their LD Tom Kenny, had nothing but positives to say about G-Spot. “I was impressed with its power, and the way it fought through everything else. I also loved the colour and they matched the other fixtures well.”

Enlightened Lighting’s Simon Marcus was one who drew on the P-5s to light the iconic Ribbon Tower — a beacon that can be seen right across the site. He praised the saturated colours produced by the ultra-efficient washlight, having developed Patrick Woodroffe’s original theme (to Misty Buckley’s design) and moved it from the discharge world, with 24 P-5 RGBW and 8 x TW (Tunable White) washes, subbed in from Vortex Lighting by Neg Earth, on the Minaret style top. “I wanted a tungsten look for the top and so I took the TW’s colour temperature down to 2700K,” he explained. “These were run mostly static but every 10 minutes there would be a brief on/off to create the surprise factor.”

He equipped the 24 on the ground, set in pairs with the 21° medium lens. “The structure measured 29m from the top to the bottom and the diameter of the ribbons was 7.2m,” he said. “The P-5s are sufficiently powerful to fire all the way up to the top and we could change the whole tower and snap the colours instantly from warm saturated reds to cold blues with a spin chase.

“This is an observation tower — visible right across from the farm — and people use it to navigate from. It was important it was lit through 360° but this required a careful focus so as not to blind people.”

In conclusion he said the show ran effortlessly from just before dusk to dawn (9pm-5am). “The P-5 is far superior to the old discharge lights used previously,” he observed. “The colour saturation is better and the low power consumption is a factor. In terms of usability it’s a lot less intrusive — and there’s more space in the truck.

“The SGM products were brilliant in every respect, and lovely to work with.”

Over at the John Peel Stage Imax Lighting’s Gary Churchill brought in a further nine P-5 RGBW washes — part of the floor package for La Roux’s set to meet the rider from their lighting designer, Andy Liddle. These were used both for lighting their backdrop and as floor cans on the edges of the risers.

Another company from the region that has been associated with Glastonbury since 2007 is Alister Pook’s SWG Events.

This year, their lighting manager Ben Perrin specified eight SGM X-5 strobes and four P-2 washlights for the Park Stage, with the P-2 units used to uplight the Park’s new pillars. “As this was a very important feature, the design team wanted to see them illuminated with soft fading colours which would frame the stage during the evenings,” he explained. “They were ecstatic with the results.” 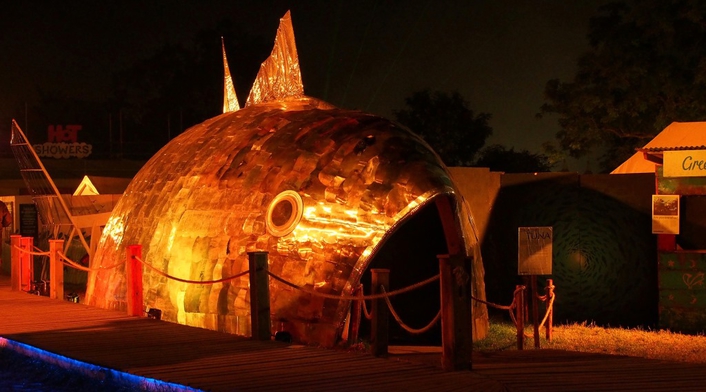 And for BBC Introducing Perrin specified 12 x SGM Q-2W white fixtures and six SGM P-2 fixtures, adding: “I wanted a versatile strobe / eye candy light with a small footprint which would complement the sleek lighting design. At the same time I also wanted as much colour as possible from a small compact fixture which the P-2 could deliver.

“In fact everyone was amazed at the amount of output the P-2 fixture produced, with incredible smooth even colours.”

As a result SWG Events now own all three SGM products. “They left such a good impression that we had to buy them,” was Perrin’s rationale.

The fixture also met the BBC’s requirements for a flicker-free LED solution. “The Q-2W, with the 12 individual cells per unit, I knew would produce some unique effects, and the fact I could put so many units into a venue without affecting the overall power consumption was a major bonus.”

Finally, Pussy Parlure, overseen by SWG Events’ Alister Pook, featured further P-2 washes and SGM’s LS3.75 video screen. “We had a very difficult brief from the venue designer (Rocket) who wanted lots of coloured light but hidden fixtures,” said Perrin. “The purpose of the venue was to be very atmospheric so we put four P-2 units in the king poles to illuminate their logo, along with eight washing the room and four to create a glow behind the slatted walls.” 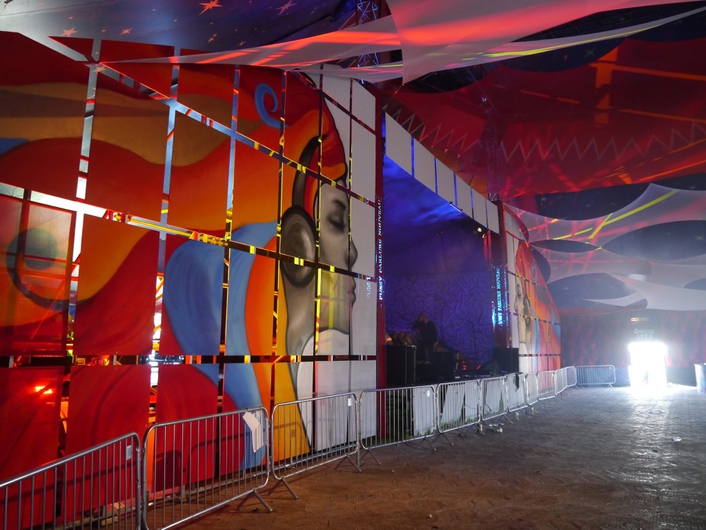 It had been a thoroughly satisfying outing for SWG, concluded Perrin. “This year we had many new briefs to fill with regards to the BBC and venue designers — and the feedback was really positive, with many venues requesting the same products and designs again for the future,” he said.

And much of the success was due to the SGM products. “They were fantastic and exceeded every expectation we had,” he admits. “Many touring lighting designers were blown away by them. In particular they loved the little Q2-W fixtures in just a strobe function — and once we showed them the flexibility of the eye candy effects it was incorporated into every show.

“The house engineers also loved the ease of rigging the fixtures with great little features such as the retractable safety bond point. The build quality is solid and you can feel that the product is well made straight away — everything was 100% reliable. In fact SGM provided us with the tools to have the most successful Glastonbury Festival yet.”

Also putting a highly creative spin on events using SGM tools was Ben Bailes at Oculux, who is the long-term lighting designer for Greenpeace at Glastonbury. 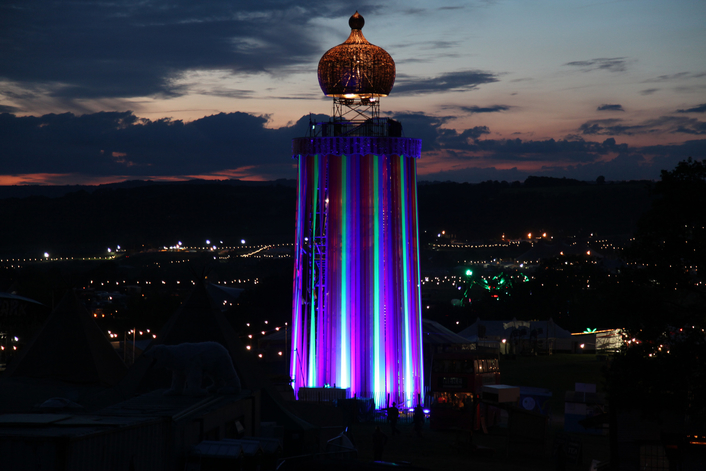 This year’s theme was sustainable fishing quotas and the centrepiece was a monster trawler called the Cornelis Vrolijk. Like a themed attraction it took visitors through a real life experience, showing what happens to tuna fished over quota and thrown back — and this also included a ‘Crawl / Wiggle / Slide’ area which was lit separately (‘Crawl’ formed the first phase of a scary experience (taken by the visitor in a boiler suit and a ‘fish head’ hat).

Bailes was tasked with enhancing the shock by creating total 3D immersion, both sonically and via illumination, and accomplished this with tools from SGM Lighting. 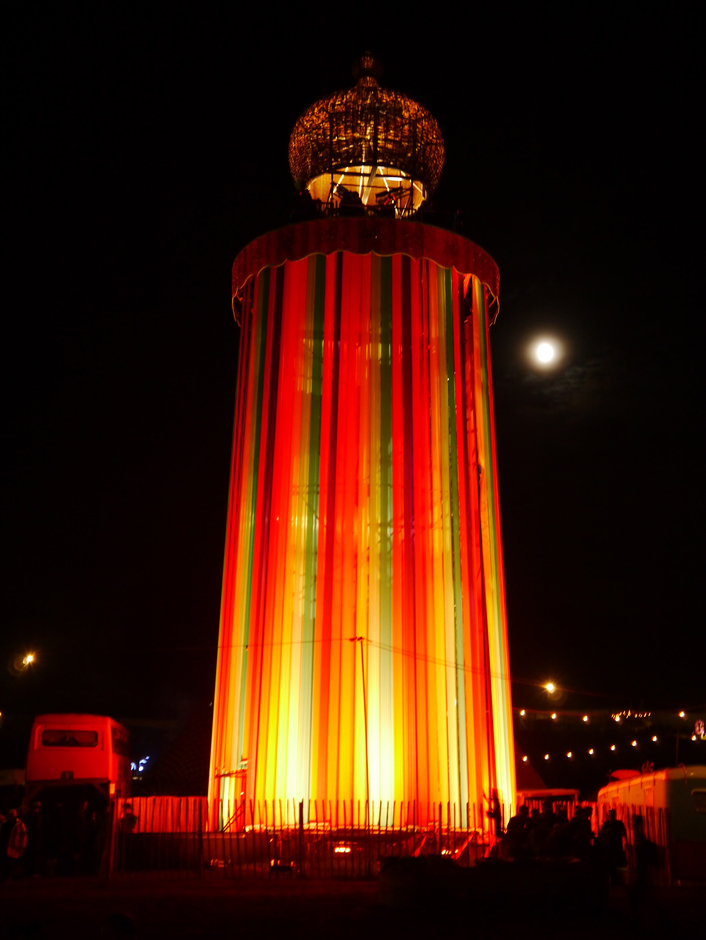 Explaining his choice, Ben Bailes said, “I had seen the P-5s at PLASA and been very impressed — and White Light mentioned that they had them. I looked at the optics and they were so bright I thought I would need to dim them but in the end I used a 21° medium lens at full brightness, and they produced excellent colour.”

As for the LB-100 Bailes used five strings in each of the 31 bays in the Crawl section. “I was looking for a pixel product that could be hung across four or five metres. I had seen these high resolution festoons that would change colour before and knew it would be ideal so I contacted Ian [Kirby of SGM UK) and realised it was a hirable product.”

By using movement sensors his aim was to create “clear 3D waves of lighting to match the swell of the ship.” The LB-100s were Madrix triggered by a Raspberry Pi, while 'The Engine Room' (the Greenpeace stage area) was on a Vista M1 wing, with SGM X-5s among the effects. The field lighting was run from Showcad Artist. 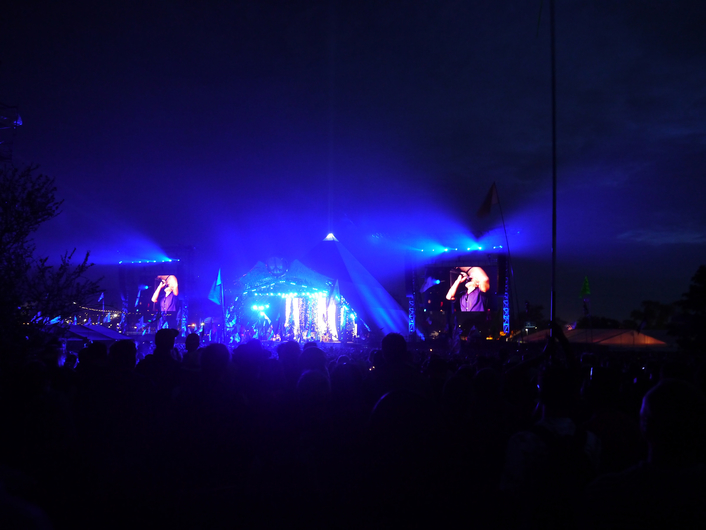 “We like to use the best tools for the job and in this instance SGM was the obvious choice,” he summarised, at the same time praising the support given by White Light and Blueprint.

And with further P-5s featured in the Circus area (and elsewhere on the site) there is no question that SGM left a powerful imprint over the Worthy Farm festival site in 2015.