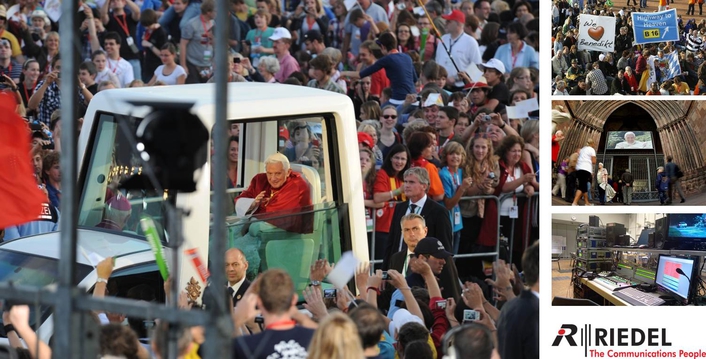 Riedel RockNet and MediorNet networks were outstanding and helped to achieve maximum performance
The organizers of the papal visit to Berlin, Freiburg and Erfurt used comprehensive communication and AV systems from Riedel Communications to ensure successful events. Riedel, one of the leading manufacturers of real-time networks for video, audio and communications delivered a solution that included digital trunked radios (TETRA), Artist digital matrix intercom, as well as the fiber based media network MediorNet and the digital audio network RockNet.

The papal visit to Germany was an event of gigantic proportions. Both the strict security requirements as well as the technical demands were extremely high for the five main events associated with the visit. It was crucial to build a reliable communications infrastructure in each location that was also secure from eavesdropping. In addition, the locations needed to be ready to distribute audio and video signals to both broadcast networks and to the on-site video walls.

The two largest events were held in Freiburg, including a vigil and the farewell celebration at the local airport. Two interconnected TETRA cells with four base radios were used to guarantee reliable radio network coverage across the entire Freiburg region. The cells were connected via a Riedel Headliner RF link. Headliner RF links allow 25 mile long bi-directional connections with a bandwidth of up to 300 MBits/s.

The security personnel and organizers in Freiburg used 1,000 professional digital handheld radios with over 50 TETRA groups. Digital audio quality and the ability to talk directly to specific users of the radio network are just two of the many advantages TETRA offers. Furthermore, TETRA is secured against eavesdropping and was especially designed for important applications such as the papal visit. More than 300 professional analog radios supplemented the TETRA installation. Riedel Connect Duo and Connect IP interfaces integrated the radio network into the Artist digital matrix intercom system thus forming a single communications infrastructure. The Artist system consisted of three Artist 128 mainframes that were connected via a redundant fiber based ring. A total 80 Artist 1000 series control panels and 30 Artist 2000 series control panels were used. To transmit the radio broadcast, the German public broadcaster SWR used a Riedel Headliner link that also integrated additional departments, such as the production department, into the infrastructure.

SWR used a Riedel Headliner link to integrate additional departments, such as the production department, into the infrastructure

The organizers of the events in Freiburg used a combination of Riedel MediorNet and RockNet to distribute audio and video signals. More than 40 MediorNet frames were deployed at the events. Furthermore, the MediorNet installation was used as a remote control system for the d&b PA system.

"The Riedel RockNet and MediorNet networks were outstanding and helped us achieve maximum performance," noted a representative from Crystal Sound, the PA supplier for the visit in Freiburg. The digital audio network RockNet was integrated into MediorNet's fiber based infrastructure and connected the altar, the audio control room and the various PA positions to a single network. A total of 50 RockNet modules were used in Freiburg. Furthermore, MediorNet was used to transport video signals to individual video walls. Additional wireless video links were used as a redundancy layer. 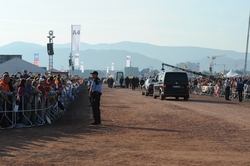 A TETRA base station provided a digital radio network at the Olympia Stadium in Berlin. A total of 150 TETRA radios were integrated into the stadium’s Artist infrastructure and were used to allow direct communication between the radios and the Artist system.

The installation for the celebration of mass in front of the cathedral in Erfurt consisted of a single TETRA cell and was similar to the system at the Olympia Stadium. The TETRA cell provided the network for 150 Motorola MTP 850 handheld radios. Enabling communication between the members of the security staff and volunteers was an essential part of the security and safety plan from TRIALOG, the consultant agency that handled these areas. All gates to the cathedral’s square were equipped with speakers connected to Riedel TETRA interfaces that allowed individual gates directly to be addressed directly. An FM transmitter and 20 professional FM receivers were used as a redundant backup and for safety announcements.

For the event at the pilgrimage church Etzelsbach and the mass on Cathedral Square in Erfurt, Riedel RF headliner links were used to transport various video signals to the video walls.