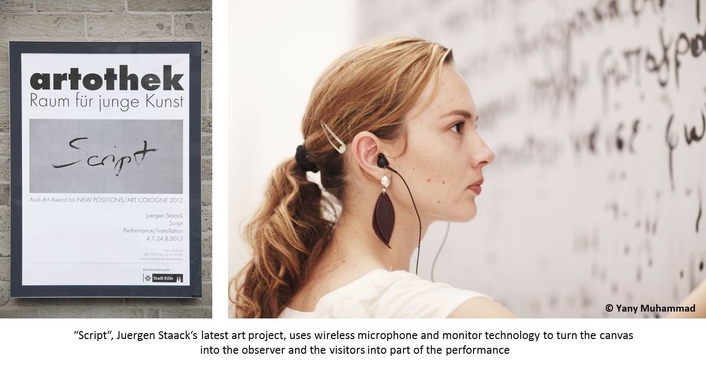 The writers hear the describers‘ observations and perceptions via monitor receivers and write them on the canvas
Picture the scene. You are visiting an art exhibition, but the only things you can see are blank canvases. Yet the room is filling up with expectant visitors, and four people begin to fill the canvases with words. Suddenly, you recognise yourself in those words! This is exactly what has been happening in early July at the Cologne Artothek, where Juergen Staack is presenting “Script”, his latest art project, using Sennheiser wireless technology.

For the “Script” performance, Juergen Staack worked with wireless microphones and bodypack receivers. At the preview on 3rd July, four ladies with different mother tongues mingled with the visitors – and they described what they observed at the event to their writing partners via a pocket transmitter with headset microphone. Each of the writers heard these descriptions in English, Russian, Japanese or Greek via a small monitor receiver with earphones and wrote them on the canvas using a paintbrush and a special fluid. 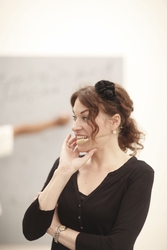 “In Script, the traditional relationship between observer and art is turned on its head: if anything, the canvas seems to perceive the observer,” explains Juergen Staack. “The ‘describers’ are the ‘eyes’ of the canvases, as it were; the canvases are like mirrors working with abstract words rather than direct reflection.”

The transitory and fleeting nature of observation and of the thing observed is highlighted by a special coating on the canvases: after a while, the liquid dries and disappears, so that new discoveries can continuously be recorded before they in turn disappear into the past.

In order to ensure that the performance would remain accessible, Juergen Staack had it filmed the following week and converted it into a video installation together with the canvases, which still show traces of Roman, Greek, Arabic and Japanese text. You can view this installation at the Artothek until 24th August. 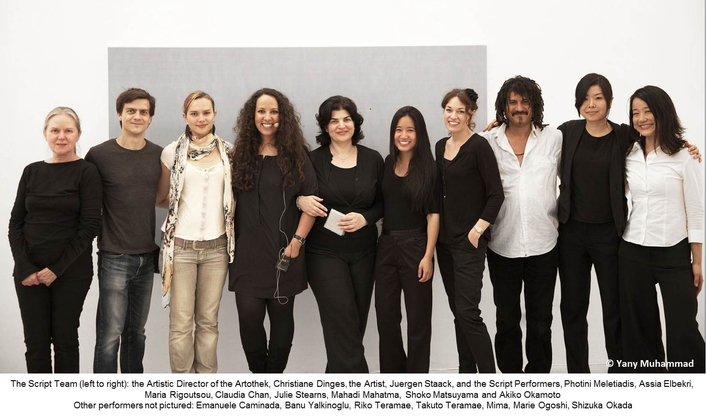 The Sennheiser Group, with its headquarters in Wedemark near Hanover, Germany, is one of the world’s leading manufacturers of microphones, headphones and wireless transmission systems. In 2012 the family company, which was founded in 1945, achieved a turnover of around 584 million euros. Sennheiser employs more than 2,300 people worldwide, and has manufacturing plants in Germany, Ireland and the USA. The company is represented worldwide by subsidiaries in France, Great Britain, Belgium, the Netherlands, Switzerland and Liechtenstein, Germany, Denmark (Nordic), Russia, Hong Kong, India, Singapore, Japan, China, Canada, Mexico and the USA, as well as by long-term trading partners in many other countries. Also part of the Sennheiser Group are Georg Neumann GmbH, Berlin (studio microphones and monitor loudspeakers), and the joint venture Sennheiser Communications A/S (headsets for PCs, offices and call centres).

David Bowie is: Sennheise...Together Sound and Vision
Sennheiser Provides ‘In...nes for YouTube Orchestra
The Whisper of the Stars in Siberia