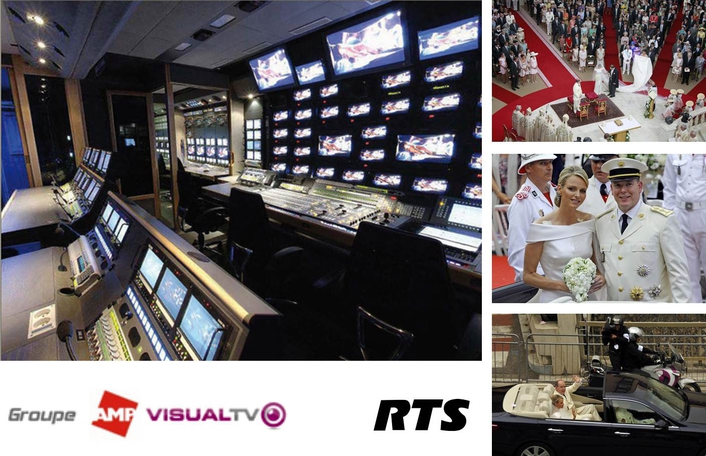 AMP Visual TV Group was commissioned to provide the live feed for broadcasters in France and Monte Carlo
The wedding of Prince Albert of Monaco to Charlene Wittstock will be remembered as one of the media highlights of the year 2011: countless TV stations all over the world broadcast the entire ceremony live. In fact, the passionate enthusiasm of the population of Monte Carlo spilled over into neighbouring France with no less fervour, with over 7.5 million viewers following the proceedings live in the Hexagon on July 1st and 2nd.

Well-schooled in the handling of major events, the French broadcasting enterprise AMP Visual TV Group was awarded the TV production of the wedding. They responded by using resources suited to the majesty of the occasion, deploying no fewer than three outside broadcast vehicles and a 136-man team to provide its various customers – France Télévision, TF1, and TMC – with sound and images of the highest quality.

A key role in the logistics of the live telecast was played by communications: with the outside broadcast vehicles parked a good kilometre from the various locations in which events were unfolding (the palace, the church of Sainte Dévote, the Hotel du Palais, and the Hotel de Paris), wireless communication was therefore the best suited choice, and the size of the team posed a real challenge to the communications system selected. "We had 136 technicians on site," explains AMP Visual TV Group’s Audio Operation Manager Pierre Barbier, "so we needed interference-free and reliable equipment. After all, if things go awry in events such as these, there's no second take!"

For this reason, RTS/TELEX equipment was employed in all three OB trucks: In the "Enterprise", a 96 x 96 Advanced Digital Audio Matrix (ADAM) and various keypanels from the KP12 and KP32 ranges (KP32, KP-32-6 and KP32 CLD) supported the broadcast for France Télévision. In "Truck G", a 48 x 48 ADAM matrix along with twelve KP-32 and KP-12 keypanels performed the same task for TMC.  In “Truck 8" an 80 x 80 ADAM with eighteen keypanels (KP-32, KP-32-16, KP-12 and KP-412) did the honors for TF1 – all of the systems have previously proved their quality and reliability countless times in the transmission of high-calibre events such as the Olympics, the World Cup, and the Super Bowl, all followed by vast audiences worldwide.

Here, at the Monegasque society event of the season, these systems once again performed flawlessly. "The production ran like clockwork, with no technical hitches whatsoever," reports Nico Lewis, RTS/TELEX's Senior Sales Manager. "The AMP Visual TV Group has been a faithful customer of our French distribution partner Pilote Films for many years.  This is clearly why they opt for RTS/TELEX intercom systems in 17 of its 22 outside broadcast vehicles."