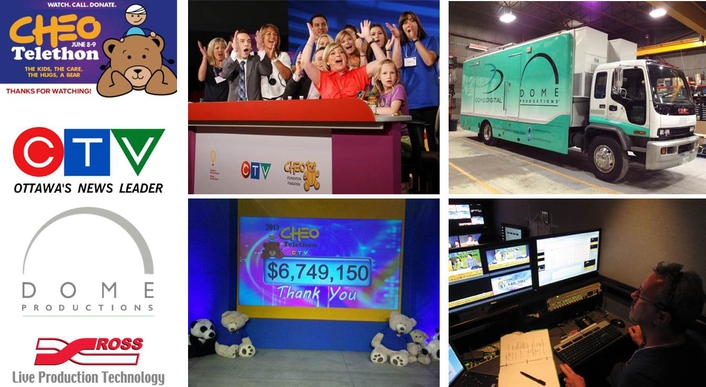 For the two day telethon held on June 8th and 9th, XPression was installed in a DOME Productions mobile unit
Ross Video provided an XPression Real Time Motion Graphics System and personnel in support of the 30th Annual CHEO Telethon on CTV Ottawa. Held at Ernst & Young Centre in Ottawa’s South end, the 24hour telethon raised $6, 749, 150 for The Children’s Hospital of Eastern Ontario.

“I was very happy with XPression during the CHEO Telethon,” said Ben Heslinga, Director of the 2013 CTV Telethon for CHEO. “What pleased me most was the ability to have a donor crawl with the animated banner and full screen animated background on the second frame buffer. I am looking forward to adding the clock with music and many other features in upcoming telethons.”

“What made this such a success this year, is the fact that unlike previous years, both channels outputting animations and effects never crashed,” said Vince Fracassi, Product Verification Specialist, Ross Video. “We were never delayed by having to wait for a graphic to load – an important feature as the shows need to follow a script and timing is essential.”