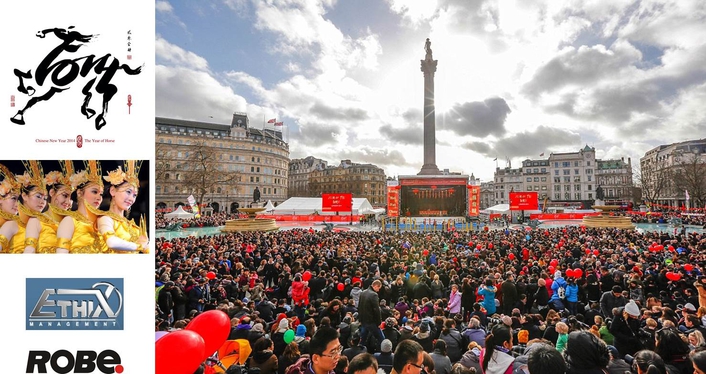 .
This year, Robe was already involved in some of the highest high profile New Year’s shows around the world  including Berlin, Las Vegas and New York … and once again its moving lights were right at the centre of the action for Chinese New Year celebrations in London’s Trafalgar Square, featuring an afternoon of onstage entertainment culminating in a massive son et lumière extravaganza finale show to welcome the Year of the Horse.

Organized by the London Chinatown Chinese Association and supported by the Mayor of London and Westminster City Council, the event - which lasts all afternoon and covers activities happening in the key areas of Leicester Square, Soho, Charing Cross Road and Chinatown  -  celebrates Chinese history culture and art, and is the biggest outside Asia.

Jones has been involved in lighting the stage for the last seven years, and for the last four, the technical production has been co-ordinated by industry maverick Dick Tee from EnTeetainment.

Three straight trusses were dead-hung below the roof of the 15 metre wide Star Events Alpha Stage to provide all the onstage lighting positions, to which were added eight each of Robe’s ROBIN Pointes, ROBIN MMX Spots and ROBIN LEDWash 600s and 16 x ROBIN LEDBeam 100s. For general washes, they added in some 2K fresnels.

The design had to work equally well for daylight, twilight and darkness, so choosing the right luminaires was essential for that as well as to embrace a number of different performance genres including Chinese Opera, traditional dance, acrobatics and martial arts.

The Pointes are a brand new purchase for Ethix Management and are the second batch – the first is currently on a long term hire in Nigeria – Jones needed more for immediate access in the rental inventory.

“I am exceedingly happy with the Pointes,” states Jones. ‘They are far better than any competitor product!”

As well as lighting the onstage action, the Pointes were used for strategic cues to highlight two horse statues on the public art plinths around the Square – two fixtures per statue did the job brilliantly.

Jones likes the gobos in both MMX Spots and Pointes and comments that the brightness of both types is “Excellent” and also that they were ideal for brightening up performers during the daytime sections of the show.

He first made contact with Robe UK at the end of 2012 when deciding to buy Robe for a year-long installation in Derry in Northern Ireland used as an event space for its year as UK ‘City of Culture’ in 2013. Impressed with  the service and support, since then he’s invested in many more fixtures from most of the current Robe ranges.

For Chinese New Year in London Lighting Operator Paul de Villiers, a big Robe advocate, declares,  “The Pointe is my absolutely favourite light at the moment”.

He first used them on the Temple Stage at Glastonbury Festival last year. “They are fantastic for aerial effects and blasting the stage,” he enthuses. “The frost and the zoom are fantastic, and they worked really well in daylight too as the lights are so powerful”. 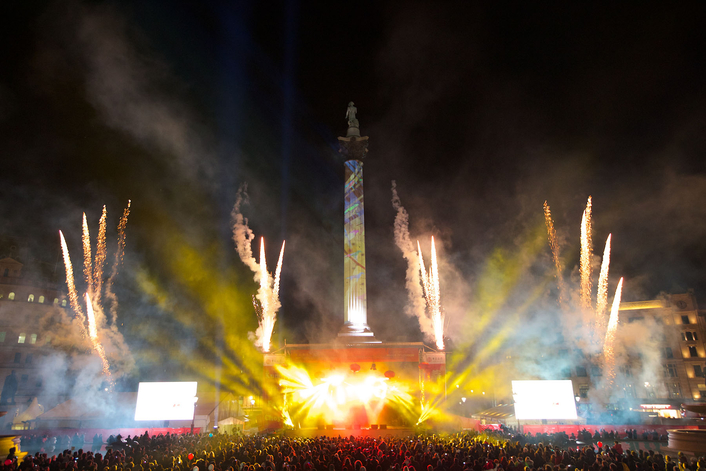 He also likes the LEDBeam 100s for their tiny size, which means they can be rigged almost anywhere, but for all that smallness, they “Pack a real punch”.

He used the MMXs on the show for the usual spot functions, breakups and texturing and says they complimented The Pointes nicely.

He sums up with, “They are very versatile fixtures that can be used almost everywhere”.