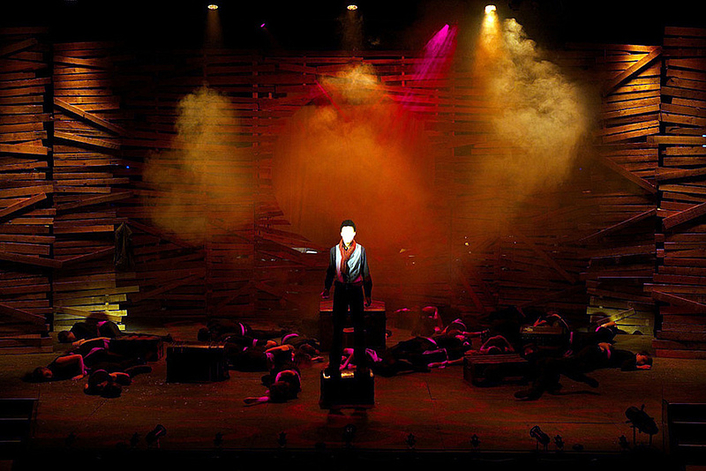 .
Lighting Designer Luke Harnett knew exactly which Robe moving lights he needed to specify to give a range of creative options needed to light the recent stage production of Bernstein’s comic operetta, Candide (based on the original powerful satire by Voltaire) at the Amey Theatre, Abingdon School, Oxfordshire, UK.

He specified six Robe ROBIN DLX Spots and six LEDWash 300s for the production, which were supplied by Tring based Universal Event Productions – which has a large stock of Robe fixtures. These were utilised along with a variety of generic lights  for the show.

Harnett, who currently works full time at the theatre, has been using Robe products for about the last five years and is a keen advocate of the brand.

The latest Robe technology was chosen to be at the heart of the lighting rig for Candide  for several reason.

Firstly the CMY colour mixing. The show visits numerous locations in Europe, the Americas and the Ottoman Empire as the complex jittery-paced and fantastical 30 chapter narrative unfolds over two hours - each scene morphing into the next without blackouts! So they needed the superior smoothness and subtlety of fixtures with this feature.

Secondly the zoom on both the LEDWash and the DLX Spots was a massive advantage. The different countries visited by the show were represented by anything from full scale all-singing-all-dancing ‘production’ musical numbers to tiny pools of light for a solo. With the   15 – 60 degree zoom of the LEDWash and the 10 – 45 degree of the DLX, the whole stage could easily be washed.

Another issue was the limited amount of hard power available onstage at the Amey Theatre, so an LED moving light solution brought plenty of latitude to the design. The DLX’s output beats a 1200W series fixture … but it draws only 250W of power.

Finally, they chose Robe for the renowned reliability of the products and because “Robe is a real driver of LED lighting development in the entertainment industry” concludes Harnett.

The six LEDWash 300s were used primarily as back-wash with three fixtures on two house bars.

Four of the DLXs were positioned directly above the main stage performance area, with two on the FOH perch, all utilised for creating scenic washes, breakups and specials.

Many of the scenes were in water related locations requiring suitable animations and movement. “The DLXs did the job perfectly, ” explains Harnett, “As well as producing animations for horses being ridden through various countries, snow, clouds, other weather based effects … and many more”.

On the LEDWash 300, in addition to the colour mixing, he likes the “Amazing” zoom, the light weight (8.2 Kgs) and the prominent and easily readable control screen – also a feature of the DLX.

Harnett programmed and operated Candide’s lighting using a Zero 88 ORB console, and worked closely with video / set designer Rory Fraser Mackenzie on the highly praised visual elements of the production, which ran for three days and was completely sold out.

It was directed by Matthew Hawksworth and Jeremy Taylor and performed by a large cast from Abingdon School and St Helen’s & St Katherine’s School.