Robe Shows its Talent at the Viña del Mar Festival 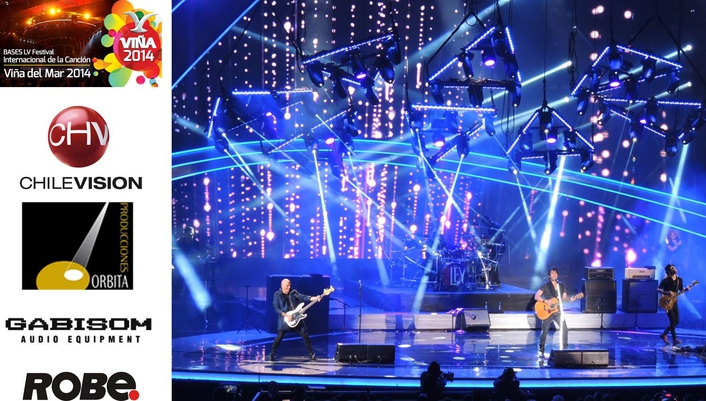 Show La Ley, LD Luis Pastor
The 55th edition of the world famous Viña del Mar International Song Festival in Chile was staged in the city of the same name in the Valparaíso region of Chile, with 48 of Robe’s ROBIN Pointes onstage at the Quinta Vergara’s amphitheatre.

Spanish LD Luis Pastor has been in charge of lighting design at Vina del Mar since 2011 and explains that all the creative processes start at local TV channel Chilevisión, the Festival’s official broadcaster for the last four years. This year, they wanted to emphasise the historic spirit of the festival by recreating the classic original shell shaped structure stage dating back to 1960. 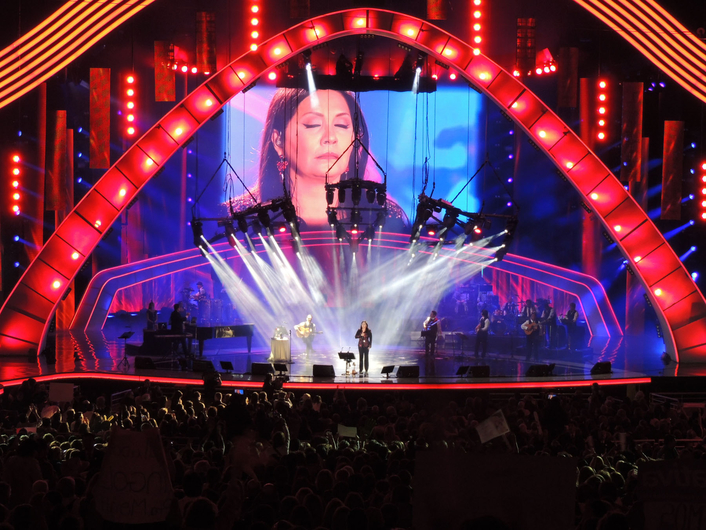 At the centre of the lighting scheme were eight triangular truss pods on vari-speed hoists, each rigged with six Pointes. These were created by Pastor to add more dynamism to the stage, to provide the audience with a different view for each act and also maximise the multi-functionality of the Pointes.

The pods were flown on an automation system and could be moved into various configurations above the 60 metre wide by 25 metre deep stage.

The set - created by Marcelo Rojas of Chilean company Madis - also needed to be appropriately lit.

A total of 50 x Pointes were purchased by Órbita specifically for this year’s festival via Robe’s new Chilean distributor VGL from Santiago.

Alicia Lawner, one of Producciones Órbita’s directors, comments: “Luis Pastor suggested Robe’s Pointe as he had already used them and was hugely impressed”.

Another aesthetic goal was giving each headline band’s LD the headroom to programme their own shows with the available equipment and make it look good for television – so ‘’all bases’ had to be covered.

After that, the effects were added to the triangles - the six Pointes, plus LED wash lights and strobes on each. 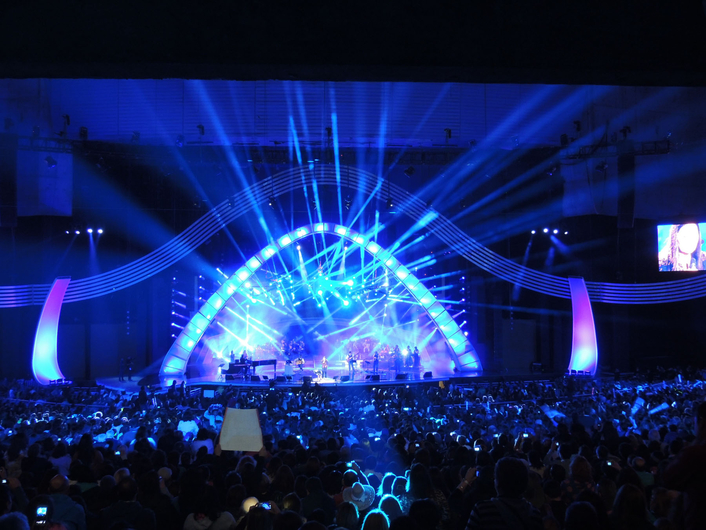 Luis comments: “We worked at 5600K because this was a colour temperature that allowed us to get the full spectrum for the cameras like blue, a little saturated congo blue and the magenta hues. The front lights were warmer - between 5100 and 5300K - so the skin tones looked natural. The beams were at 7000K to create a pure white for effects using the Pointes”.

“The Pointes are very versatile devices – they can be used as beams, spots or washes and also create amazing effects. They have smooth movement, good diffusion, their focus is really good for cameras and they are fast. On top of that, the size and weight are excellent and all the lighting designers were really happy with them.”

During the festival, Robe’s International Customer Support Manager Steve Eastham was present at the Quinta Vergara for any technical support needed, and also provided a training session on the new fixtures for Órbita and Chilevisión’s technicians.

He says, “It was fantastic to be invited to the Festival. Between them Órbita, Chilevisión and VGL produced an amazing series of shows with simultaneous live TV broadcasts. The Pointes on the moving pods cut superb beams across the video screens, creating a huge variety of looks throughout the week.

“It was my privilege to present a seminar to the show technicians, who were very impressed with the Pointe and the Robe brand in general. Furthermore, all the visiting LDs were enthusiastic about the Pointe's flexibility, and look forward to using them in the future”. 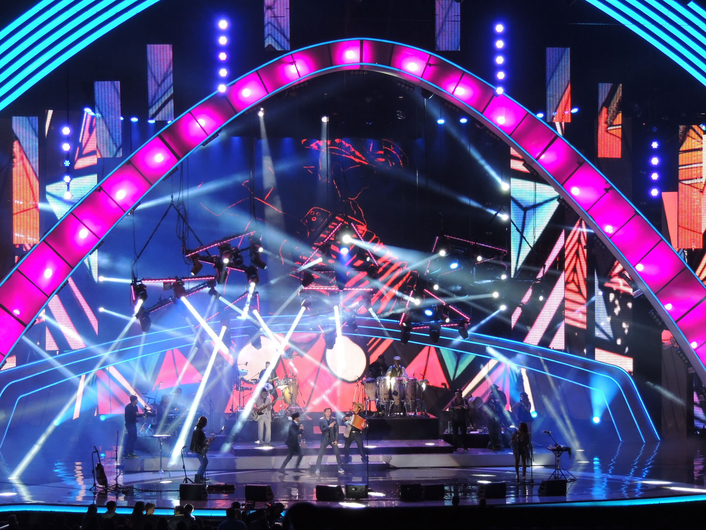 Ricky Martin was the first headline artist onstage and his LD Churry Lafuente was happy with the Pointes: “I loved them! I had already used other Robe devices but this was my first time with the Pointes and I was impressed”.

Francesco De Cave, LD for Italian superstar Laura Pausini, was also delighted with the Pointes: “It has really great effects! I had just three hours to program our show and everything was perfect. The technical staff were wonderful”.

Christopher Penso, LD for Colombian Carlos Vives, reported: “I had never seen a  Pointe before … and I really loved it! It’s one of the best fixtures I have had the chance to use... if not THE best. Its zoom, speed and linear prism are the features I liked best”. 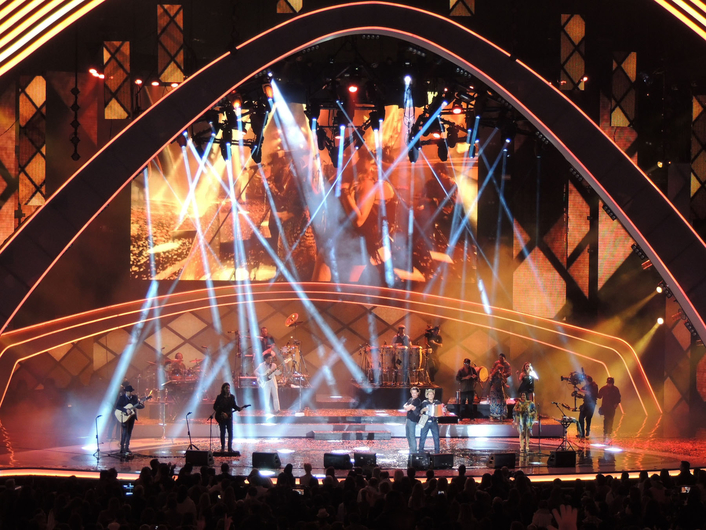 Alicia Lawner stated, “We are very happy with the Pointes’ performance and very grateful for Robe’s support. It was a completely different experience for us from last year’s event”. 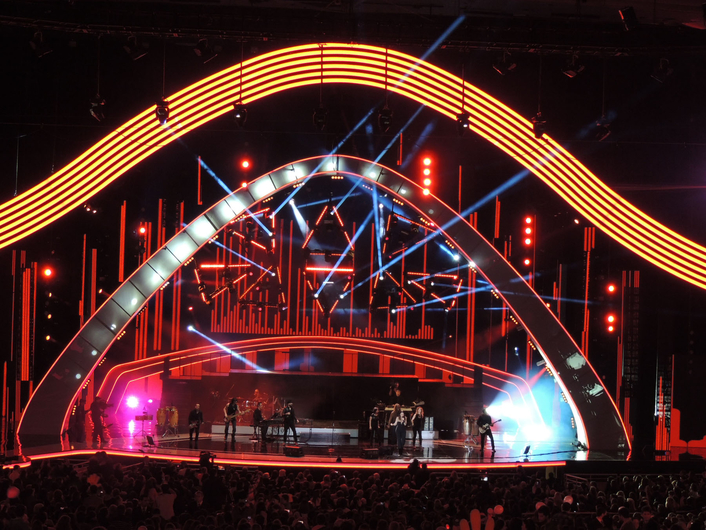 With 25 years of experience, Producciones Órbita is run by three partners Alicia Lawner, Gladys Hervia and Eduardo Alemany. Alemany is a specialist in truss engineering and created and installed the roof trusses used at this year’s Viña del Mar Festival.

Twenty crew from the company worked over six days on the event’s technical set up. The festival was organised and broadcast live each night by TV channel Chilevisión, with audio provided by Brazilian specialist, Gabisom.