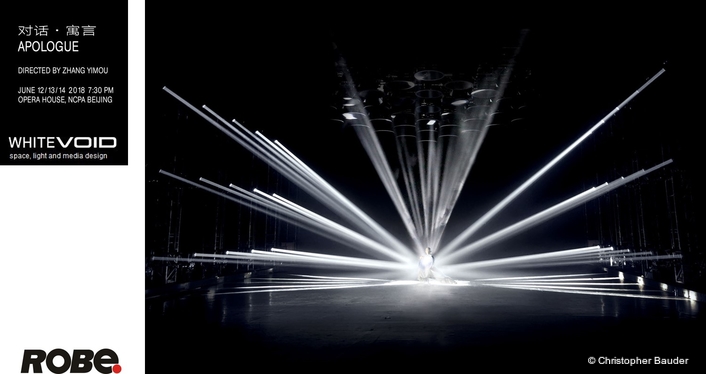 The work was produced by L!VE Kingway at the National Centre for the Performing Arts (NCPA) in Beijing in June and will tour China in August allowing a wider audience to experience how Zhang Yimou breaks the form of traditional stage presentation by blending Chinese folk arts with modern technology, creating a unique performance concept in the process.
For Mirror-Mirror, Christopher utilised 30 x Robe Pointes as his primary lightsources, which worked in unison with 102 x KINETIC LIGHTS WinchLEDpixels and 34 x Mirror Disc lighting fixtures. 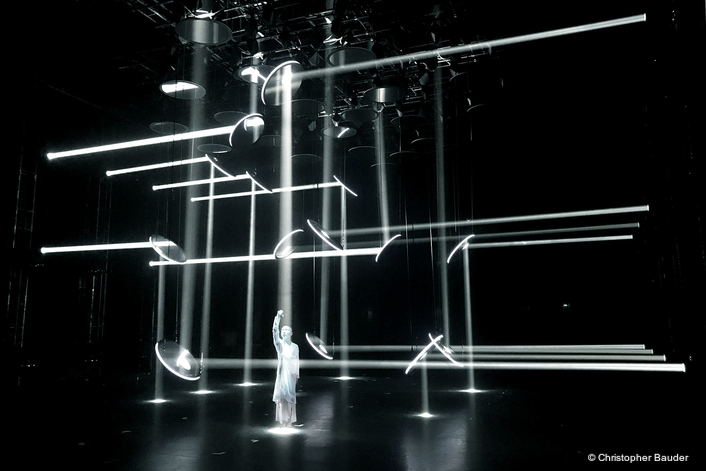 Each mirror is controlled by three winches which give 7 metres of up / down plus pan / tilt, so they can move incredibly smoothly on XY and Z axes making their movement fluid and three dimensional. The mirror movement is controlled via ArtNet by Kinetic Lights’ proprietary KLC software platform and the whole system is networked.
Christopher devised a storyboard for the eight minute piece and completed a previsualisation of the kinetic elements which included moods emotions, feelings, atmospherics … while Zhang Yimou and his team directed the overall show, composed the music, and both of them suggested certain positioning and chorography for the dancer. 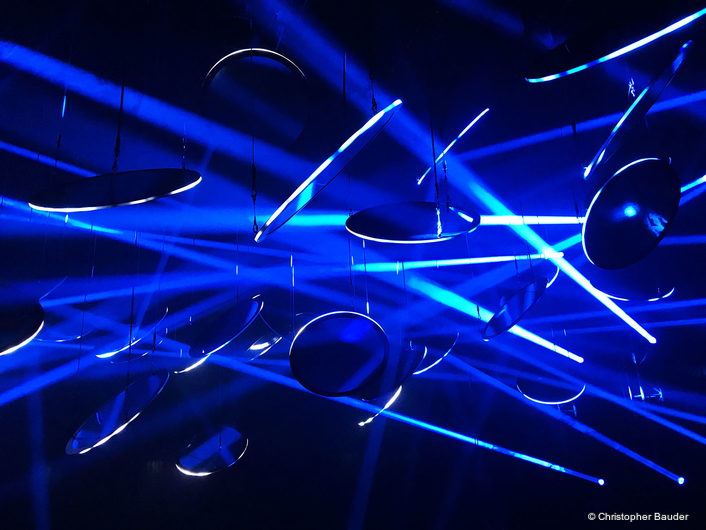 It was an evolutionary process which suited the development of all movement - from the dancer to that of the mirrors and lighting technology.
The Pointes are arranged on ladders in three layers, each with five Pointes, running upstage / downstage. Utilizing these traditional dance performance lifting positions was one thing, but the technique was fully subverted with the mirrors which were able to bend, reflect and refract the light beams in any direction in mid air

Combining the side-rigged Pointes with the moving mirrors massively increased the flexibility of the precisely positioned lighting fixtures.
Christopher first worked with Zhang Yimou on “Weaving Machine” another large scale kinetic installation that was staged as one of the eight sections in Apologue Part 1, presented a year ago in the same venue. This involved 640 internally lit balls on the same winch system and a solo female dancer, Rose Alice from London.

This was very successful, so all eyes were on the second edition of 2047 Apologue. Christopher wanted to retain elements from Part 1… so the fluid, seamless movement of the mirrors via the custom winches were the continuity, and the experimentation came with the moving lights and treatment.
Bending and reflecting the lighting in this way with the mirrors is something he has crafted over a number of installations, notably earlier this year in SKALAR at Kraftwerk in Berlin, a cathedral-like former power station that provided an imposing industrial setting. 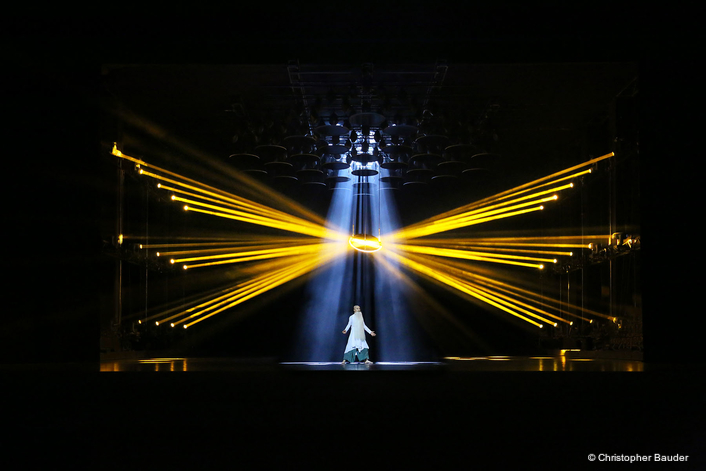 SKALAR was lit with 90 x Robe Pointes in conjunction with 65 x double sided mirrors – each with a perimeter ring of 180 addressable pixels - suspended on 195 of the WinchLEDpixels.
It achieved great critical and popular acclaim, and the Pointe was his first choice of beam light for that. However Christopher knew that there was still a huge amount of more imaginative scope using these adaptable fixtures, so he spec’d them again on Mirror-Mirror for their brightness, precision, intensity and the clarity of the lightsource.

“In addition to the accuracy of the lighting cues we needed a light with highly calibrated colours that matched perfectly. It had to be a quick moving fixture easy to handle and programme … and also readily available. This and the crispness of the emitted light made it perfect for the installation”.

“I really maxed out the Pointes on Mirror-Mirror” he stated, “We could vary the looks infinitely with different gobos, strobing effects, frosts, etc., adding that the biggest challenge at the NCPA had in fact been pumping enough haze into the performance area in three minutes as that was all they had for between segment changeovers.
DMX from the Pointes was converted from ArtNet and integrated into the computer running KINETIC LIGHTS' proprietary KLC software where Christopher and his team programmed the lighting looks and scenes as well as all the mirror movements. 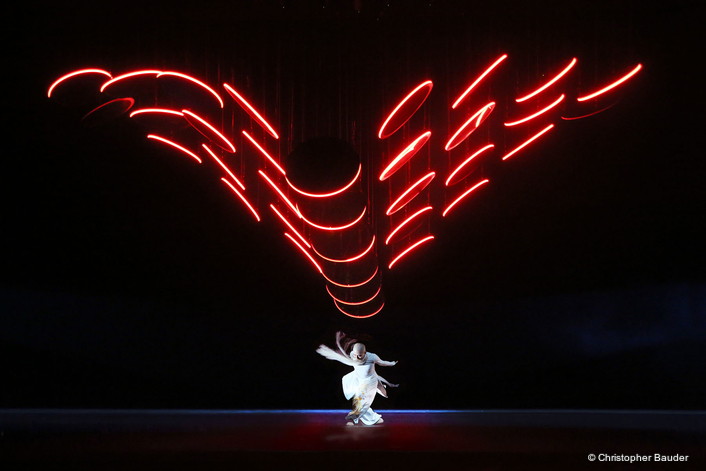 The luminaires were supplied by German rental company MOTION on a dry hire basis and will also be on the tour which visits Tianjin, Xi’an and Nanjing in August.
Christopher really enjoyed working with Zhang Yimou again. Their different creative backgrounds and mix of alternative cultural influences providing a real catalyst for some spectacular visual synergy.

“As a master of performance entertainment and live storytelling, it was a huge privilege to work with Mr. Yimou,” commented Christopher. “As a former cameraman, he knows a lot about lighting and has very specific ideas about colour and texturing … so I took that on-board with my programming of the Pointes and had a complete free rein with the mirrors. It was a very satisfying and educative way to work”.

Yimou is also known for directing the opening and closing ceremonies of the 2008 Beijing Summer Olympic Games, and the Beijing's eight-minute show at the closing ceremony of the Pyeongchang 2018 Winter Olympics. For 2047 Apologue Part 2, his assistant director is Lulu He. 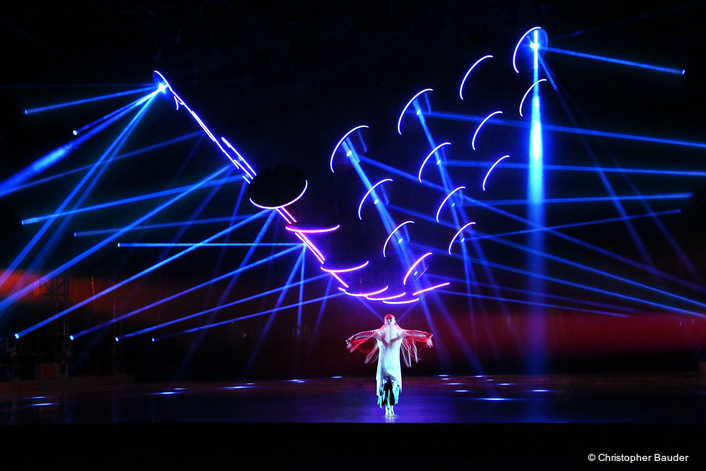