Robe iPointes for “My Light Shines On” in Edinburgh 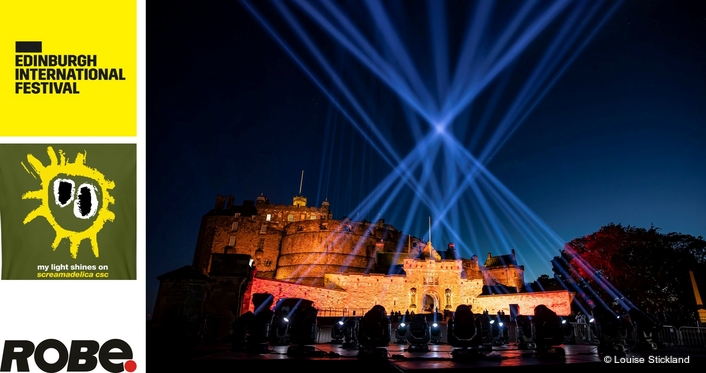 Two hundred and seventeen Robe iPointes were selected by the artists as core components to “My Light Shines On”.

“My Light Shines On” was a stunning large-scale light art installation designed by Kate Bonney and Simon Hayes from Lightworks, commissioned by the world’s leading performing arts festival, Edinburgh International Festival, to mark what would have been the opening weekend of Edinburgh’s 2020 Festival Season. Celebrating the spirit, energy, vibe and imagination of the Festival – with a multi-disciplinary programme and was cancelled for the first time in seven decades due to the coronavirus pandemic – fourteen separate lighting installations around the city highlighted some of the most famous venues of Edinburgh’s festivals in August.

Lighting designers Kate Bonney and Simon Hayes were inspired by the tradition of ghost lights, a single light that is always left illuminated in theatres. It is a symbol that, though the stage is empty for now, the building will be filled with laughter, tears and applause once again. 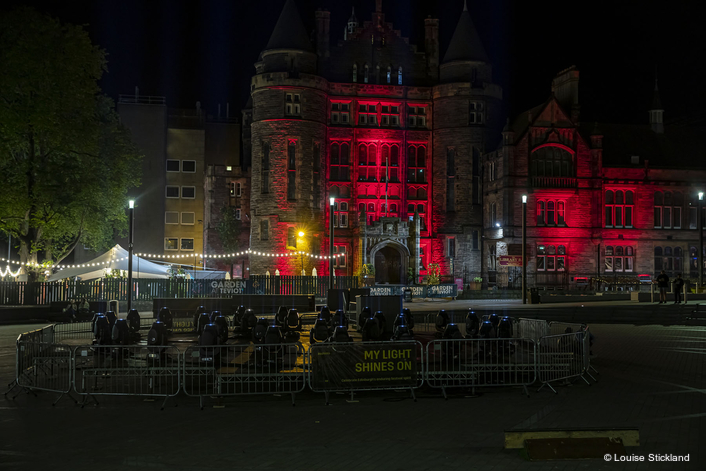 These four, plus three other beacons – on the top of the Festival Theatre (35 x iPointes arranged in two rows), 9 x iPointes on the Queen’s Hall and another collection of moving lights on the Usher Hall – were the seven largest and most visible elements of My Light Shines On.

The full work also included lighting of stage doors with festoons and collections of ‘ghost lights’ running in theatre foyers with around 284 LED fixtures deployed.

Fourteen sites that normally would be buzzing with activity and creativity … were celebrated in this uplifting visual masterpiece. 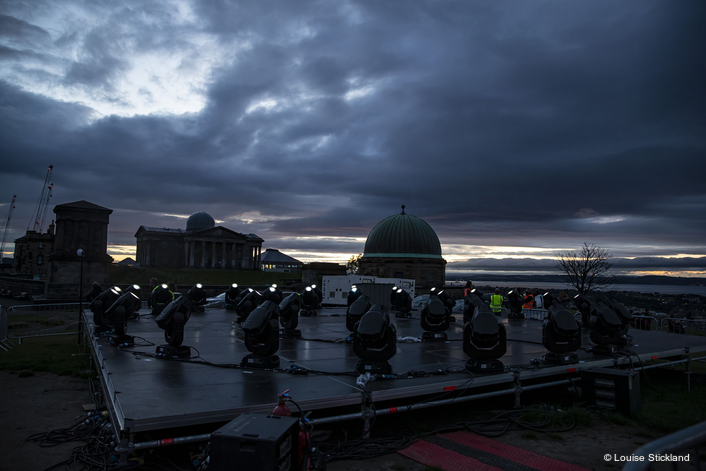 Coordinating amassing and displaying all the lighting equipment was Edinburgh International Festival’s head of lighting Dan Quayle, working closely with Calder Sibbald and James Gow of Edinburgh-based rental company Black Light, while John Robb, the International Festival’s head of technical oversaw the whole operation including planning, logistics and crew, ensuring that everything was delivered to the full Covid-19 compliance requirements.

Edinburgh International Festival approached Edinburgh-based Simon and Kate – who have worked together as Lightworks since 2013 – with a list of sites that they wanted to include in the design.

“Their basic brief was that the design had to have impact and also represent each of the city’s different August festivals in addition to being an exciting city-wide spectacle of light,” explained Kate. 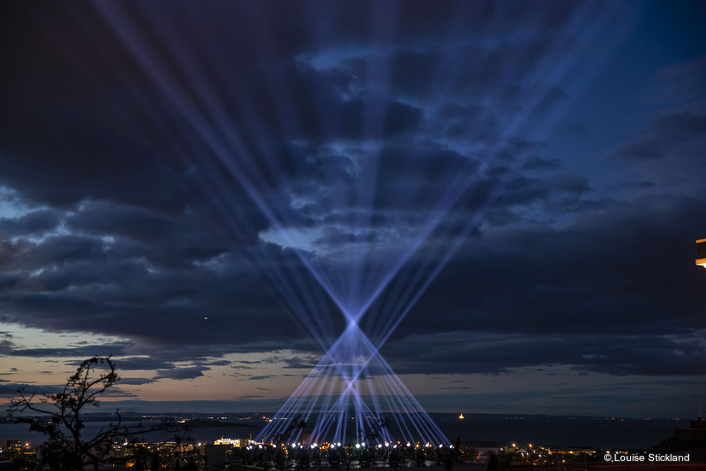 “Capturing the mood of the moment was a delicate and demanding task. It was essentially a celebration, but at a very sensitive time … and a time when live entertainment is one of the sectors that is completely halted by the pandemic.”

“Plotting the lighting choreography for the beacons was also a challenge,” elucidated Simon. “[We are] looking forward to a time when live performances and the Festival will return to engage, entertain end enthral audiences.”

This further evolved into multiple phrases and phases of choreography with a lively effervescence in “both a structured, precise way with messy spontaneity”, ending up as 10 minutes of beautifully fluid geometric streams of movement based on light beams – from fans to helixes, curves, triangles – all programmed by Neil McDowell Smith. 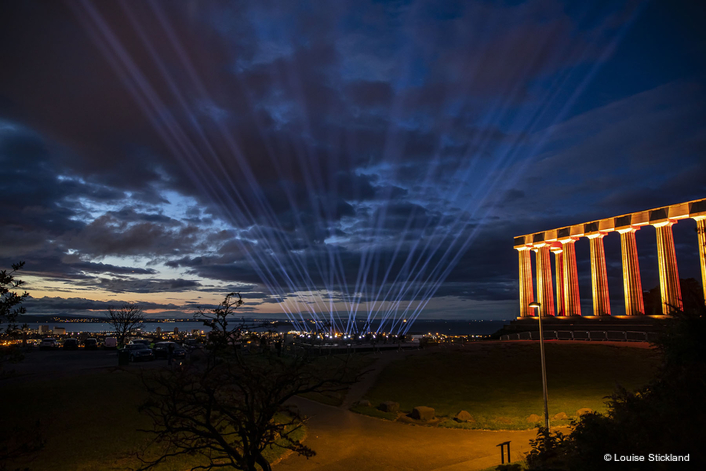 At the shootout – coordinated by Calder Sibbald and Callum Howie (from Edinburgh International Festival) – with Dan stuck in lockdown in New Zealand at this stage – the iPointes were chosen as one of two moving light options for their brightness and availability, together with the Robe reputation for reliability which underlined everyone’s confidence.

Simon and Kate needed a properly waterproof fixture as any sort of weather dome was out of the questions for aesthetics.

It was the first time that Lightworks – known for Pitlochry’s award-winning Enchanted Forest visual design among other diverse works – has worked with the Robe iPointe, but they were suitably impressed with the intensity and the quality of the beams.

It was definitely a winning choice to provide the “riot of movement” they wanted to energise the city over the weekend. 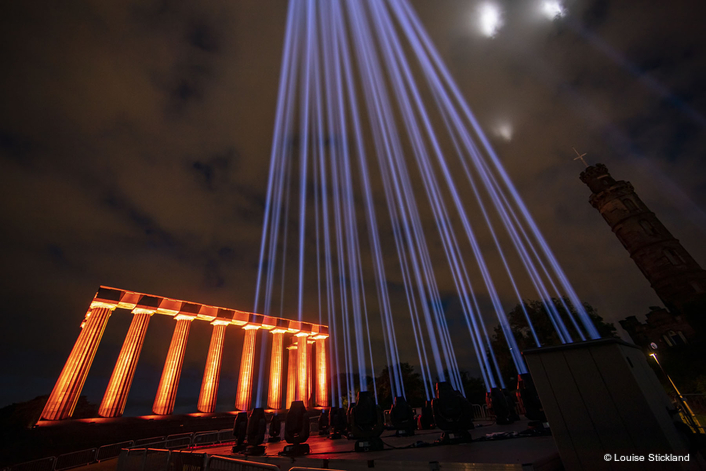 In addition to Edinburgh Castle’s 36 x beacon iPointes, another 17 fixtures were ensconced on the castle battlements, run via a wireless DMX connection sent to a receiver at the base stage below on the Esplanade. The WIFI at Calton Hill was also provided from the Castle’s wired internet connection as there was a direct line-of-sight between the city’s two high points.

The beacon lights were programmed and run on grandMA consoles – with 9 dotted around the sites, all independently running to the same timecoded showfile. All the sites had internet access and were networked, so any updates from ‘base’ control at the Castle could be sent to all control consoles simultaneously, which was very time efficient and enabled updates to be sent to all sites from anywhere via Neil's laptop or phone. 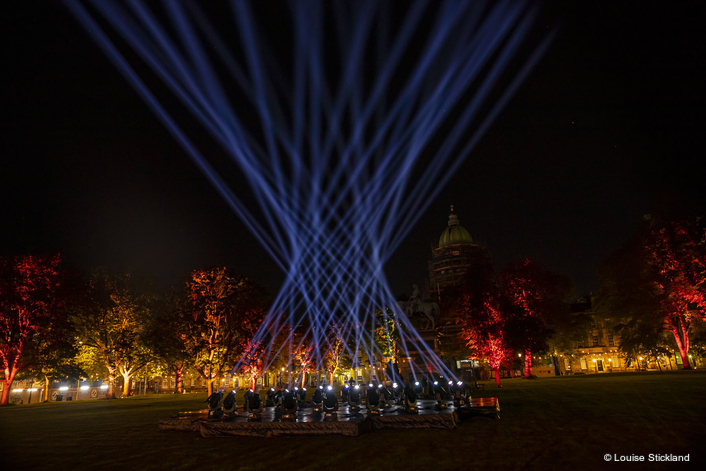 be sent to all sites from anywhere via Neil's laptop or phone.

The get-in for all sites started on 28th July to be ready for a 6th August rehearsal night, with three teams doing the installations and one prepping team led by Dan’s deputy, John Campbell.

There were numerous challenges!

High on the list was accessing the roofs of the Edinburgh Festival Theatre, Usher Hall, and the Queen's Hall, all galvanising spaces to reach and rig lights in exactly the right places!

However, by far the most logistically galvanising aspect of the project was ensuring all the Covid-19 relevant safety regulations were met which included social distancing and crews working and being allocated in bubbles and, within these, in pairs or ‘cohorts’ for the closer proximity work. 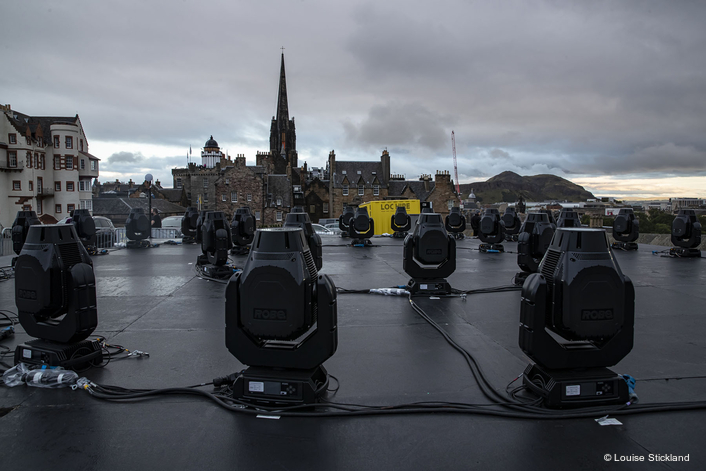 Dan’s core team of 12 were joined by 10 casuals, all freelancers from local theatres like the Kings, Festival & Lyceum all working in cohorts.

Drivers to get all the kit from the International Festival’s central warehouse to each site worked as an extension of the prep team bubble, and flight cases all had to be fully cleaned and sanitised before they could be touched by the next bubble.

“Normally festival planning would start ramping up in May and around mid-June the designers get involved”, explained John Robb, “but My Light Shines On was pulled together in just four weeks.”

In addition to the 265 moving lights used for the “My Light Shines On” beacons, another 480 generic and LED luminaires were used across all the sites to highlight some related monuments and structures and environmental detail like the trees in Charlotte Square. Additional architectural lighting was provided for the National Monument of Scotland on Calton Hill and the Castle had its standard permanent installation enhanced along with that of the other venues. 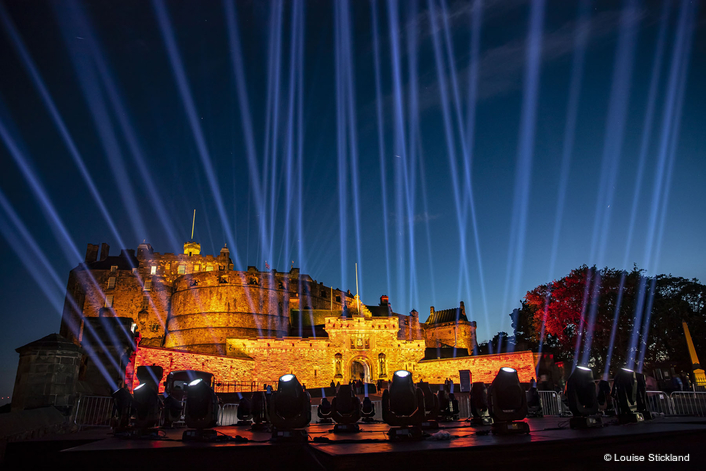 My Light Shines on was a huge success. It energised people across the city and around the world, and while Edinburgh was not thronging with people like a normal Festival opening weekend, there were still a host of visitors and locals enjoying the installations live and on social media.

It also gave a great morale boost to the various crews lucky enough to be involved. “We were all delighted to be back working,” stated John Robb, echoing sentiments that you’ll hear all around the industry right now, whenever there is some activity and the chance for the hugely talented and resourceful freelance community to do what they love.

Several local companies worked on the project including Black Light and Direct Control who dealt with all the power and distro. Black Light also collaborated with Hawthorn, one of the main Edinburgh International Festival and Edinburgh Festival Fringe suppliers.

My Light Shines On – the lyrics are from Primal Scream’s ‘Movin on Up’ – also illustrated great creativity and poignance in how the medium of light can be used to signify hope and positivity on the horizon.

Edinburgh International Festival launched My Light Shines On: A Celebration of the Festival City, a specially commissioned film, on Saturday 8th August as well as their digital programme comprising newly commissioned work from all five Scottish national companies Scottish independent artists. The programme can be found on the International Festival’s YouTube or at www.eif.co.uk.

The full Edinburgh International Festival announcement can be found here

My Light Shines On
Robe