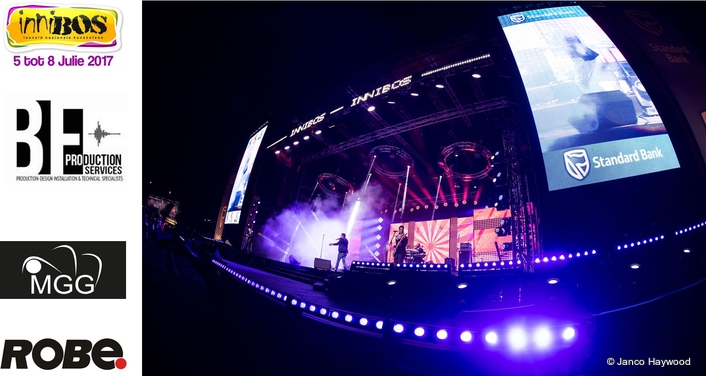 Robe moving lights were the primary lightsources on the Main Stage at Innibos 2017, a high profile arts and music festival staged in and around Mbombela (Nelspruit) in South Africa presenting Afrikaans music, theatre, literature and visual arts. The fixtures were part of a striking visual design by Johan Ferreira of BF Production Services. Johan has lit the event’s main stage for 12 years now - changing his approach dramatically in terms of technology over that time.

The organisers have upped the production values in the last couple of years, and as last year’s set design was particularly successful, Johan decided to replicate its most popular elements for 2017, adding some new and fresh touches. Having taken some time and an amount of experimentation to evolve a design that had worked so well for all the main stage action throughout the 5-day event … the next step was to develop from that point he explained.

Flexibility was the key with the design. They might have a 70-piece choir or orchestra onstage one minute … and a solo artist the next; the genres range from rock to pop to classical and many in-between, so his start-point is always to have an environment that can complement all possibilities.

This space also has to be able to facilitate seamless transitions between performers, assisted by a rolling riser system with two drum kits, etc. a process co-ordinated by a crew from Main Stage technical production supplier MGG Productions.

While the stage might not have appeared to change so much on the last couple of years, there has been a more noticeable shift from previous years in the roof and upstage - looking at the lighting and video design!

Johan starts the Innibos design process as soon as he is confirmed for the next year’s project. In January a major production brainstorming session takes place involving him, the organisers, the stage and musical directors and the sound designer ... in the peace and headspace of a game farm outside Pretoria. After that he works on a final visual design. 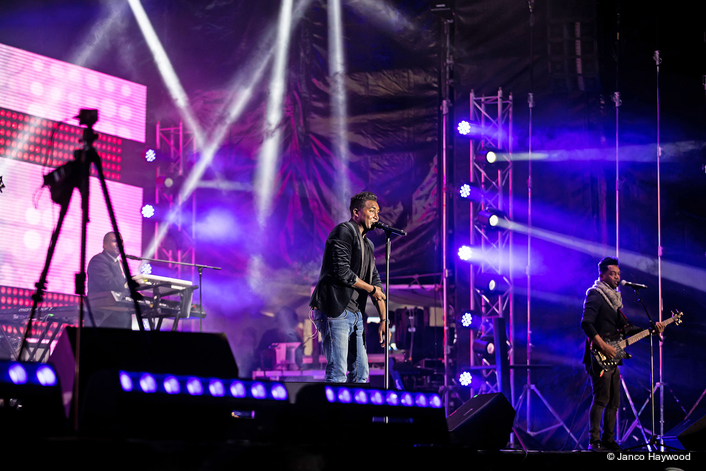 This year there were 151 Robes on the rig, all supplied by Johannesburg-based MGG Productions, delivering full technical production and crew for the Main Stage for the third year.

These fixtures were hung on a series of trusses in the roof including three 4-metre diameter circles hung mid-stage, all staggered in heights from upstage to downstage.

Twelve Robe Spiider wash beams were on the upstage truss; 24 x Spikies were on six side totems (vertical truss towers) together with 30 x LEDBeam 100s; 24 x LEDWash 1200s and 27 x LEDWash 600s were rigged on the circles and the FOH truss and used for general washing; 12 x Squares were positioned on two back truss totems … and 22 x CycFX 8s were in the footlights position around the front of the stage thrust.

Lighting was designed to work harmoniously with the video design which comprised two 12 mm portrait format side screens, each 8 metres high and 4 wide, utilised mainly for IMAG camera feeds.

Added to that, onstage were two stacks of 5 mm screen upstage at the sides - concealing the drum kits - which were alternated with LED panels for contrast. Upstage 66 panels of 5 mm screen were divided into three pillars with both horizontal and vertical runs of LED panels in between, breaking up the geometry.

Playback content for the side and back video surfaces was produced by Prifactor from Pretoria and MGG Productions. 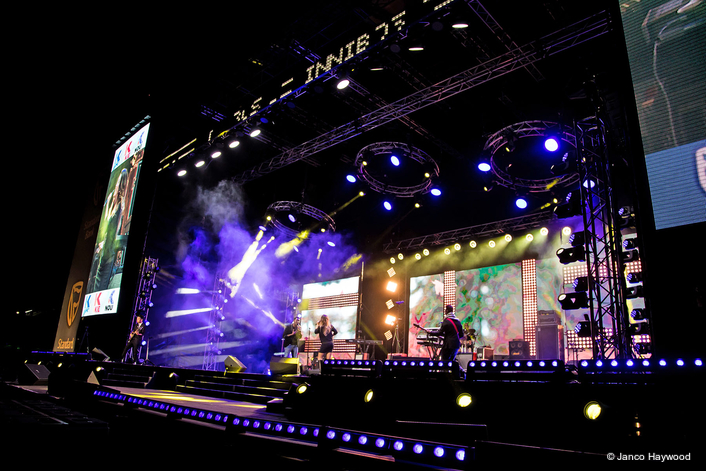 The LEDWash 600s and 1200s were used for the bold and colourful base stage washes, for specials and for the main FOH lighting – both versions have been a favourite of Johan’s for many years and he reckons they still “outperform” every other wash light on the market, from the subtle pastel hues to the popping bright saturates, the concentrated pools of colour to the wide washes, “nothing compares to these units” he states.

The little LEDBeam 100 he loves for its small size and big punch and the fact it can be squeezed in virtually anywhere. He used them on Innibos for piercing side cross-stage shooters and for creating large aerial looks across the stage and out into the audience.

The Squares were utilised upstage close to the LED walls on the two back totems, with six fixtures on each. He loves their “sheer brightness” and the fact they can be relentless crowd blinders one moment … and gentler eye-candy the next.

The CycFX 8s worked for both audience effects and footlights. As footlights, they were an important part of the design which had to light a large ensemble cast on some evenings, with no other options to execute a full width front look except from the thrust position. “Having the pan on this fixture is invaluable as I can use them for multiple functions”.

Spiiders he feels is a “major” leap forward in LED wash and beam technology. He thinks the fixture clearly shows Robe is listening to lighting designers and their needs. “Robe first impressed me – versatility wise – with the Pointe which is still a favourite tool” he explained, “and now with the Spiider they have an LED ‘wash’ that is so much more than just a wash!”

He’s not seen the intense brightness of the Spiider in any other LED fixture of its size and complexity before. The huge and ultra-smooth zoom travels from an enormous wash to a tight beam and then there is the central LED with its incredible eye-popping flower effect. ”That’s why I love this fixture,” Johan declares. “More really is MORE with this fixture”. 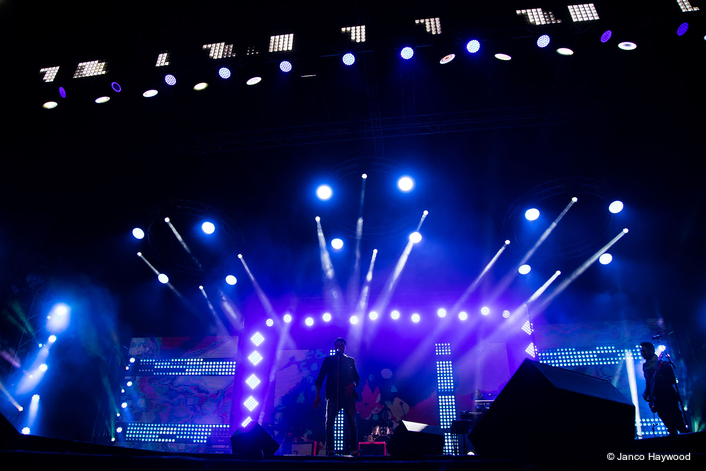 He also enjoyed the Spikies, “impressed” as ever with the punch from such a compact little fixture, and a position that stays “accurate and on-point even after some totally crazy pan-and-tilt moves”. In quantities, he observes, these give designers great beam-effects and pixel mapping possibilities.

The challenges of lighting five days and evenings of Main Stage entertainment at Innibos include dealing with the range and versatility of music in a festival style atmosphere. The only rehearsals are for the Saturday evening performance. “There’s a great creative team on-board at Innibos … and that’s what makes it rock”. 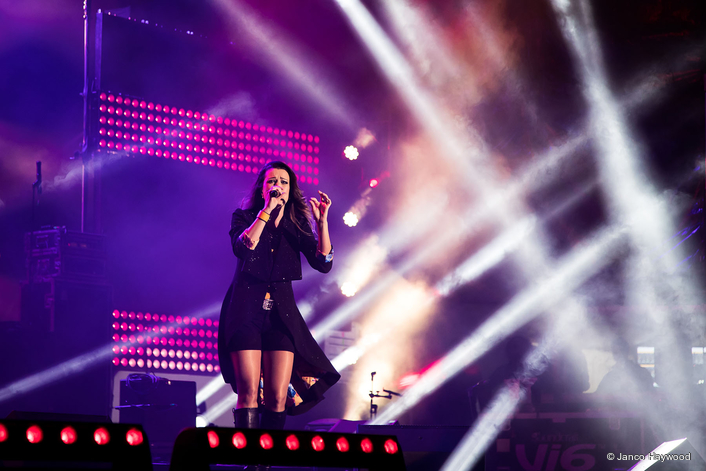 Robe is his number one moving light choice for all his designs, confirms Johan. At Innibos, they also deal with extreme weather conditions from exceptionally hot days to very cool nights, lots of moisture and dust, so it’s an environment where the sturdy build quality of Robe “really proves itself”.

In addition to that, he’s infinitely excited with Robe’s work in the LED field and thinks it’s a brand “fully focused on designer’s needs” that produces “versatile, bright and well-constructed products”.

He used a grandMA2 full size for control at Innibos 2017, undertaking all the programming and running of shows himself. 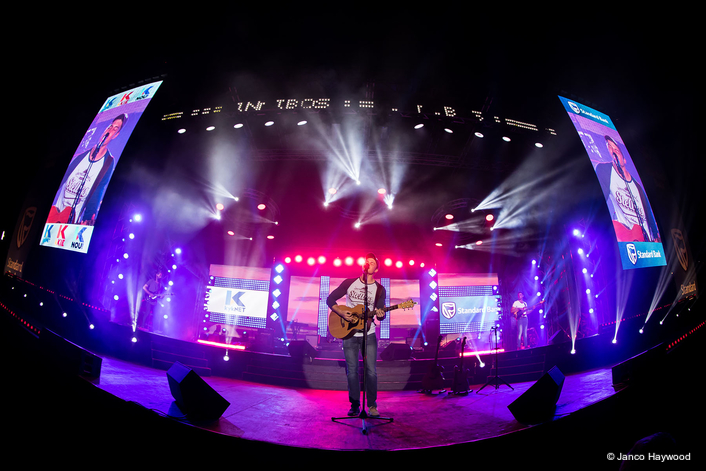