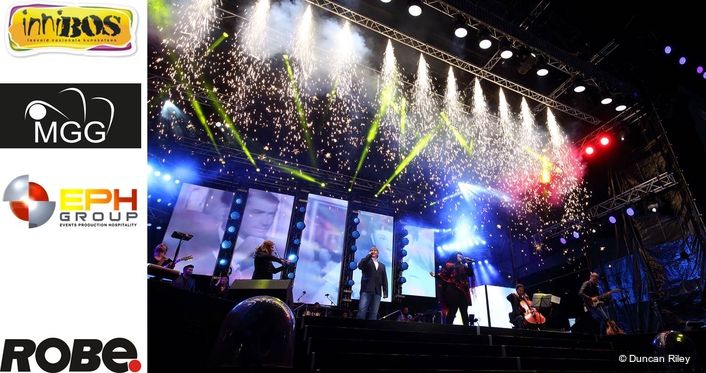 Innibos – an action-packed high profile arts and music festival staged in and around Mbombela (Nelspruit) in South Africa during the winter presenting Afrikaans music, theatre, literature and visual arts – again featured Robe moving lights on the Main and the Rock performance stages in 2016.

These were just two of seven live stages, all fully scheduled with all types of entertainment for the family-friendly 5 day extravaganza of imagination and fun … that culminated in a free Sunday Gospel show on the Main Stage.

The event united hundreds of artists, musicians and actors from multiple genres showcasing their talents and works, who were lit with around 170 Robe fixtures among other lights. The event was attended by over 109,000 people who also enjoyed a lively proliferation of arts, craft and food-stalls along with other cultural and brain-stimulating activities like poetry reading and a ‘book crawl’.

Johan Ferreira, who also runs his own production company, has been involved with Innibos since 2005 (it started in 2004) at that time designing one of the smaller stages. He has also been using Robe products in his work for some time.

In 2006, he was asked to light the Main Stage ... and he’s been designing and technical directing an eclectic line up appearing on it ever since!

The Main Stage production design process – which also includes set and video - typically starts around 10 months in advance, and Johan will look at all aspects of the technical stage presentation working  in close conjunction with FOH engineer Murray Lubbe.

As Main Stage technical directors, the pair are an integral part of the wider festival creative team.

Johan’s creative starting point for lighting the 2016 event was to shift it away from a ‘conventional’ music festival set up with bands and artists appearing in quick succession – conveyer belt style - instead, he wanted to establish a theme that could carry on with a bit more depth and visual interest through all days of the event, and work equally well for the different musical genres.

His theatrical roots also come into their own, and he looks at the Saturday night showcase and a peak point and the line up going on throughout the event, then creates a stage and set that will work all these demanding scenarios - the grand opening on the Wednesday; Thursday night’s all-out rock show; the Friday night variety performance … and of course, the large Gospel production that closes the festival on Sunday.

The primary requirement is to be flexible and extremely dynamic.

This has driven him to specify Robe moving lights for some years … steadily in increasing numbers! This year some 150 Robe fixtures were on the rig, including LEDWash 600s and 1200s, BMFL Blades, LEDBeam 100s and CitySkape 48s … together with other lights.

The 24 x LEDWash 1200s were scattered around on the overhead trusses and used for vibrant stage washes. The ones on the front truss were used for band key lighting, and worked in unison with 28 x LEDWash 600s which were also distributed on the over-stage trusses as well as along the top of the PA wings for shooting into the audience and pulling them into the action. 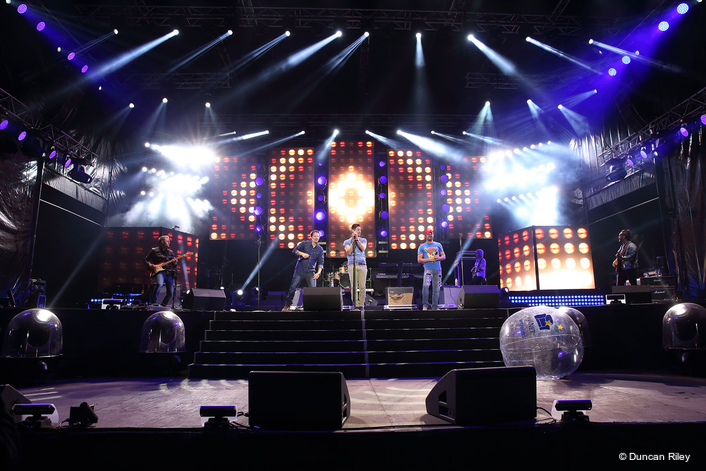 The six BMFL Blades were upstage. They gave huge backlight effects on artists and bands and were used to produce complex and stunning gobo looks.

The 48 x LEDBeam 100s were divided into two banks of 24, each suspended on three upstage trusses and Johan’s idea was to create an array of beams that would resemble the look of stadium lights and enlarge the perception of space.

The 44 x CitySkape 48s were used as footlights and basic washes for artists strutting up and down the thrust stage.

LEDWashes have long been a favourite fixture of Johan’s and he loves “the output, the beam spread and colour mixing / correction”. He says he’s always surprised by the “incredible brightness” and he can use them as a full stage wash one minute or a tight special the next ... an adaptability essential to his theatrical style approach to lighting an environment like this.

“The colour mixing is incredible” from the deepest saturates to the most delicate pastels” he declares and he loves being able to use them to create eye and camera-candy with the individual ring control.

He’s also equally enthusiastic about the BMFL Blades… ‘It’s by far one of the best profile luminaires in our industry today, packing a massive punch!”

On this show, it was vital to have a unit with enough impact to produce mid-air effects in spite of a huge mega-bright upstage LED screen and he was delighted with the speed and accuracy of the BMFL beam-shaper, the colour system and the “beautiful but practical” set of gobos.

The little LEDBeam 100 is also a favourite fixture “and will be for the foreseeable future”, being small enough to place anywhere onstage or around the rig, but powerful enough to produce highly visible beams. “Using LEDBeam 100s rigged in an array-style gives almost endless possibilities”. 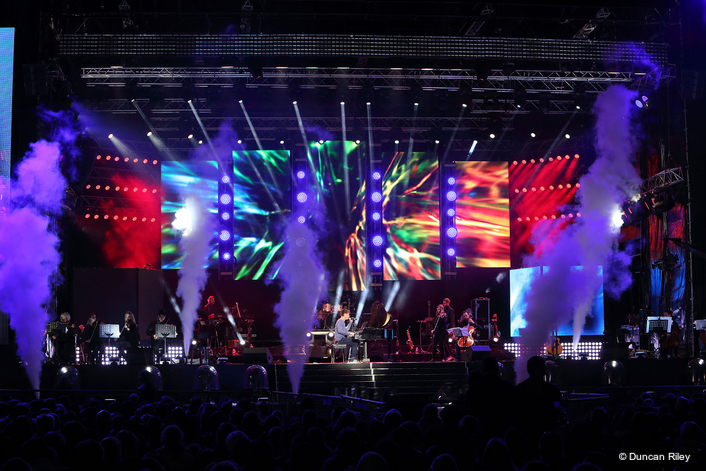 The biggest challenge of lighting the Main Stage this year was illuminating the 28.8 metres wide by 4.8 metres deep thrust section into the audience, as he didn’t have the luxury of any lighting towers in the public area on which filler lights could be rigged to assist. As it was, the CitySkape 48s worked very well.

The other challenge was the sheer amount of content in the show … each night there are over 50 numbers to keep looking new, fresh and invigorating, and that’s a lot of intense programming to ensure a WOW factor for each song!

Commenting on Robe generally, Johan thinks they are currently “one of the best” lighting manufacturers. “Care is taken with every fixture. They are robust and can take the strain of an outdoor environment like Innibos” he expands, saying that he enjoys the fact that “Robe pushes boundaries with every new fixture and takes the time to listen to LDs when it comes to the design of new products”.

He can’t wait to get his hands on the new Spikies and hopes to include it on the plot for Innibos 2017.

He loves many things about being involved with Innibos including the family atmosphere and the fact there is a fantastically fluid creative and collaborative chemistry between everyone when it comes to producing the event. “There is really an endless horizon of fabulous and inventive ideas,” he concludes.

The Rock Stage is also popular – as you might expect – particularly with diehard rock fans and among the younger elements of the festival population and Pretoria based rental company EPH productions has been involved as an equipment supplier to that stage for several years.

However it was Levan’s first year as LD, having joined the company in late 2015, which he thought was a very special opportunity. 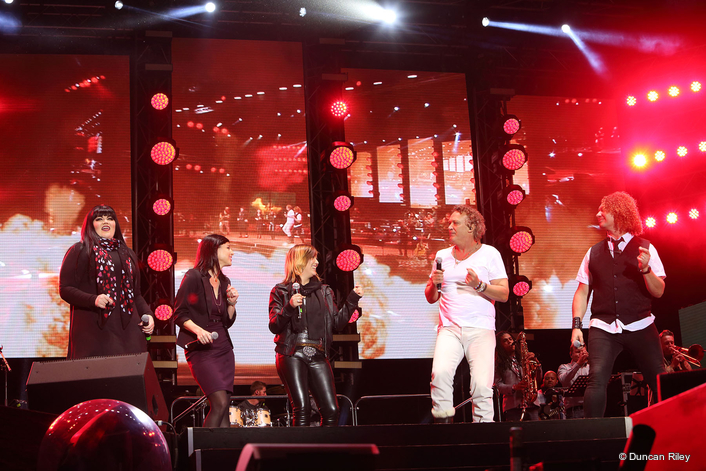 Naturally he designed a completely new lighting scheme and this had Robe Pointes, LEDBeam 100s and 1000s right at the heart. “I wanted the lighting to be a new and unforgettable experience for the audience and artists – something that they’d never seen before,” he stated.

The eight LEDBeam 1000s were located upstage in the roof, with three Pointes at each end along the sides and the remaining six Pointes on the deck. The LEDBeam 100s were positioned along the top front of the roof structure for audience effects.

Levan loves the “Incredible zoom and powerful fat light-source” of the LEDBeam 1000s. On the LEDBeam 100s he likes the piercing narrow beams and the macro effects and on the Pointes he likes just about everything including prisms, gobos, zoom and the spot and beam effects.

Talking generally, he thinks the optics “are great” on all Robe products, and that the brand represents great value for money.