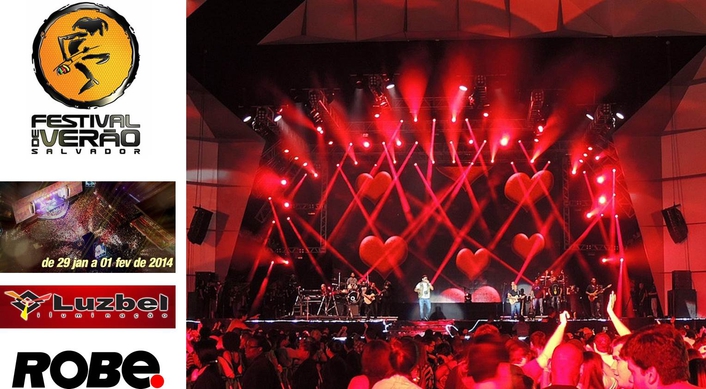 In 2015 the Festival de Verão will run from January 21st to 24th
Almost 100 Robe moving lights were utilised by rental company Luzbel Iluminação for the Main Stage of the 16th Festival de Verão (Summer Festival) in Salvador, the capital of Bahia, Brazil.

The event pulled in more than 120,000 people over four days and Robe was the only moving light brand featured on this stage in a stunning production lighting design by Junior Luzbel, who heads the locally based company with his brother Ricardo Luzbel and his partner Ricardo Gordilho.

The design process took about two weeks, during which Junior consulted with his crew and technicians and also to make sure he could satisfy all the artists’ riders and create a plot that would fit most of their requirements. 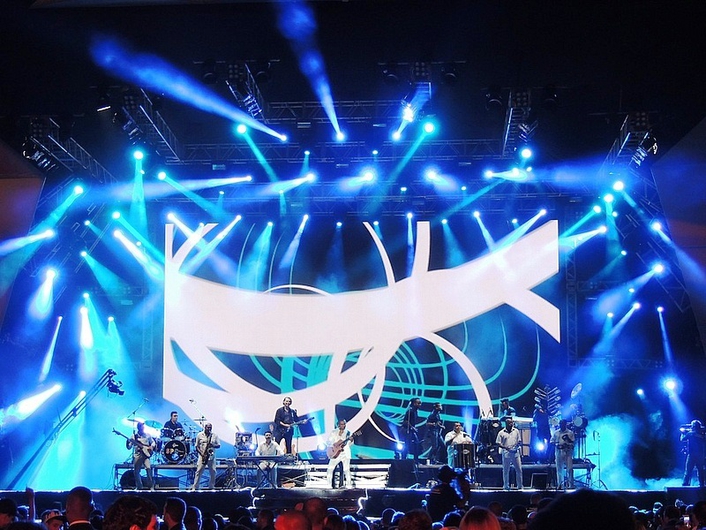 The stage had various dimensions - the main performance space was about 20 metres wide with 26 metre catwalks each side and a 19 metres long front runway extended into the audience.

Most of the Robe devices were rigged on three huge U-shaped trusses above the stage, and six diagonal trusses - three per side - and two E-shaped structures each side of the upstage LED screen.

Several LEDWashes were positioned at FOH to illuminate the scenic façade surrounding the stage for the photographers when singers or dancers were strutting along the front catwalk.

Junior - also the LD for well-known artist Ivete Sangalo - comments: “The Pointes were a big innovation this year together with the fact that we replaced fresnels for LEDWashes as the ‘photography’ lights. This wonderful LED device by Robe worked perfectly”.

The colour temperature used for photography and video was 5600 K, chosen together with Multishow, the TV channel that broadcast the event live and exclusively every night.

Junior was impressed by the Pointe and its multi-functionality: “You can use it as spot, then turn it into a wash, a beam... I really love these features!” he said.

On the LEDWash, he comments: “It’s great! Really bright! You can use it for a million applications - like photography, lighting the band, the stage in general – everything! These are the best quality LED wash fixtures on the market, and for me, the MMX Spot is the best Spot currently available!”

Gaffer Paulo Lebrão looked after all the photography needs together with Junior programming and operating the 12 x LEDWashes at FOH, while technicians Viny of MA Lighting and Adriel of Luzbel co-ordinated the 3D visualization suite on site where all the band designers could pre-program their shows in advance. 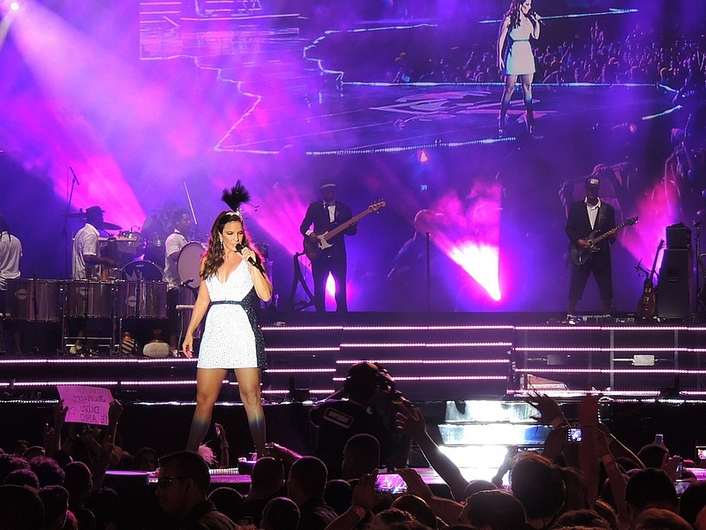 Technician Carlos Umbelino from Sao Paulo based rental company Apple was there to give support for the Pointes and freelance technician Emerson, also from Sao Paulo,  tech’d the LEDWashes and followspots at FOH. In total the lighting team comprised 13 people working before, during and after the festival.

Lighting control was from MA Lighting, with support from their specialist Paulo Lebrão.

Two grandMA light consoles and a grandMA ultra-light were networked at FOH and there was also an MA onPC command wing and a grandMA2 light in the 3D studio for programming.

The Set Designer was Giuseppe Mazzoni from GMF Arquitetos. 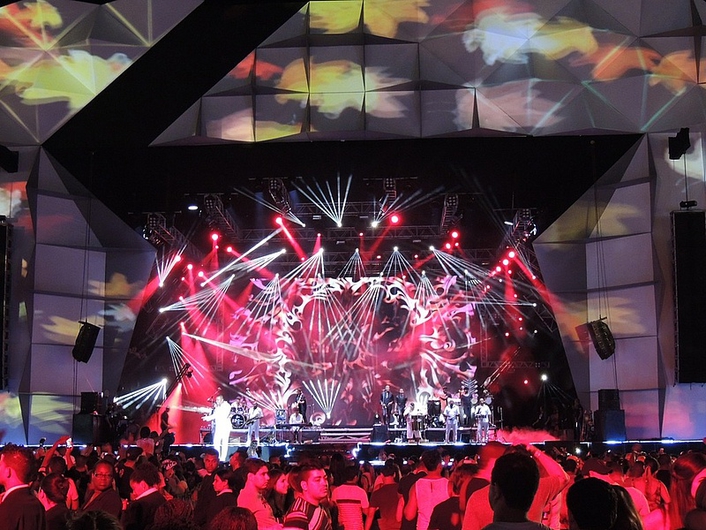 The experience of participating LDs
Over the four festival days, many lighting designers and operators talked positively about the performance of the Robe fixtures, especially the Pointe and the MMX Spot.

Many of them had already used MMX Spots on last year’s event, but the new sensation this year was the Pointe!

As Ivete Sangalo’s LD, Junior Luzbel said, “We are on a new tour now where I use beams to make accents, so for this festival show I tried a mix of using the Pointes to create accents sometimes and at other times to create a base wash or to project on the floor. I tried to work with the units in all the possible ways and it worked really well”.

André dos Santos, Gusttavo Lima’s LD, has used Robe products before and this time he highlighted the prisms, effects and the precision of the Pointe’s beam as his favourite features. “The Pointe is amazing!” he stated.

On the other hand, Lucas Piauilino, Claudia Leitte’s LD for the last two and a half years, worked on the set-up together with the Luzbel team and had even had the chance to test the Pointe at ELO Iluminação’s showroom in Sao Paulo, “I loved it immediately!” he enthused.

“Here with Claudia I used the Pointes as beams, but I had already used them as spots, washes, for effects and everything else before. The Pointe and the MMX Spot are always on my specification list. I love the fast movement and colours, and if I could … I would use them in all of my shows!”

Ivan Souza, Timbalada’s LD, also became a Pointe fan: “I used Robe moving lights here  last year and also on another recent show in Belém do Pará. They are excellent! The colours, prisms, gobos and the speed of the Pointe have no match. I have also used the LEDBeam 100 which is incredibly precise!” 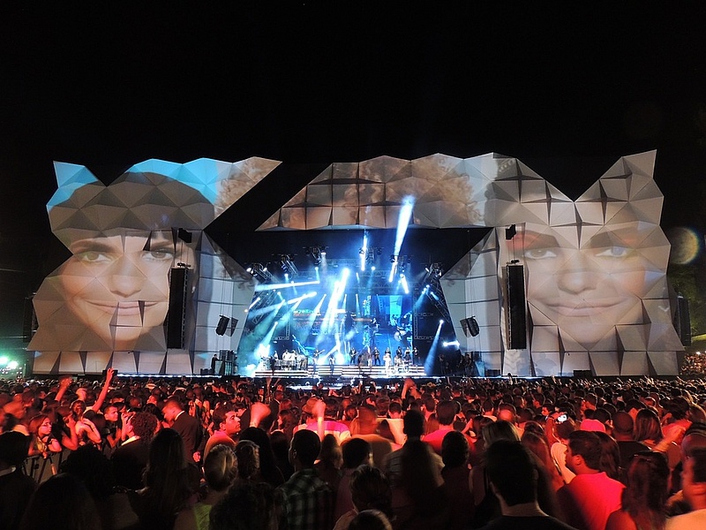 Psirico’s LD, Ricardo Santarosa, has just changed all his rider to specify Robe from now on. “The Pointe’s focus is perfect!” he says, also commenting that having a 3D Studio at the festival enabled him to programme his show four days ahead of time in a relaxed air-conditioned  environment! “Luzbel’s staff are amazing, and it’s been a wonderful experience!”

North American artist Ne-Yo was one of the international artists playing, who came to Brazil with his LD of four years, Daunte Kenner.

Daunte commented, “When I arrived I thought it was going to be just another festival, but it’s far better organized than many we’ve played in South America. I really appreciated the hard working and helpful video and lighting crews, especially the MA 3D studio that allowed me to be able to work before the actual show. This made my day more relaxed”. 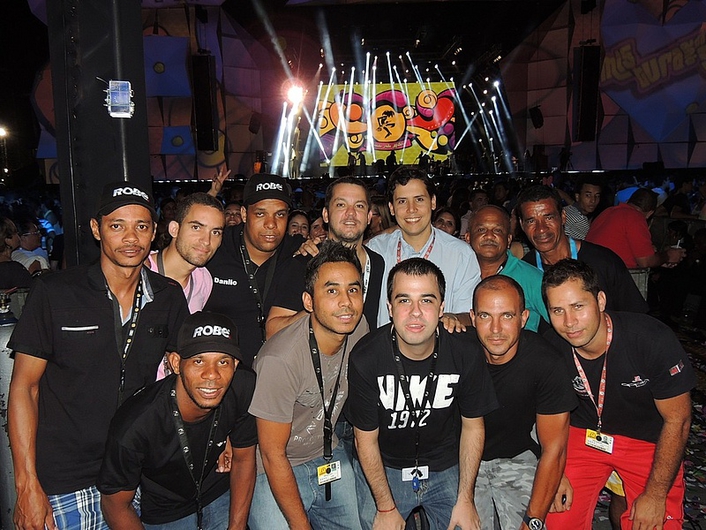 He’s worked with Robe products in the past but this all-Robe set-up has changed his mind about several preconceptions. “I was impressed by the fixtures’ output even when using saturated colours. The LEDWashes look great on camera and the Pointe’s speed is amazing … I didn’t expect it to be that fast!” he concludes.

In 2015 the Festival de Verão will run from January 21st to 24th and may be staged at the recently opened Fonte Nova Arena in the same city.

Robe Moves With the Rhyth...tival de Salvador, Brazil
Robe is Out There With Paul McCartney in Brazil
David Guetta Rocks Brazil with Robe