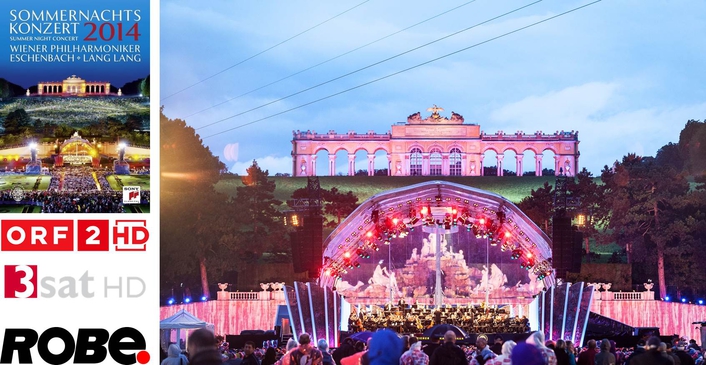 Some of the LEDWash 600s were mounted on the barriers and used to illuminate the front elements of the audience
Robe moving lights – 174 in total - were specified by lighting designer Helmut Krammer for the 2014 Summer Night Concert, performed for its eleventh year by the Vienna Philharmonic Orchestra in Schönbrunn Palace, Vienna which provided a sumptuous and beautiful Baroque backdrop to the event.

The venue is a UNESCO World Heritage site and this high profile annual cultural experience was broadcast live by national TV station ORF1 and also beamed around the world on via various satellite channels. It was also live on radio.

Various Robe fixtures were used to light four key areas in the extensive and beautiful gardens - the main stage; the flower beds left and right of this, the Neptunbrunnen Fountains at the back of the stage and the Gloriette structure which is at the top of the hill directly behind the stage location. 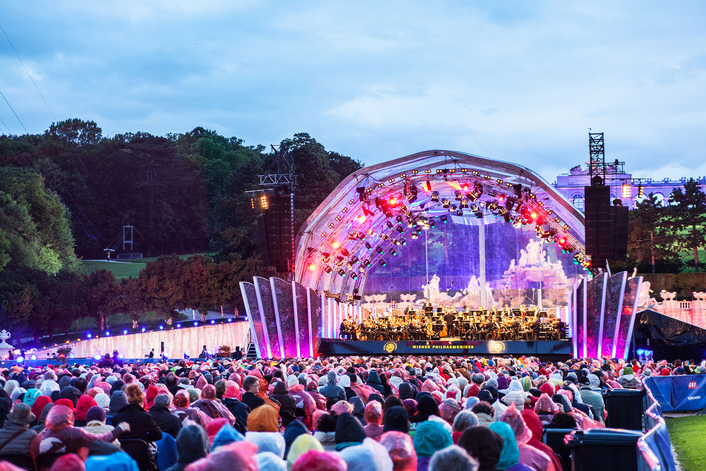 It was the fifth year that Vienna based Krammer has designed lighting for the Summer Night Concert, which was enjoyed by an estimated 40,000 classical music fans who were treated to a very special evening … in spite of the unsettled weather!

Krammer has been using Robe products regularly in over the last six years and chose Robe again following the great results achieved over the last three years at Schönbrunn.

Krammer drew on his skills and knowledge of lighting architecture as well as TV and live shows to produce all the visual magic needed to bring the gardens alive for the show, together with the orchestra who performed works by Richard Straus, Hector Berloiz, Franz Liszt and Johannes Strauss. They were conducted by Christoph Eschenbach and featured Lang Lang as the piano soloist who brought plenty of sparkle to the mix with a brilliant performance of the Burlesque for Piano and Orchestra by Richard Strauss.

Some of the LEDWash 600s were mounted on the barriers and used to illuminate the front elements of the audience.

The LEDWashes 300s were rigged on the trussing above the stage together with the ColorSpot 1200E ATs which were used as specials to reinforce the wash lighting.

The LEDWash 1200s were located around the perimeter of the fountains to light up the water, and also used to wash the Gloriette structure in the far background with colour and ambience. More LEDWash 1200s coloured the large flower beds flanking the stage with a series of shades, hues and bold, dramatic shafts of light and were especially useful for the wide camera shots which swept in and out showing the full scale and extent of the impressive event space.

The LEDBeam 100s were placed around the perimeter of the fountain on a small hill at the back of the stage and used to create a candle-like effect that added lots of dynamics to the lighting backdrop. 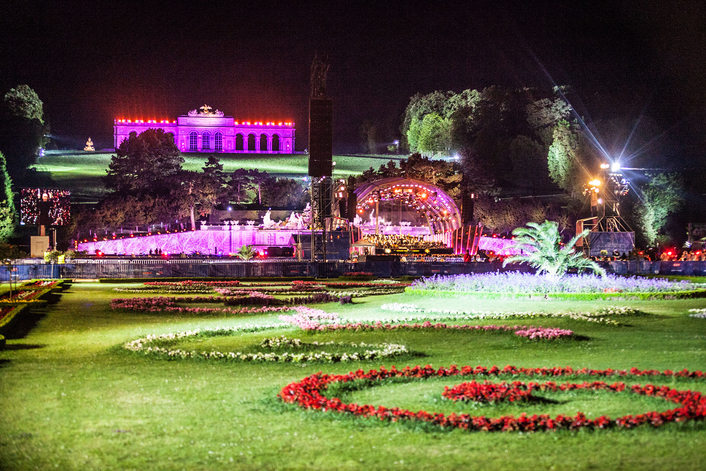 Lighting the Summer Night Concert is more about creating a total environment and an ambience for the event rather than highlighting the orchestra as the centre of attention, and lighting plays a vital role in achieving this overall aesthetic goal.

Krammer continues to spec Robe products for the excellent output and reliability, and the LEDWash series in particular is a favourite.