The Recipe for Everything You Want, Need

To Serve Man,” Twilight Zone, 1962, Cayuga Productions
“The Kanamit seem friendly and assure everyone they have nothing to be afraid of. In fact, they offer to share wonderful technology that will provide limitless energy, cure all disease and convert deserts into lush gardens. For the people of Earth, paradise has arrived.”

I recently read that Gertrude Weaver, of Arkansas, celebrated her 116th birthday, behind 116-year-old Misao Okawa, of Japan. She’s also the 11th oldest person of all time.

Think of the changes they’ve seen.

I have tough time thinking about the technological changes that have taken place in the past 20 years.

Can’t even imagine what things will be like six years from now through 2020.

But if you believe the futurists – and I sorta’, kinda’ do – it’s going to be freakin’ awesome!!

Everyone will be hollering at, bragging to everyone else with social media.

Things will all be connected to/talking to things that will take care of stuff for us and solve problems we didn’t know we had. We won’t have to lift a finger because things will deliver stuff to us even before we know we want/need them.

Jeezz, it’ll be cool!
Everyone wants more for their kids than they had to make it better for them; and we’re delivering at a mind-boggling pace.

Even before Al Gore invented it the Internet to connect a few spots across the U.S. to help scientists and engineers collaborate. 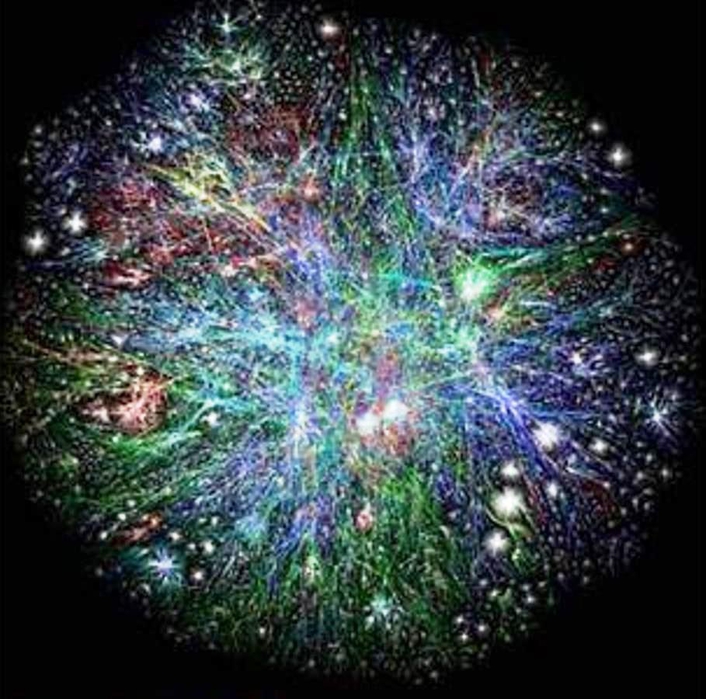 Today, the Internet is a global system that connects networks, systems, devices, things and people. An idea originally funded by the U.S. government, it got out of hand when it was set free and  now it’s indispensible in exchanging ideas, information, stuff between people, organizations and things.

Totally Connected
Today, you have to really hunt to find a location that isn’t connected on the planet.

The narrator summed it up, “Or more simply stated, the evolution of man.”

Then we got the Web, followed very quickly by Social Media that has allowed us to constantly connect with friends, relatives and even “Like” things.

We just can’t get enough of our social media. 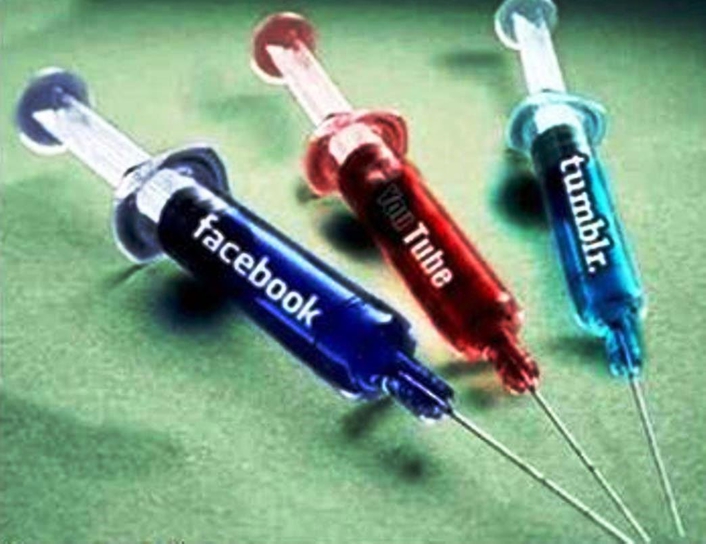 Addiction – Initiated as an innocent idea, social media was an online solution for people to connect with people. That much power is strangely addictive for some people who can’t get enough, do enough, say enough. Its okay, but some would give up personal contact and intimacy to be in the virtual world.

Listen Up
We love sharing our conquests and achievements with others so they know how awesome, right, smart we really are.

And if folks retweet it or comment on the Web about it so others can hear about it, it’s even more gratifying because … well, because.

Alright, you can show your brilliance by lashing out at them, putting them down or belittling them with razor sharp statements.

Throw in a few well-chosen words and you show everyone your extensive vocabulary. 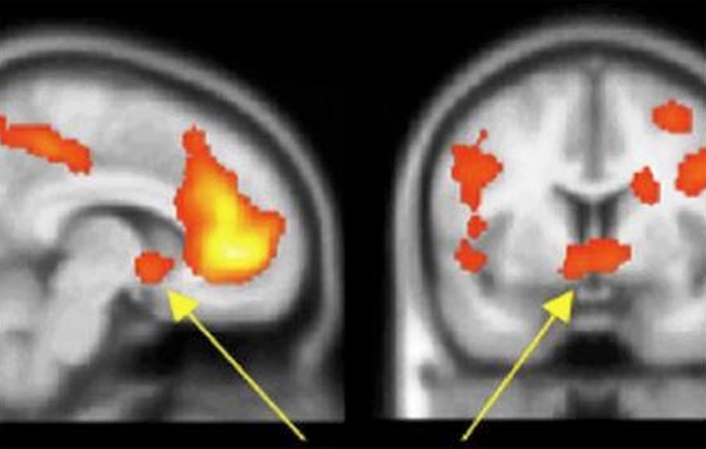 MRI Effects – Psychologists and researchers have found that social media actions/interactions can heighten mental pleasure, anger and fear in individuals who are “overly active on line.” MRI scans show areas of the brain that become more satisfied and more enraged by online encounters/challenges.

What you do, say, who/what you connect with is so important to the world that social sites spend tons of money to study your online ideas/activities. That way, they can serve you up to companies/people who want to communicate with you and become a part of your inner circle, your life. 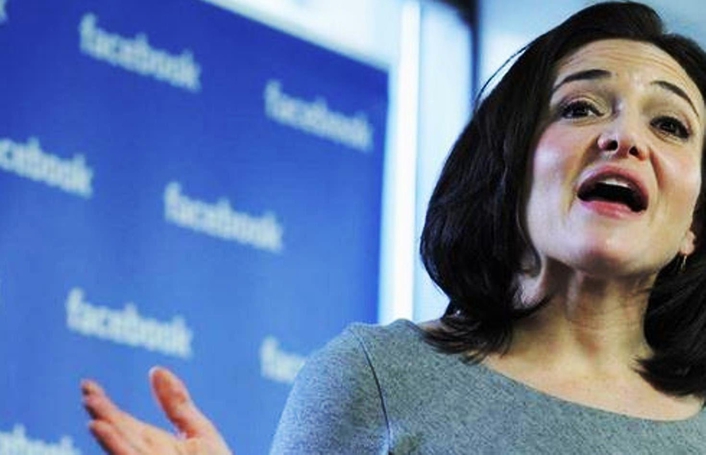 Mea Culpa – Facebook’s second in command, Sheryl Sandberg, apologized recently for a research program carried out with some users without their knowledge. Privacy advocates were outraged and other sites were relieved a wider net wasn’t cast.

The more they know about you, the better their analytics work to figure out what lights your fire and the better it is going to be for everyone because the world really does evolve around you.

Michael Chambers noted, “If it's twelve o'clock noon, that's what you preoccupy yourself with.”

They recognize it, they get it. 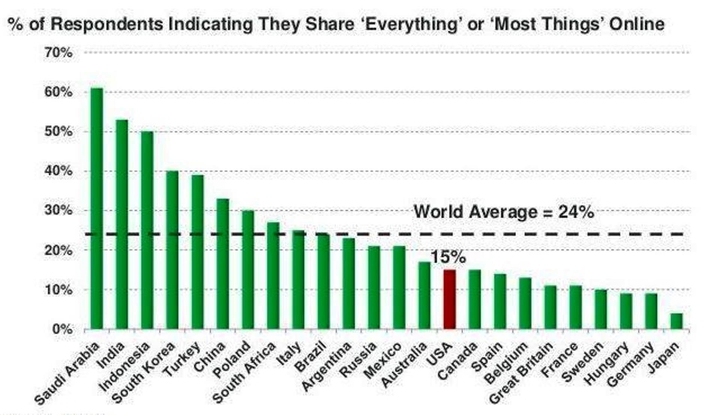 Sharing – More and more people use social media as a way to express themselves and share (sometimes more than they should). At the same time, privacy advocates say that tapping into, studying, analyzing and using that information is an invasion of an individual’s privacy. It’s a tough line to walk when people lay it all out there and then are upset when someone looks, pays attention.

Of course, none of this would be possible without the fantastic advances in computing technology.

Power Curve
According to KPCB’s Mary Meeker, every advance in integration produces a 10X increase in the installed base of computing technology.

Back in the ‘60s, there were roughly one million mainframe computers that had roughly the power of the iPhone you have in your hand.

We made advances of 10M minicomputers in the ‘80s, 100M PCs and today, more than 10B mobile devices.

How sweet it is and how rosy tomorrow looks.

We have technology and apps that are changing things right before our eyes in what/how we define work, relaxation, transportation, education, health and government.

You don’t simply carry your device/connection with you today, you’re starting to wear it and some are planning on getting it implanted. 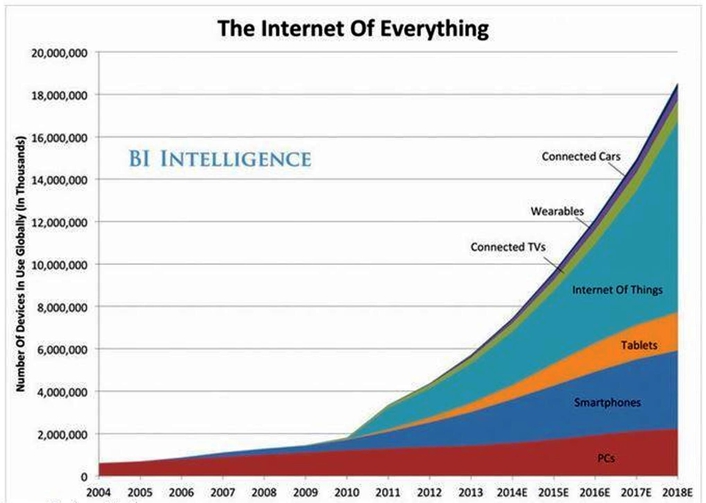 Connected Everything – Whether you call it the Internet of Things (IoT) or Internet of Everything (IoE), Cisco and firms around the globe are bidding for their piece of the action – their connections, their service, their use of the information to make people’s life easier, better, happier, healthier, more productive, more rewarding. Utopia can’t be far behind.

Robots scurry through the factory; the military is flying drones overhead and is toying with an Iron Man suit or better yet, battlefield robot; and 60 percent of today’s car cost is technology with a goal of delivering a driverless auto that can safely deliver you … somewhere.

Sensors let trucks talk to trucks and to boxes that also talk with your refrigerator that makes a list when you need more milk and tells the kids they need to drink three glasses a day. 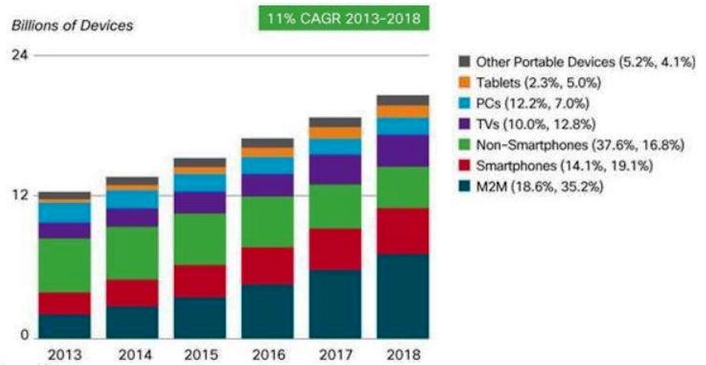 Devices, Data – Forecasting that in the not too distant future there will be more than 50 B things connected and exchanging information, Cisco, Ericsson and many other players feel it will be their devices, their infrastructure solutions that provide delivery. The growth will produce bigger Big Data, more information-rich content and demand for analytics to make sense of and deliver a strategic advantage for companies and organizations of all sizes.

All of these things are in place and communicating just to make life better, easier, more enjoyable so you can connect more, communicate more on your lifeline … social media.

Changing
And the transformation is only coming faster, getting better.

Some of the things really smart people tell us we can take advantage of, enjoy by 2020 include:
-        Virtual reality vacations – why go, just be there
-        Implantable chips that monitor everything and tell something what needs to be done to help you drop 10 lbs., give you the right medicine, keep you on a healthy diet, let healthcare systems (who needs a Dr.?) handle stuff
-        Video entertainment, monitoring, surveillance anywhere, anytime
-        Drones everywhere monitoring weather, crops, traffic, them (no not you, them); delivering stuff you want/need even before you know you want/need it

Michael Chambers looked at the list and said, “Sooner or later we'll, all of us, be on the menu.”

There’s probably a lot more that you and I can’t even imagine that will be developed, offered to us with visions of huge benefits and be snapped up by guys/gals faster than Google Glasses.

I have no desire to stick around as Gertrude and Misao have for 116 years because I can’t imagine the changes they’ve seen and sure as heck don’t look back and say, “Jeezz, didn’t see that coming.”

Nope, I want to drive my car to work, to the grocery store to shop for junk food; fly to vacation spots on planes with real pilots; make my own mistakes and learn from ‘em,  talk to my spouse, kids, friends, associates face-to-face, on the smartphone; stumble through life and relish it on my own terms.

I know what you’re saying, the technology roadmap can deliver something for all humankind. 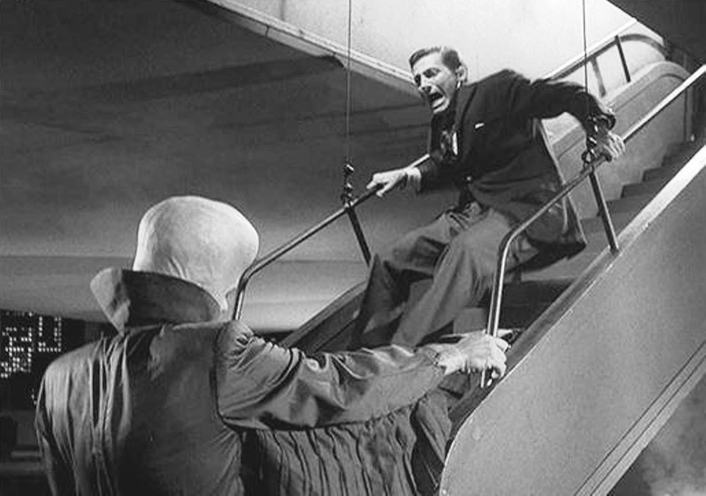 Somehow, I have this gnawing concern that some of the promises of technology will make Patty scream, “Mr. Chambers! Don't get on that ship! The rest of the book, "To Serve Man", it's - it's a cookbook!”

Dad always said when something sounds too good to be true … it usually is.

Social Media Numbers Don’t Matter, People Do
The CES of Everything
Internet of “Things” ...yground for Bad Guys/Gals