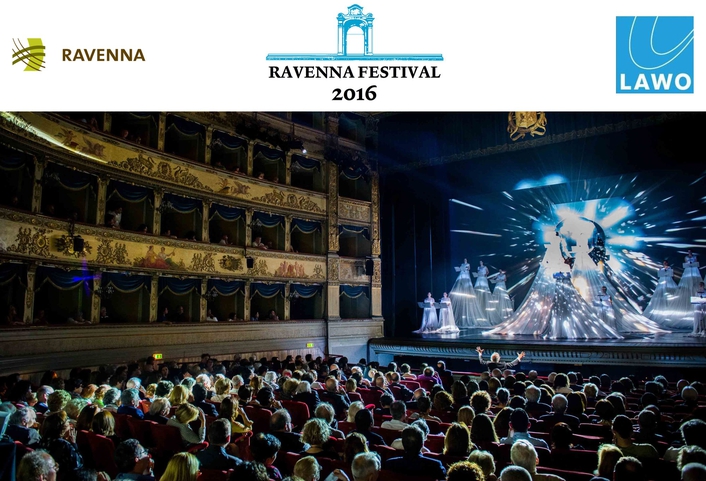 Staged across the Italian city that bears its name, the Ravenna Festival ranks high among Europe’s most prestigious events. Adding another edge to its character, the 2016 event relied heavily on the use of RAVENNA IP networking for its audio operation.

The Ravenna Festival hosts performing arts in venues including the Pala de Andrè indoor sports arena and Dante Alighieri theater – where a Lawo mc²36 mixing console, Compact I/O Stagebox and RAVENNA formed the heart of a powerful and flexible network.

BH Audio – providing sound reinforcement rental and recording facilities for classical and contemporary music – is the longstanding audio service provider for the festival. For 2016, Mediacare Audiovisuals also came onboard. “The connection between BH Audio and Mediacare is me,’ says BH Audio partner Massimo Carli. “I’m one of the five founders of BH audio and the founder of MediaCare Audiovisual. 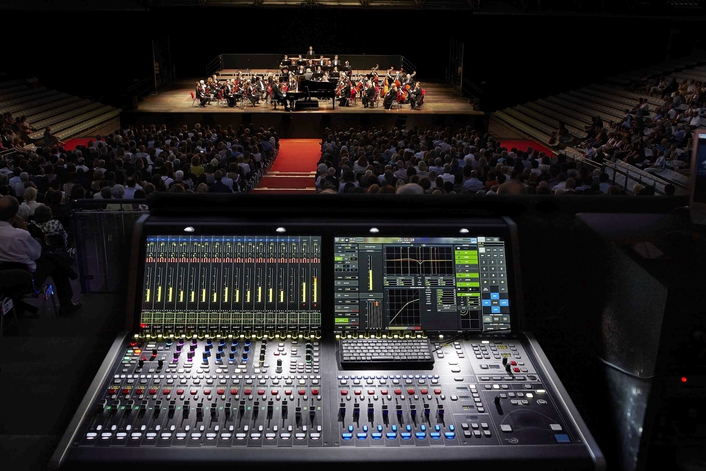 “Two years ago, MediaCare undertook an installation project for the sound in the Teatro Dante Alighieri where I identified Lawo’s mc²36 as the perfect console for the theater’s needs,” he continues. “Then at ProLight & Sound in Frankfurt I spoke to the Lawo team about BH Audio, and suggested using a Lawo system at the festival and at Riccardo Muti’s Academy courses, as well as for the final show at the festival, staged at the Dante Alighieri theater.”

The choice also triggered the use of RAVENNA networking technology for the first time when Carli contacted Lawo’s Italian distributor, Aret Engineering. “The use of RAVENNA was not so complicated,” Carli says. “I needed just one Compact I/O interface and Cat-6 cabling for the RAVENNA link. The great thing was being able to have 128 inputs and 128 outputs on a single Cat-6 cable.”

Aret Engineering and demonstrator/trainer Massimiliano Salin carried out the initial setup, and then held an intensive two-day training course at the venue, after which Carli was able to carry out all the work at the Pala de Andrè and the Academy without any problems.  “After using more or less the same set-up for the past three years at the venue, the first thing that struck me was the sound,” says Carli. “We’d used a top-grade analogue desk in the past, so the comparison wasn’t between products of a different level, and we hadn’t changed PA or microphones, but we immediately noticed the difference in timbre. 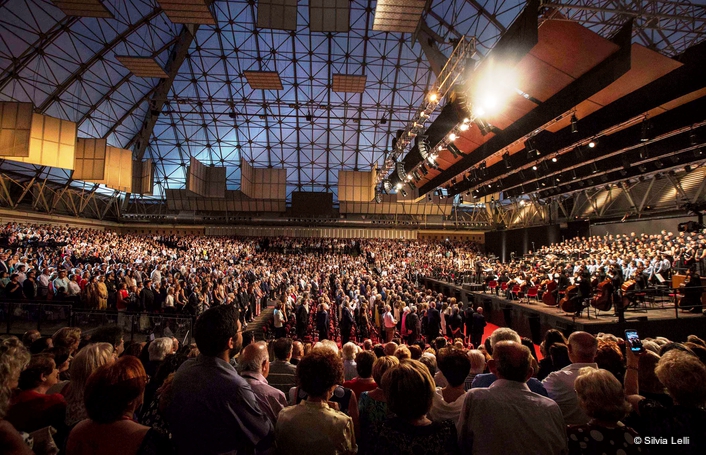 If the RAVENNA networking was straightforward, the demands placed on the console and networking by the Ravenna Festival were considerable.  “In a standard orchestral concert in the Pala de Andrè, we usually have between 60 and 80 players and use 25-to-30 mics,” Carli explains. “For the concert, conducted by Maestro Muti with big orchestra, all was different. We had a double orchestra – one Italian and one from Japan – that played in all the sections. This meant about 120 players, along with a children’s choir and a “banda” [a brass-based traditional Mexican musical style] fanfare. There were a total of 400 people on stage. This concert was also recorded by RAI TV, so I got 64 channels from the Compact I/O via MADI and I added 28 more mics – in total, I used 92 mics.”

The Lawo mc²36 is a RAVENNA/AES67-based, all-in-one mixing desk with a comprehensive feature set that is ideal for use in theaters, houses of worship, live sound and installed sound. “I was impressed by the console software’s flexibility, which gives absolute freedom to set it up just as I want, with patching possibilities not normally possible with live consoles,” Carli says. “The mc²36 is the perfect system for this kind of event. I realized that it would have made the difference on several jobs I did after returning it – not only from the point of view of sound, but also the system’s setup and flexibility.

The festival also gave Carli the chance to continue testing a secret 3D sound processor, as the mc²36 was connected via RAVENNA over Cat6 to the Compact I/O Stagebox and via MADI to the processor. “I have been testing this processor for three years,” he says. “It is based on Wave Field Synthesis, but with many extra solutions that distinguish it from other WFS processors on the market. The company developing that system do not want to be public until it is finished – the plan is to be ready for launching in 2018.” 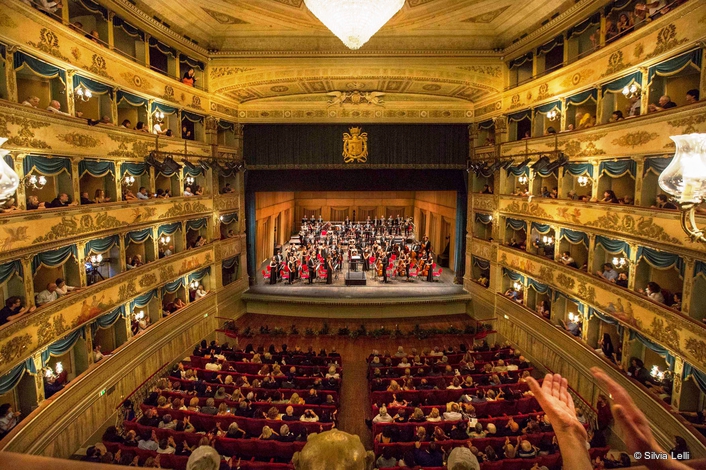 “There are many reasons for choosing Lawo; two are particularly important,” Carli reflects. “One is the company’s philosophy – they choose to work with the RAVENNA open protocol. I have been a fan of open source technology for a long time, not for financial reasons but for philosophical reasons. Sharing our knowledge allows us to grow faster and better. The second reason is the fact that Lawo systems are really stable and reliable.”

“During rehearsals for the concert conducted by Riccardo Muti, his wife Cristina came to the FOH platform and asked me what we’d changed, as the system seemed to sound better than usual, and when Muti asked how the sound was, Cristina told him it was because I was using a new audio console.”

Established in 1990, the Ravenna Festival offers an extremely varied program of music and performing arts every year from May to July, when the city of Ravenna becomes a stage for two months bringing its gilded basilicas, historical theatres, its cloisters, gardens, squares and ancient buildings back to life.

These extraordinary places, some of which are UNESCO World Heritage sites, are a reminder of the city’s history as an ancient imperial capital. The Festival’s artistic directors, Cristina Mazzavillani Muti, Franco Masotti and Angelo Nicastro, yearly define a rich program centered on a culturally and artistically relevant theme. Past themes include early musical themes (“Salieri and the Vienna School”, “Around Rossini”, “Bellini and Wagner”) and visionary ones exploring the Mediterranean, the East, the Apocalypse, visions, deserts and pilgrimages, in a mix of popular and fairy tale, sacred and profane...

Since 1997, the Ravenna Festival has followed “The Paths of Friendship”, a series of pilgrimages touching on cities wounded by war, re-establishing ancient ties to places that have made history and building “bridges of brotherhood”. Leading these journeys is Riccardo Muti, with the Philharmonic Orchestra and Chorus of La Scala, the Orchestra and Chorus of the Maggio Musicale Fiorentino, the Musicians of Europe United – an ensemble of leading players from Europe’s major orchestras – and, most recently, the Cherubini Youth Orchestra. 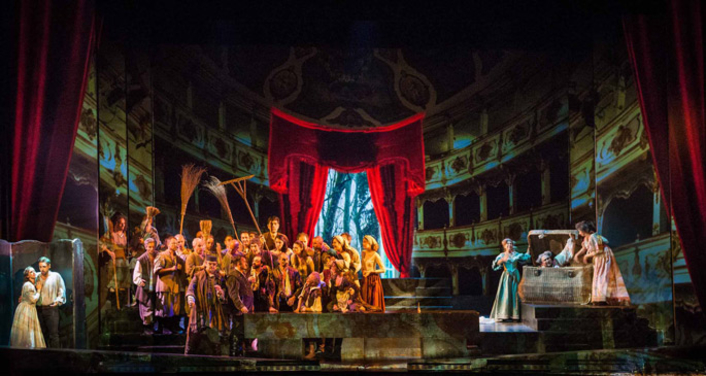 Founded by Muti in 2004, the Luigi Cherubini Youth Orchestra is the Festival’s resident orchestra, and features young musicians from all over Italy as a link between Accademia and the professional world. In 2012, the Festival was extended to the rest of the year, enlarging the limits of its original summer months with the invention of the Autumn Trilogy, whose formula alternates three different operas on the same stage on consecutive nights. In 2015, a tribute to Giacomo Puccini and his masterpiece, “La Bohème”, celebrated the genius of another universally known Italian composer, to whom the musical theatre of the 20th century is profoundly indebted.

With its wooden Communicative Theatre collapsing after more than 100 years of use, Ravenna’s Public Administration appointed brothers Tomaso and Giovan Batista Maduna to build a new facility in the Piazzetta Degli Svizzeri, a squalid square surrounded by slums in the heart of the city. Bringing architectural experience ranging from the restoration of La Fenice, the most famous theater in Venice to the first railway bridge connecting Venice to the mainland, they began work on the Teatro Alighieri in 1838.

The building – a neoclassical structure similar to the Venetian theater – was dedicated to Dante Alighieri and opened in May 15th 1852 with a performance of “Roberto il Diavolo” by Giacomo Meyerbeer and the ballets “La Zingara” and “La Finta Sonnambula” with the étoile Augusta Maywood.

Over almost two centuries of life, the orchestra pit, stage, and parterre have hosted performers from around the world – notably Benedetto Croce and partner, Angelina Zampanelli, attended a recital by Ermete Zacconi in 1899, and few years later, Gabriele D’Annunzio and Eleonora Duse came to see “Tristano e Isotta”. On that night, all the box office revenues were donated to the Civil Hospital and the Vate offered 100 lire, while a seat in parterre cost four lire.

The Theatre closed for restoration in1959 and opened eight years later to begin the journey to its present international notoriety. In February 2004, a performance of “Ridotto” was dedicated to Arcangelo Corelli on the 350th anniversary of his birth in Fusignano.

The Palazzo Mauro de André the signature of a particularly refined architect – Carlo Maria Sadich, designer, among other things, of the Estate Romana (Roman Summer) at the Circus Maximus in 1984.

Named after Mauro De André, the brother of singer-songwriter Fabrizio, the Pala was inaugurated in October 1990 and hosts sporting, business and artistic events. The complex has three exceptional architectural features – a 33m-high, white square dome of a reticular metal structure covered by a translucent fiberglass membrane; Alberto Burri’s Grande Ferro R sculpture, reminiscent of the hull of a capsized ship; and the Danteum with stone pillars colored iron and red (representing Hell), Carrara marble pillars (representing Purgatory) and crystal pillars (Heaven). The mosaic, made by Elisa Montessori and Luciana Nocturnes, is also beautiful.

The Pala’s interior seats 3,800, but the area can be adapted with movable tiers which, sliding on rails, can be placed open-style at the back. Every year the Pala hosts some of the most important events of the Festival. Its inauguration was held in 1992, with a concert marking the 500th anniversary of the discovery of America, with Riccardo Muti leading the Philadelphia Orchestra.