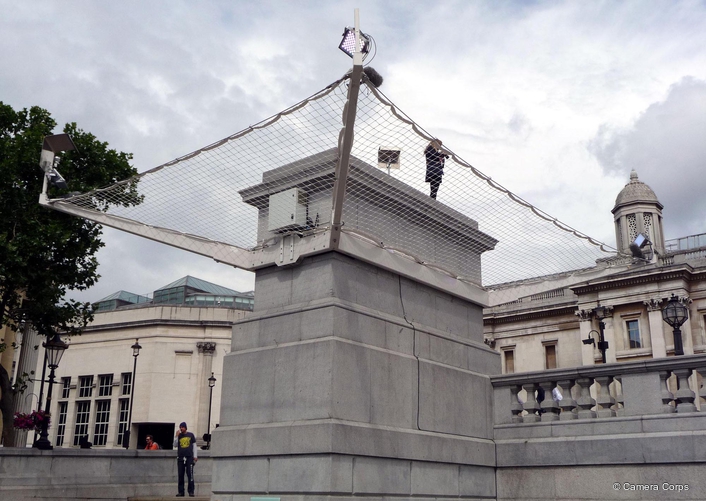 London Trafagar Aquare
Camera Corps' Q-Ball robotic HD cameras have successfully completed 100 days of continuous service as a key element of OB coverage from the 4th plinth in London's Trafalgar Square. The cameras were chosen by 021 Television, part of Gravity Media Group, to provide video coverage of Antony Gormley's 'One & Other' project. A total of 2,400 people participated in the event, some promoting their favourite cause or charity while others simply admired the view. The Q-Ball cameras were used from July 6 to October 14, accumulating content for the production of 60 minute reports transmitted on Sky Arts 1 HD each Friday evening. Live HD video from the cameras was also downconverted and streamed for the entire duration of the round-the-clock event via the Sky Arts website www.oneandother.com.

"Q-Ball embodies nearly 30 years of experience in robotic camera design," adds Camera Corps' founder and managing director Laurie Frost who designed the original Hot-head in the early 1980s. "Our objective was to combine a high-precision digitally-controlled drive mechanism, high-quality HD imager and long-range zoom optics in a compact all-weather housing that would merge easily into any studio set or OB location. First exhibited at NAB this year, Q-Ball has already proved one of the most successful products in Camera Corps' history. Q-Ball cameras are currently providing action shots during a reconstruction by Netherlands-based VPRO broadcast network of Charles Darwin's voyage on 'The Beagle'. The salt-water conditions of the 10-month journey through the Atlantic and Pacific oceans, commenced in September, make this reality television at its most challenging." A full dual-mode robotic colour camera, Q-Ball is housed in a highly robust 115 mm diameter sphere machined from solid aluminium. Pan and tilt can be operated at any speed from 4 seconds to 20 minutes per revolution through an unlimited number of turns. Integral high-precision low-noise motors allow the camera to be repositioned smoothly during live shooting rather than merely between shots. Designed to allow rapid exterior or interior rigging and de-rigging, the Q-Ball weighs 1.3 kg including mounting shaft and can be operated at any angle. The integral camera incorporates a 1/3 inch 2 megapixel 16:9 CMOS sensor delivering 1080i/720p HD or 625/525 SD, both at 50 or 59.94 Hz and in 16:9 or 4:3 aspect ratio. Signal-to-noise ratio is >50 dB. Focus can be controlled manually or automatically. The Q-Ball is fully compatible with Camera Corps' range of pan/tilt and CCU controllers. Its interface delivers up to four channels of audio embedded into the SDI feed. It operates from 9 to 18 V DC power supply. The camera heads are available pre-painted to match any required colour scheme, including jungle camouflage. 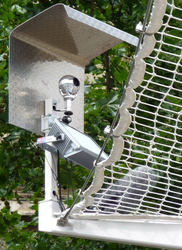 021 Television is at the forefront of outside broadcast operations in the UK and Europe. Based in Birmingham with a satellite office in London, the company is ideally situated to reach locations throughout Britain with speed and efficiency. 021 has a comprehensive range of trucks and equipment including a large complement of HD and SD kit. 021 Television serves terrestrial and satellite networks as well as independent production companies and overseas broadcasters. Camera Corps specialises in providing high-volume support services for reality television programmes as well as very large-scale sports events. The company has achieved a pre-eminent reputation for its ability to acquire exciting and unusual television content from exceptionally challenging environments. Its ever-growing arsenal includes high-level cranes, HD and SD motorised tracking cameras, underwater cameras, bullseye-mounted archery target cameras and fire-proofed high-temperature cameras. The Camera Corps team expands during large-scale events from 10 full-time staff based at Shepperton Studios to as many as 200 specialists, including highly-skilled rock climbers able to establish camera positions in almost any location.