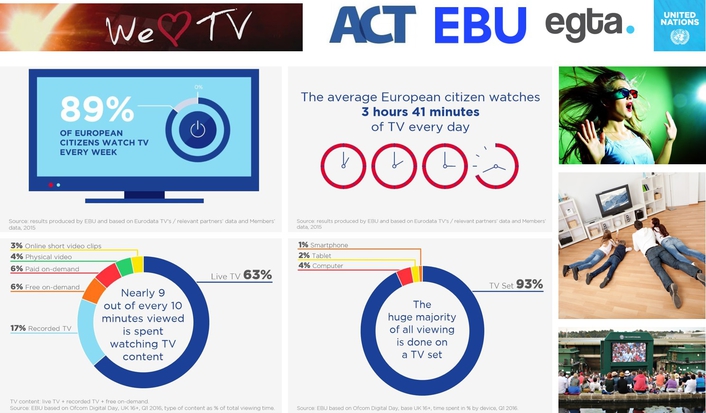 The European Broadcasting Union (EBU), the Association of Commercial Television in Europe (ACT) and egta, the Brussels based association of television and radio sales houses are underlining the impact and reach of the television industry on the occasion of the 20th anniversary of World Television Day (21 November).

As part of the annual United Nations initiative the three organisations have produced a 30 second video emphasising the impact TV has on European society. It will be shown by broadcasters across Europe, Asia, Canada, USA and Australia on 21 November (please see here: http://bit.ly/WorldTVDayVideo2016).

Broadcasters can add their own local content to the video before airing the clip across their networks or online portals. 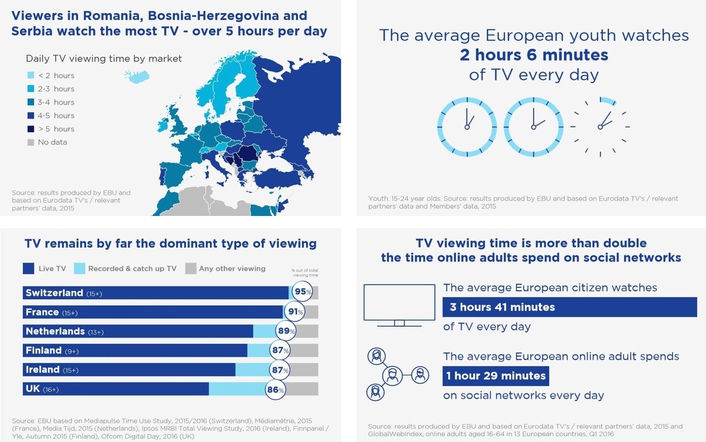 For this occasion, an infographic with facts and figures about the TV industry has been created and is available for download here

To celebrate their love of television, viewers are encouraged to use the hashtags #WeloveTV and #WorldTVDay on social networks on 21 November. 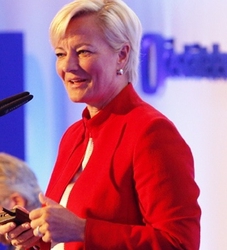 EBU Director General Ingrid Deltenre says that TV plays a huge role in contributing to society: “89% of European citizens watch TV every week. Its reach and impact is incredible. Public service television reaches 60% of European citizens every week and accounts for 20% of all TV viewing." "These broadcasters play an indispensable role in the functioning of democracies and contribute to the cohesion of society. Despite the many choices consumers now have television remains the dominant medium with more and more of us watching across all platforms,” she added. 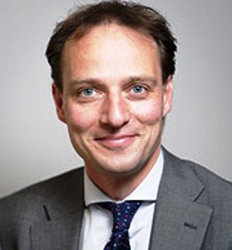 Magnus Brooke, Chairman of the ACT Board, explains: “Commercial broadcasters drive investment in the production of high quality original European TV content. From news and documentaries through to drama, children’s programming and family entertainment, our goal is to produce ground breaking content to push the boundaries of creativity, originality and the very best entertainment has to offer. High quality original content that speaks to our viewers and their lives in each Member State of the EU lies at the heart of everything we do.” 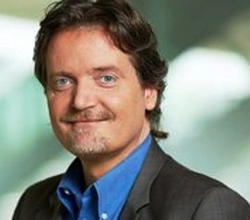 “TV has impressively broken its historical linear chains, its one-way signal and its living-room constraints” says Jan Isenbart, egta President, “Today’s global media sphere is mainly a video sphere; and within this video sphere, it is the daily professional content from TV stations all over the planet that we dedicate by far the biggest chunk of our screen-time to.  In fact, almost any digital device is also a TV screen today…or will be soon! TV’s reach, impact and effectiveness thus remain unchallenged, be it for information, entertainment or commercial communication.” 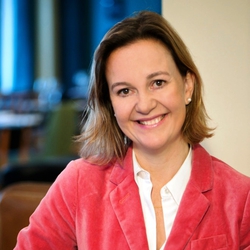 Caroline Petit, Deputy Director, United Nations regional information Centre added: “We are happy to see these three key associations partnering up again to celebrate World TV Day, especially as we are now one year into the 2030 Agenda for Sustainable Development. All aspects of society, including the media and television, can play its part in implementing this people’s agenda.”

About ACT
The Association of Commercial Television in Europe (ACT) represents the interests of leading commercial broadcasters in 37 European countries. The ACT member companies finance, produce, promote and distribute content and services benefiting millions of Europeans across all platforms. ACT engages with the EU institutions to achieve a balanced and appropriate regulatory framework which will encourage further investment and growth in our sector.

About EBU
The European Broadcasting Union (EBU) is the world’s foremost alliance of public service media (PSM). Its mission is to make PSM indispensable. They have 73 Members in 56 countries in Europe, and an additional 33 Associates in Asia, Africa and the Americas. Its Members operate nearly 2,000 television and radio channels together with numerous online platforms. Together, they reach audiences of more than one billion people around the world, broadcasting in more than 120 languages. They are one EBU with two distinct fields of activity: member services and business services. Their member services strive to secure a sustainable future for public service media, provide members with a centre for learning and sharing and build on our founding ethos of solidarity and co-operation to provide an exchange of world-class news, sports news and music. Their business services – operating under the Eurovision brand – are the media industry’s premier distributor and producer of high-quality live news, sport and entertainment with over 70,000 transmissions and 100,000 hours of news and sport every year.

About egta
egta is the association representing television and radio sales houses, either independent from the channel or in-house, that markets the advertising space of both private and public television and radio stations throughout Europe and beyond. egta fulfils different functions for its members in fields of activities as diversified as regulatory issues, audience measurement, sales methods, interactivity, cross-media, technical standards, new media, etc. During its more than 40 years’ existence, egta has become the reference centre for television and radio advertising in Europe. egta counts more than 140 members operating across 40 countries.

About UNRIC
The Brussels-based United Nations Regional Information Centre for Europe – UNRIC – provides information on UN activities to 22 countries and is active on social media and websites in 13 languages. It acts as the European communication office of the United Nations and its aim is to engage and inform European citizens about global issues. It also liaises with institutions of the European Union in the field of information. Its outreach activities, joint public information campaigns and events are organized with partners including the EU, governments, the media, NGOs, the creative community, and local authorities.