Portable Heaven for Noises Off 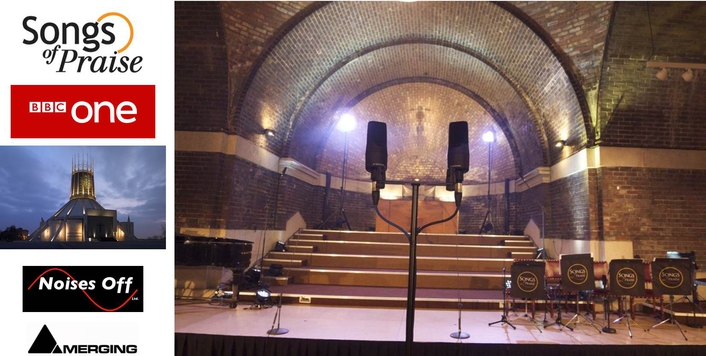 New innovative venture chooses Horus and Pyramix for Songs of Praise recording
After a year of operating as a freelance sound supervisor, one inescapable truth was becoming more obvious to Julian Gough; production budgets were decreasing.  One of the major costs of any outside broadcast is supplying the vehicles, but as technology has continued to provide higher quality in smaller packages, a number of video hire companies were offering a complete set of cameras and associated vision mixers and accessories in flight cases.

This then left the audio requiring large mixers and racks of gear which would normally be housed in a specialist audio truck.  Could the audio rig be dealt with in a similar way?  A meeting with eMerging at the 2012 BVE event provided the answer.

Mr Gough had used Pyramix many times during his time with the BBC so that part of the puzzle seemed relatively easy to solve but how to get a mixer, speakers, microphones, microphone preamplifiers and all the other items into a standard estate car? Also on display on the stand was the Tango 2 from Smart AV which only had 8 faders but was able to access many more channels with relative ease. 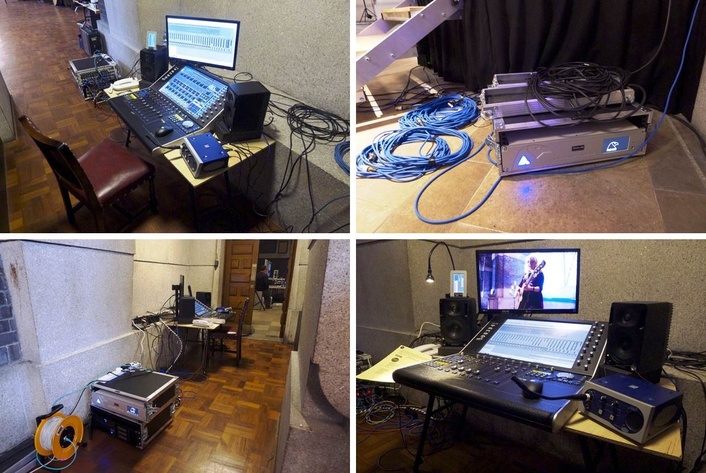 If this was used to control the powerful mixer within Pyramix, this might also work but that still left a lot to cram into the car.  Another item on display caught Julian’s eye.  This was the soon to be released, Horus Networked Audio Converter from Merging Technologies.  Once the concept of Horus had been explained including the enormous convenience of operating on the RAVENNA network, the last piece of the puzzle had been solved.  The reduction in size, reduction in cable and the convenience of the in-built routing made a big difference but the real joy was that Horus also had high-quality mic pres that could be remotely controlled so yet more boxes could be saved. If this was the solution, there were only two snags, Horus was not shipping yet and this little bundle was going to be costly enough to need some additional finance.

By the end of a busy summer for Noises Off both these problems had been solved.  Not only was Horus available and it had already picked up a cluster of industry awards but media finance specialists, Fineline, had accepted the business plan and advanced the cash needed to get this project off the ground. In October a booking came in to record the perennial BBC Sunday night “Songs of Praise” in the crypt of Liverpool Metropolitan Cathedral.  It had been decided that the carry-in option would be easier and less costly but that meant that this whole rig had to be ordered, delivered, put together, tested and the new equipment mastered in a few weeks, all whilst other assignments were being undertaken. The challenge was also on for eMerging staff who were tasked to build a fully specified PC for the Pyramix, in the smallest possible box without fan noise. The recording took place on 26th November and went almost without a hitch.  All the gear worked fine but the room used to monitor the sound was acoustically challenging and using unfamiliar speakers meant that some mixing decisions had been made that were not optimal.

Julian Gough takes up the story; “I was confident that everything would work technically but mixing in an unknown and uncontrolled acoustic was always going to be a challenge. I had foreseen this and purchased portable acoustic treatment, sadly they had been delivered damaged and not having enough time to get them replaced, I had to leave them at home. In addition, the programme recording schedule meant we had very little rehearsal time with the choir and musicians in situ before we had to go for a take. I also had to get used to mixing in the box with a controller, quite a step from using a conventional mixer. The whole ‘in-the-box’ Merging solution worked well and delivered the sort of low latency figures that are essential for this sort of work. Having a built in multitrack recorder is a huge advantage and gave me the option to do a little bit of re-mixing back at my place which resolved the minor monitoring issues and the end result sounds excellent.  Now that I have proof of concept, my challenge for the New Year is to really launch this service properly and do some marketing.”  He continues; “What is certain is that the pressure on production budgets is going to be just as severe next year and going forward, so Noises Off is offering a more cost-effective solution without compromising the end result.”