The Pope's Visit to Germany 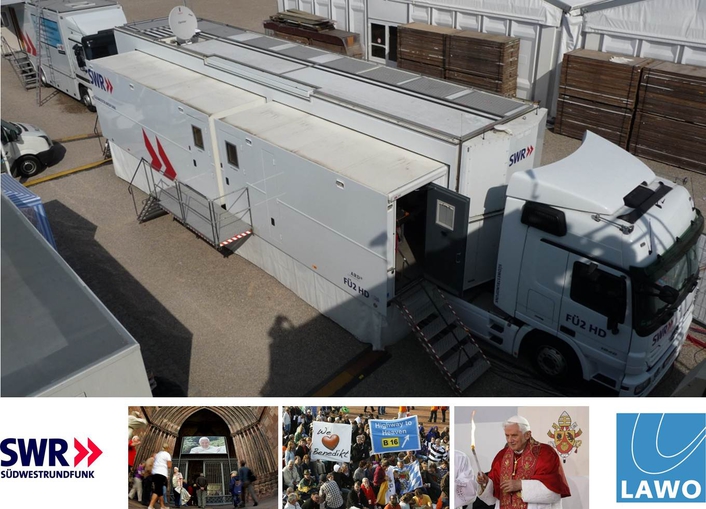 SWR OB vans broadcast live with Lawo technology
When the Pope is travelling, no expense is spared to assure the highest security standards for everyone involved. This applies particularly to broadcasters reporting directly from the special occasion and, as a result, demands extensive logistical organization on their part. The German broadcaster SWR was at the centre of the action for the Pope’s visit to Freiburg, providing OB vans for radio and television coverage, and with Lawo consoles playing a central role.

Coverage of the vigil held on the Saturday evening, attended mainly by young Christians, required a total of approximately 70 microphone channels. To handle these, SWR provided its Ü1 mobile exclusively for audio mixing, in addition to the FÜ2HD truck. Based at the Freiburg Convention Centre, the FÜ2HD mobile was not only responsible for the international video feed of Saturday’s vigil, but also for two additional control rooms, providing German broadcasters ARD and ZDF with entire programming for to the papal visit in Freiburg. Overall, FÜ2HD provided a total of three control rooms. Radio coverage for a Sunday morning service at the airport was provided by SWR’s Ü5, with additional SWR radio OB vans on-site.

MaximumSecurity
With security levels as high as for a NATO summit stipulated by the organizer, the spacious SWR compound at the Freiburg Convention Centre was under constant surveillance by four security guards. During the visit, the city was off-limits for civilian drivers, leading to significant delays for employees commuting to their workplace, which had to be taken into account for the production’s logistic planning. The immediate area surrounding the Pope was only accessible to those with special security clearance, who also had to pass extensive security checks. With the same rules being applied to the equipment, delays became ever more severe, and added to the planning complications.

Complex Production
Similar to the coverage of large sport events or elections with regard to the technological requirements, the standard preparation time for such an event is usually around three to four days. The Lawo desk features 140 microphone inputs, 192 DSP channels, and 56 faders, all combined with a router with a redundant routing card, offering 8,192 x 8,192 crosspoints. With this technological support, the FÜ2HD’s Lawo mc²66 is perfectly suited to meet the requirements of such large-scale productions. In addition, four program outputs allow for multiple broadcast feeds. In the case of a failure, backup is provided not only for the program outputs and broadcast feeds, but also for the monitoring system and all aux sends via a Digidesign Pro Tools.

“Our requirements for the Lawo desk and router were extremely high on this occasion since we were simultaneously running a total of three control rooms in the FÜ2HD and a remote container. To enable us to work flexibly with all audio signals in all three control rooms, we connected an additional audio console to the central Lawo router via MADI, which was also controlled from the console,” explains Carsten Higler, technical director for special projects at SWR, when asked about the technical effort involved in the production. In conclusion, Erich Ebert, sound engineer from SWR in Stuttgart describes just one of the advantages of the Lawo console: “The flexible VCA control is incredibly useful when processing multi-channel sources.” 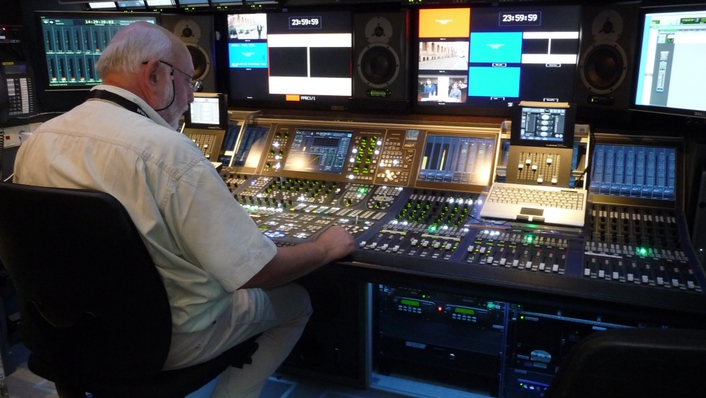 The Pope's Visit to Germany 2011
Lawo