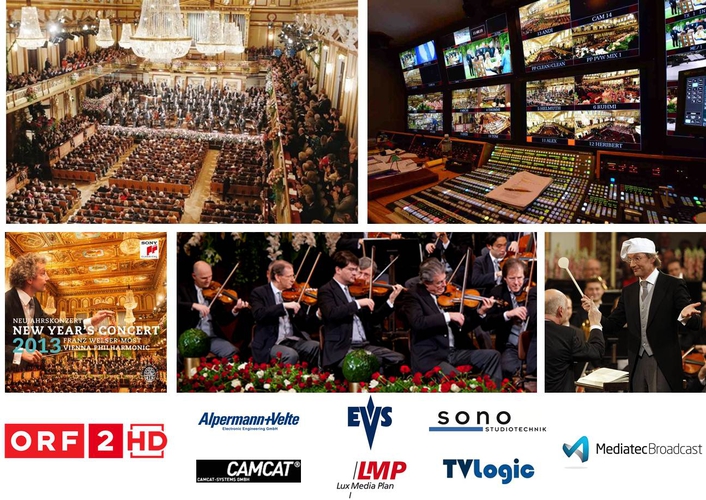 New Year's Concert in the Golden Hall of the Vienna Musikverein
It has long been a Philharmonic tradition at the New Year to present a program consisting of the lively and at the same time nostalgic music from the vast repertoire of the Johann Strauss family and its contemporaries. These concerts not only delight the audiences in the Musikverein in Vienna, but also enjoy great international popularity through the world wide television broadcast, which now reaches over 80 countries.

For the 8th time Imre Sereg was engaged by ORF to lead the technical production of the concert. This year he was there with Mediatec Broadcast’s HD1. The concert was recorded with 11 LDK-8000 cameras. The coverage of the special music effects during the concert was achieved with two Cerberus HD1200 cameras from Lux Media Plan (LMP) while the camera flights a were carried out with a CamCat-colibri, a rope camera running below the ceiling diagonally from the gallery right up to the organ left. Alpermann+Velte supported the production with a Rubidium series TC generator and inserter.  For the transmission of the whole event to Japan a special setup with embedded discrete audio was implemented for NHK. It consisted of two (main and backup) Harris X85 video and audio platforms which were delivered from sono Studiotechnik. 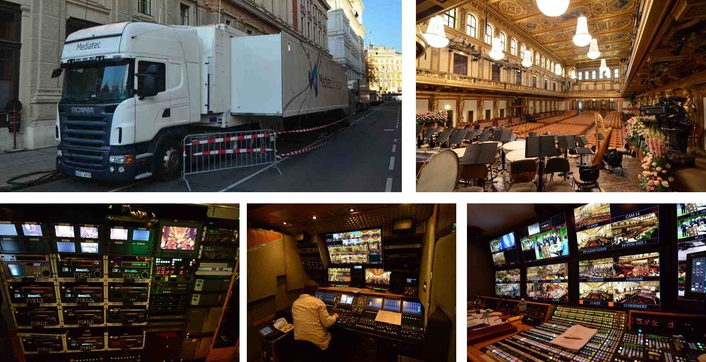 The production was carried out on a Grass Valley Kayak video switcher and on a Lawo mc²66 audio mixer. For lighting control ORF was using the well-established grandMA2 desk in combination with two class 1 displays TVLogic XVM-245W.

Meanwhile Sony Classical has announced the release of the recording of the 2013 New Year's Concert with Austrian conductor Franz Welser-Most who had returned to direct the 2013 concert following the success of his debut in 2011. Since January 4, 2013, the live recording is available exclusively at Arkiv Music and via Amazon.com's CreateSpace's Disc on Demand service and as a download through all major digital service providers. The CD will be released  on January 22. The DVD and Blu-ray will be available on February 5. 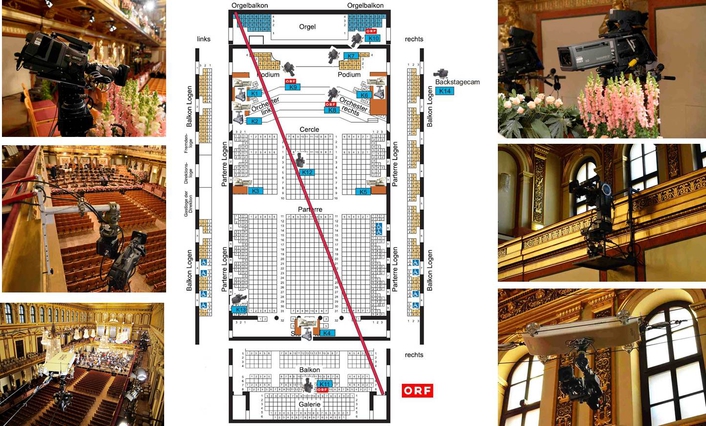 The tradition of the Vienna Philharmonic goes back to 1842, when Otto Nicolai conducted a Grand Concert with all members of the imperial "Hof-Operntheater". This event was originally called "Philharmonic Academy" and is regarded as the origin of the orchestra. Since its founding the orchestra is managed by the administrative committee – a democratically elected body – and works artistically, organizationally and financially autonomous. All decisions are reached on a democratic basis during the general meeting of all members.

For decades the Vienna Philharmonic Orchestra has presented from Vienna's Musikverein an entertaining and heartfelt annual program of music from the wide repertoire of the Strauss dynasty and their contemporaries. The proven formula blends well-known classics with premieres of works that have never been performed before at the New Year's Concert and the result is invariably both joyful and moving. This year's repertoire included 11 premieres (more than ever before) and also pays tribute to Wagner and Verdi in advance of their 2013 anniversaries. 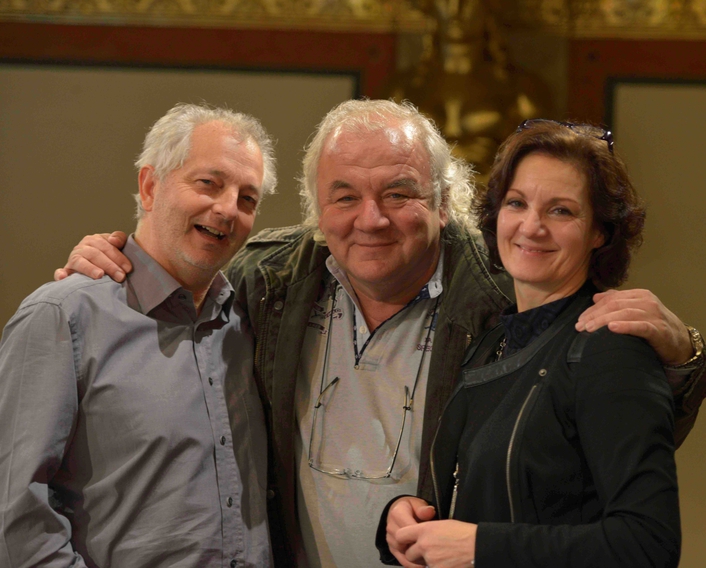 It is the desire of the Philharmonic not only to provide musically definitive interpretations of the masterworks of this genre, but at the same time, as musical ambassadors of Austria, to send people all over the world a New Year's greeting in the spirit of hope, friendship and peace.

This high expectation is also reflected by the technical standards set by ORF to maintain the highest quality levels for a 5.1 surround sound HD production and fullfiled by a production team with skilled technicians on the same high level.

The Vienna Philharmonic have invited Daniel Barenboim to conduct the New Year's Concert 2014.