Along with Christie projectors, the HITACHI SK-UHD4000 cameras represent the first phase of an end-to-end 4K video infrastructure upgrade at the New World Center, campus of the New World Symphony. The multi-format capabilities of the Hitachi cameras will allow the NWS production team to operate the cameras in 1080p HD mode until the remaining infrastructure, including routing and switching gear, is upgraded to 4K.

The seasonal WALLCAST™ concerts, which this year begin October 15, aim to attract and engage new audiences for classical music. Projected live on a 100x70-foot section of the building façade, spectators enjoy a mix of unique performances from New World Symphony Fellows and globally-recognized musicians in the open air space of the adjoining SoundScape Park. The performances, which take place inside New World Symphony’s performance hall, will be captured by 12 SK-UHD4000 cameras and delivered to the Christie system for live projection. An immersive audio experience powered by more than 100 Meyer Sound loudspeakers complements the stunning video simulcasts. 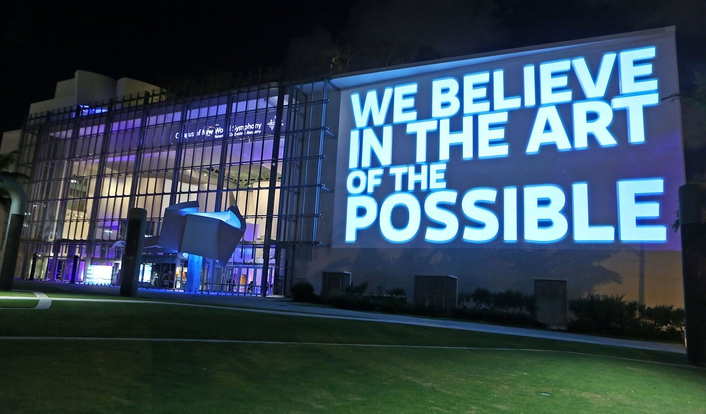 New World Symphony President and CEO Howard Herring notes that the HITACHI cameras excel in low-light environments, which—along with the company’s dedication to training and service—made the SK-UHD4000 the clear winner against competitive 4K-capable cameras.

“We bring video, music and theater together in our orchestral presentations,” said Herring. “A major advantage of the HITACHI cameras is the ability to capture all of these elements in low light. This will allow us to make our WALLCAST™ concerts more vivid, theatrical, sophisticated and intriguing for our 3000-plus attendees at every performance. While the moviemakers of the world regularly shoot in low light, this is not yet commonplace in the orchestral world. The ability of these cameras to pristinely capture images of the performances in the theater as they happen will make these events that much more powerful.”

Herring adds that Hitachi Kokusai, Christie, and other vendors involved in the first phase of its technology upgrade—including Fujifilm (lenses) and Telemetrics (camera robotics)—have been instrumental in bringing New World Symphony’s future vision to life.

“When we started down this 4K path, we were not only looking for machines or products; we were looking for partners,” he said. “All of these companies have listened carefully and addressed our goal in making a true impact on the Miami Beach community, as well as the greater orchestral community. It is not easy to adapt technology to something as specific as orchestral performance, and Hitachi Kokusai has been especially smart and creative in helping us achieve our goals. We now have a partner to help us build on our technical foundation.”

Enlighten Digital of Orlando worked closely with New World Symphony to test, evaluate and design the system, with integration work handled by Blackwater Integration of nearby Lakeland, Florida. Rob Ross, president of Enlighten Digital, notes that the HITACHI SK-UHD4000 was selected after three intense shootouts with several competitive cameras. 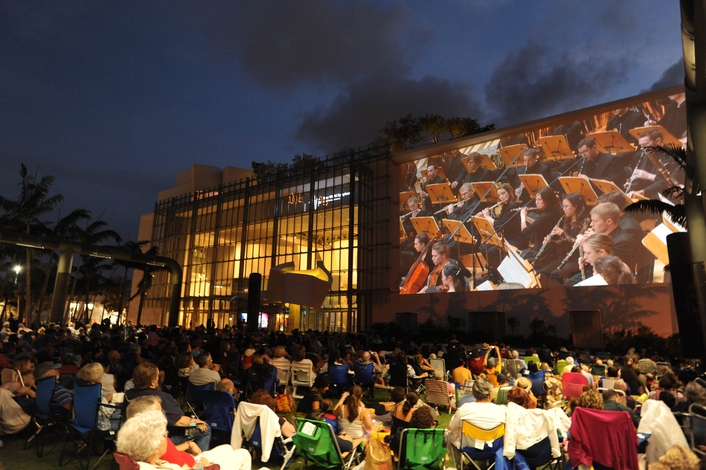 “The SK-UHD4000 is a whisper-quiet camera—extremely important when capturing live orchestral performances, and this camera excelled against the competition,” said Ross. “In a concert hall with dramatic performances, it often comes down to one pinpoint light on the oboe player’s finger in a pitch-dark hall. Upon testing a recorded 4K signal magnified to 400 percent in a very dimly lit room, the HITACHI SK-UHD4000’s still looked impressively pristine, with no noise in the blacks. That was a big deal, and to me one of the most amazing things you’ll see.”

Each HITACHI camera could be configured to pass 4K video through the infrastructure today using a quad-link configuration with four BNC connections. However, both Ross and New World Symphony Director of Video Production Clyde Scott are happy to await maturation of 4K technology throughout the chain before making a full transition from HD.

“The fidelity of the HITACHI SK-UHD4000 in both HD and 4K was confirmed through our tests,” said Scott. “We’re happy to wait for a simplification of how native 4K signals are handled after acquisition,” said Scott. “We know there are improvements in one-wire and IP transport with evolving SMPTE standards on the way. In the meantime, our WALLCAST™ concerts will now be broadcast quality, and will only continue to improve in the future.” 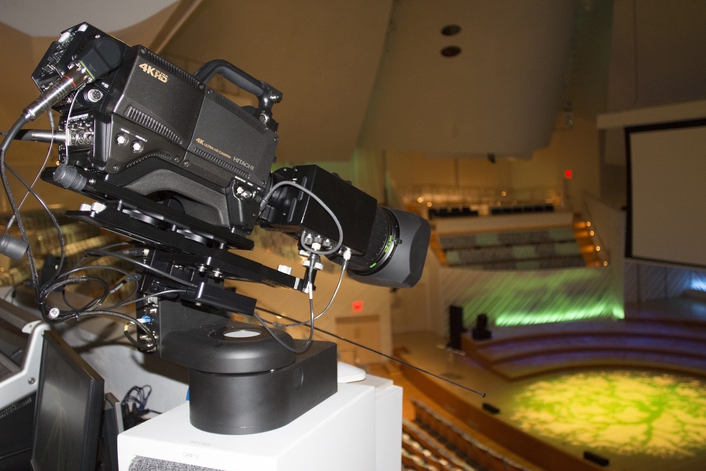 About the New World Symphony
The New World Symphony, America’s Orchestral Academy (NWS), prepares graduates of distinguished music programs for leadership roles in professional orchestras and ensembles worldwide. In the 29 years since its co-founding by Artistic Director Michael Tilson Thomas and Lin and Ted Arison, NWS has helped launch the careers of more than 1000 alumni worldwide. NWS Fellows take advantage of the innovative performance facilities and state-of-the art practice and ensemble rooms of the Frank Gehry-designed New World Center, the campus of the New World Symphony.