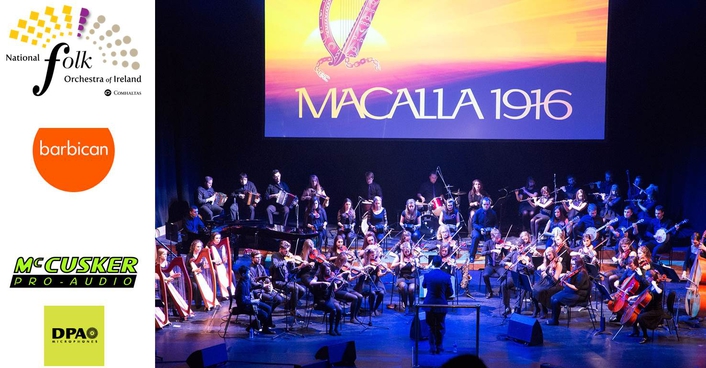 The company’s d:vote™ Instrument Microphones were used to amplify various instruments, including the harps that are so important to the Orchestra’s sound

DPA microphones played a key role in delivering exceptional sound quality to the Comhaltas National Folk Orchestra of Ireland, which made its London debut over Easter with a special concert at the Barbican.

First formed by Comhaltas Ceoltóirí Éireann in the late 1980s, the National Folk Orchestra of Ireland has always attracted the most gifted young Irish musicians and singers. At the Barbican, the 60-plus musicians in the Orchestra were performing Macalla 1916 - a new commission by composer and conductor Michael Rooney to mark the centenary of the Easter Rising. The piece celebrates the rich culture and traditions of Ireland today and reflects on the events of Easter 1916 when Irish republicans launched the rising to end British rule and establish an independent Irish Republic.

Michael Rooney is one of the finest exponents of the Irish harp in traditional Irish folk music and therefore it was no surprise that this piece included eight harpists, all of whom were amplified using DPA d:vote™ 4099 Instrument Microphones.

Barry McCusker, Director of Armagh-based hire company McCusker Pro Audio, was the sound engineer for the event and was responsible for specifying the microphones.

“With the harps in particular, we were looking for a microphone that could be positioned close to the strings without giving us any feedback problems and also without interfering with the way the musicians played,” he explains. “DPA’s d:vote™ Instrument Microphones were ideally suited to this task because they deliver transparent sound without any colouration.”

To fit the microphones to the harps, McCusker used an instrument clip that was originally designed to fit a d:vote™ to a trumpet. 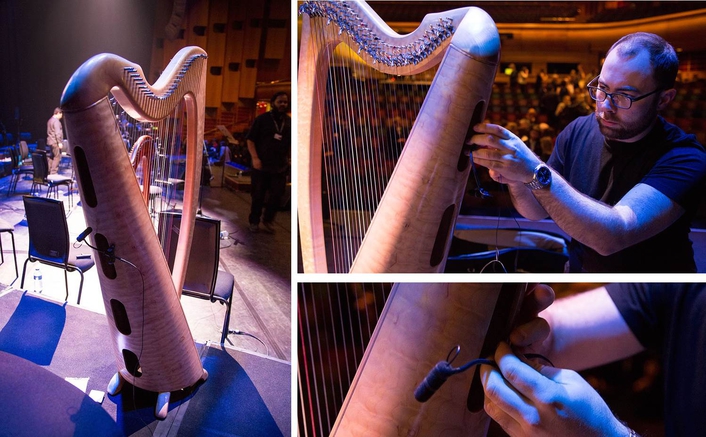 “A local harpist, Eimear Mallon, recommended this approach because she had seen it done before and it had worked well,” he says. “Like all musicians who play expensive instruments, harpists are very particular about clips – they won’t countenance anything that is likely to scratch or damage their harps. However, they were all thrilled with the DPA trumpet clips because they are rubberised and very gentle on the instrument. We taught the musicians how to fit the microphones themselves so that they could get the positioning absolutely right for their individual playing styles. All our monitor engineer, Diarmaid Rankin had to do was check them and they were ready to go.”

McCusker used d:vote™ 4099 Instrument Microphones on a number of other instruments, including two cellos and the double bass. The piece also required two narrators and two singers, all of whom were miked using DPA’s d:fine™ Headset Microphones.

“Both singers and narrators found the headset microphones very comfortable to wear and we were thrilled with the clear and natural sound quality we achieved through the monitors,” he says. “In fact the vocals were so good that quite a few people asked me what microphones I was using and I was more than happy to tell them.” 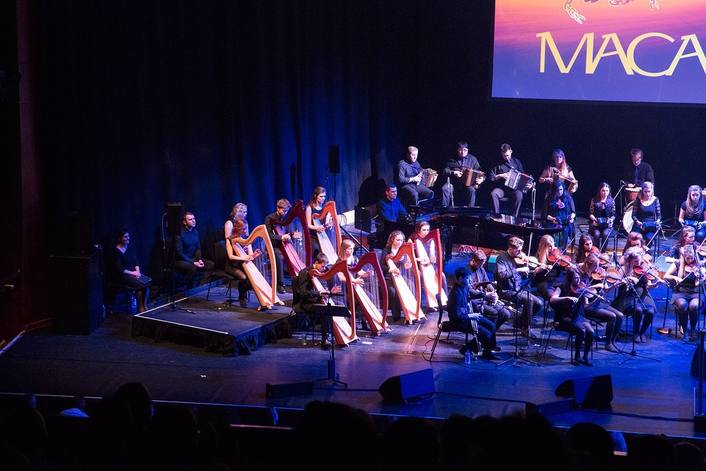 McCusker Pro Audio began trading some years ago as a spin off from the music shop set up by Barry’s father, Enda MCCusker, in 1990. DPA microphones have been a vital part of the company’s hire stock since its formation and have been used for numerous events and concerts, including previous performances by the National Folk Orchestra of Ireland.