Aug 21, 2017 will forever be remembered by the masses as the Great American Eclipse. But for broadcasters, it will be remembered as one of the most impressive technological feats in live stream history!
On the eclipse broadcast, NASA achieved their largest single-day audience on nasa.gov ever totaling at 53.3 million, with 33 million on its Eclipse Live streaming page alone. Combined with NASA’s official eclipse website, traffic on both sites combined totaled at 85.9 million views! According to a NASA spokesperson, this was 7 times more traffic than the previous record held by New Horizon’s Pluto flyby. In short, this was by far the most successful broadcast operation ever accomplished by the space administration.

The Streaming Workflow
So how does Teradek fit into this monumental broadcasting success? For NASA’s official coverage of the eclipse, Teradek supplied all of the live streaming hardware necessary for NASA to deliver their live video feeds to the Internet. This included 5 Cube encoders and 1 Core account, which took feeds from NASA’s 5 different video sources and pushed them to 18 different online destinations, including Facebook, YouTube, Twitch, Ustream and many more.
NASA’s goal was to publish 5 different eclipse programs for the world to watch, which included 3 telescope feeds (H-Alpha, Calcium-K, White Light), 1 processed imagery feed, and of course the regular NASA coverage. This was to give online spectators different viewing options of the event, which look different depending on each solar scope’s frequency.

“Different portions of the eclipse are more spectacular at different frequencies, so we needed constant coverage across the three frequencies,” said Stephen Pizzo, DP and Astrophotographer on this project. “We also wanted to utilize each frequency for our program in addition to sharing them in the clear for fellow broadcasters.”
Within NASA’s mobile solar-observatory (designed specifically for this event) SUNLab, the 3 different telescope optics delivered focused images to 3 RED Dragon 6K monochrome cameras, which all fed HD-SDI video feeds to a LUT box for live tonality adjustments and color grading. Each of these feeds then went to Cube streaming encoders, which transported them to NASA’s Core management platform.
The 4th feed was a processed video image of the eclipse, which was edited through a computer and pushed to another Cube. This feed was sent to the same Core platform as well. 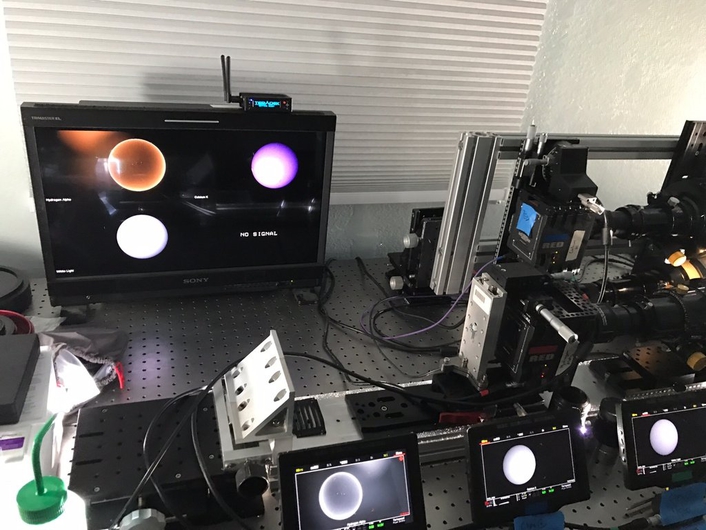 The main program was the 5th feed, which was edited and finalized through a production switcher before being sent to NASA’s captioning device. From there, a distribution amp pushed the feed to the Cube, which transported the stream to Core.
With Core’s cloud-based simulcasting feature, the 5 streams were delivered to 18 different destinations, including Facebook, YouTube, Twitch, Periscope and many others, with over 3 Petabytes of data streamed.

Multicasting for a Mass Audience

As the first eclipse to span the entire continent from sea-to-sea in a century, the Great American Eclipse was a huge deal for NASA. To publicize this extraordinary event, NASA’s goal was to host a major broadcast that would reach viewers all over the world and share this once-in-a-lifetime experience with as many people as possible.
And that’s exactly what they did. Understanding that social media is massive in video consumption, NASA decided to forego traditional TV broadcasts and instead published their main program to every major platform simultaneously. The effect was twofold: streaming online helped NASA EDGE to keep their broadcasting costs minimal while publishing to platforms most people use. Additionally, streaming to these platforms meant most people had access to the videos on a Monday morning, when people at work or school have more access to mobile and OTT devices than TVs.
Teradek is proud to have provided NASA with the technology to successfully deliver this amazing event to millions of viewers around the world. We look forward to our continued relationship with the space agency and future opportunities for collaboration!