MLA Overcomes Four Seasons at Proms in the Park 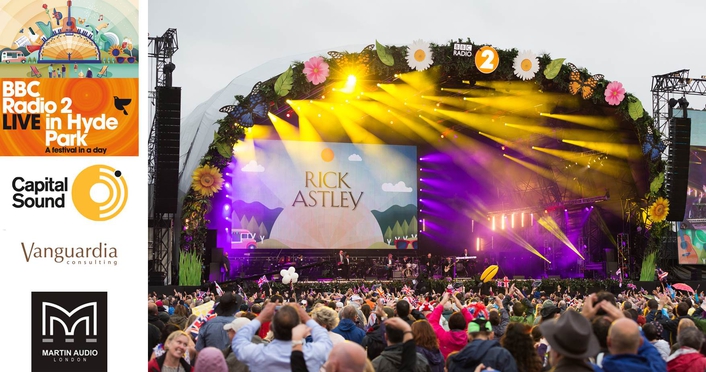 The BBC’s double-header weekend of Proms In The Park and BBC Radio 2 Live in Hyde Park (Festival In a Day) could have been renamed Four Seasons in a Day, given the extreme climatic changes (and fitting name of the Proms headline act).

The extreme high winds and driving rain had blighted the opening day, headlined by Frankie Valli’s band, who were joined by the BBC Concert Orchestra and a line-up including ABC, All Saints, Rick Astley, The Feeling and others. As the following day made way for bright sunshine, Status Quo and Madness got the evening party going and were perfect curtain-raisers for the headline act, Elton John. 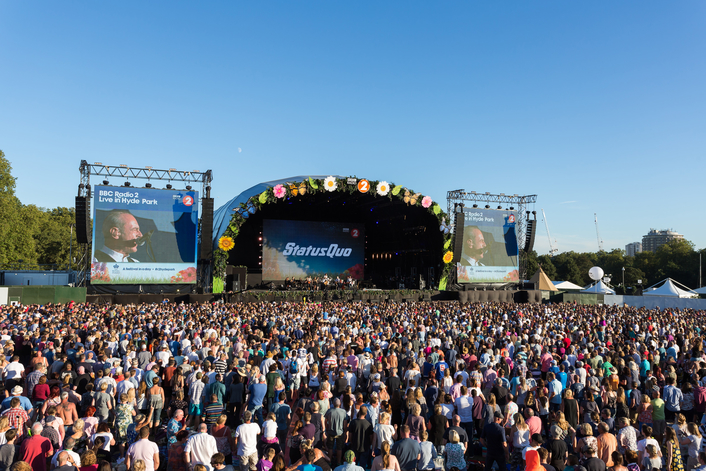 But such changeable weather conditions in a noise sensitive environment is precisely the scenario that Martin Audio’s award-winning MLA Multi-cellular Loudspeaker Array (MLA), and its advanced DISPLAY software, was designed for.

The Martin Audio control environment can store sound presets for different weather scenarios, as R&D Director, Jason Baird explained. “We have designed the system to compensate for changes in humidity — the more humidity there is, the brighter the sound over distance. But we now have a means of doing some simple EQ changes to the HF, which system tech Toby Donovan can apply accordingly.” 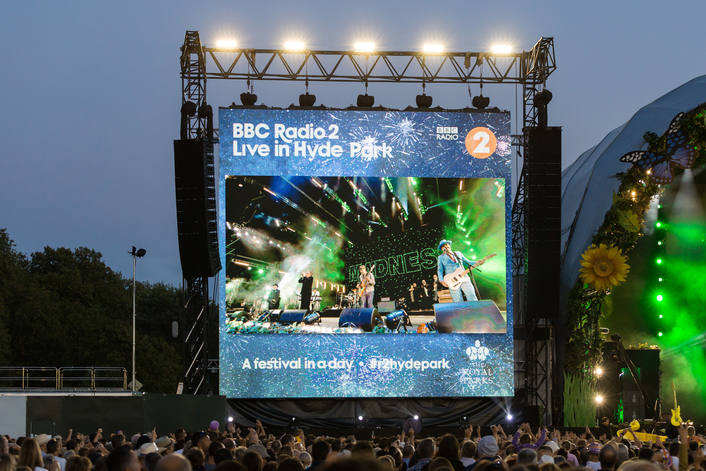 Donovan himself confirmed this advantage as the weather improved dramatically overnight. “By having different presets for different conditions saved as snapshots in the DISPLAY software we could change the set-ups to suit on the day."

Martin Audio’s Product Support Engineer on site, Chris Pyne, also highlighted the ongoing development of the DISPLAY platform, predominantly to increase the LF control and consistency. “There are some more software changes planned prior to release at the end of this month,” he said. “We are looking at the internal balance of the system and aiming to make it more plug and play.”

With the general design model established last year for the Festival Republic-promoted events, and rubber stamped by Head of Production Dick Tee and noise consultants, Vanguardia, 2016 was all about nuances.

The most significant was the addition of a fourth delay ring — giving 12 delay masts in total. Two points were set 350 metres from the mix position, comprising eight Martin Audio MLA Compacts (tapped at a 1000ms delay time). Toby Donovan and crew chief Kevin Smith both approved of the decision. “Festival Republic wanted to extend coverage to the main entrance gate but without any spill — and MLA was more than capable of that,” said the latter.

The other significant change was the positioning of the VIP grandstand. Martin Audio DD6’s trialed so successfully last year in delivering punchy sound that this year Capital Sound standardized on the technology, deploying 14 enclosures inside the pavilion and 12 outside, all controlled from the main desk.

As to the stage design, the main PA hangs again comprised 16 x MLA and an MLD Downfill each side, with 12 x MLA per side acting as sidefills (this year dispensing entirely with the MLD). 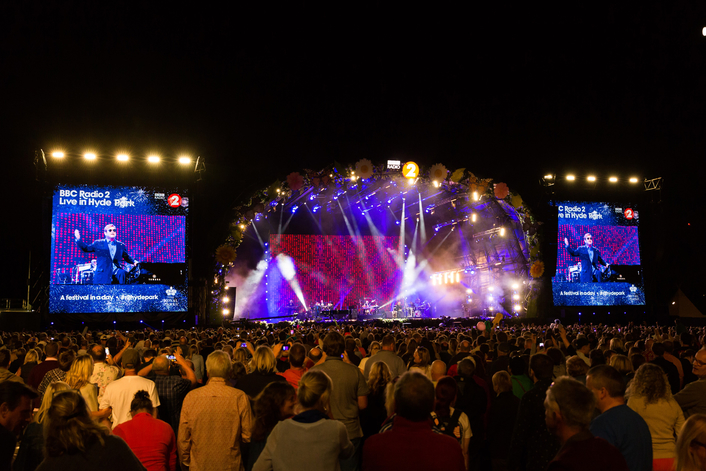 Capital again fielded 26 MLX subs in a broadside cardioid array — 17 forward facing along the front, and nine on top reversed. A pair of Martin Audio W8LM was positioned on every other sub stack, with a further stack of three W8LM as ‘wing fills’ on each side. Distribution around the site was via a 13-node Optocore fibre ring.

Martin Audio’s LE1500s were provided for stage monitoring along with some WS218X as side fills, while DD12’s were also stationed backstage at the VIP interview stage.

Of the 12 delay positions, four were equipped with three MLX in cardioid pattern — these being the whole of Ring 2 and the central delay on Ring 3. 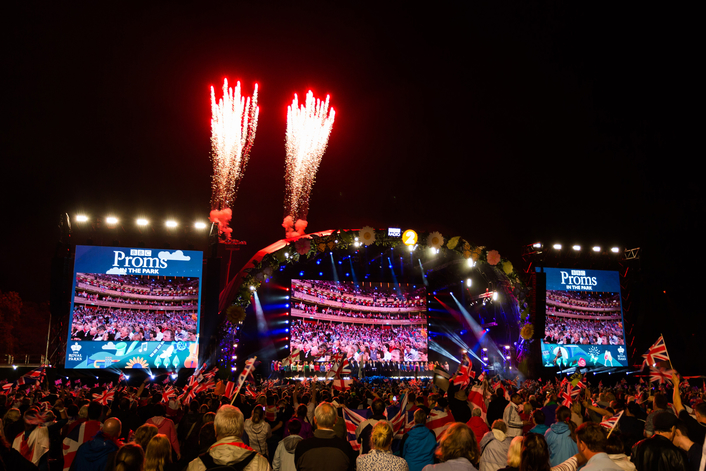 But with the BBC Introducing stage missing this year it was the fourth ring of delays, as well as the swirling winds blowing east that challenged the power of MLA to contain the sound within the boundary, without exceeding offsite levels of 75dB(A). “With so many delay towers, it was a real feat to have achieved show levels while maintaining offsite levels,” believes Jason Baird.

Kevin Smith pinpointed the additional challenge of stationing speaker positions out of camera shot. “For PITP it’s all about getting the camera shot, the most critical one being from the crane; we even had to move the FOH position is to one side.” 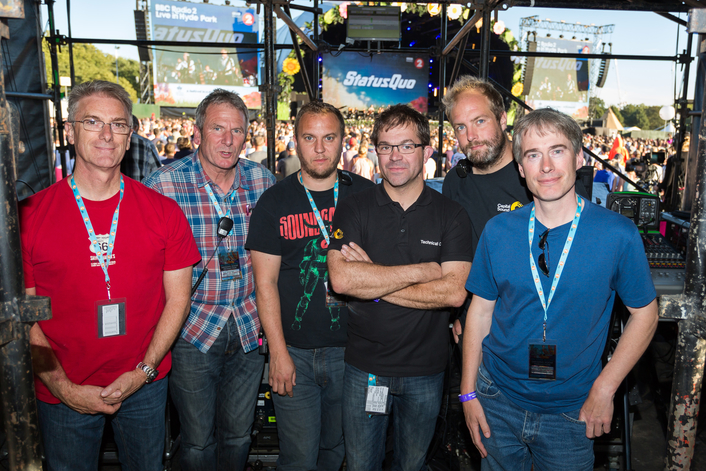 Towards the end of the evening as the pomp, ceremony and national fervour built towards the fireworks crescendo, the FOH desk received increasing stem mixes from the BBC — not only from the Royal Albert Hall but other UK sites.

He also praised the increasing role of DD12s in Capital Sound productions. “They perform really well as orchestra fills and on the VIP stage — they are extremely powerful, and deliver a very clear and nice sound.”

Summing up, he said, “ I’m very happy with the way it’s gone this year — based on the 2015 model and modification with Jason [Baird’s] design.”