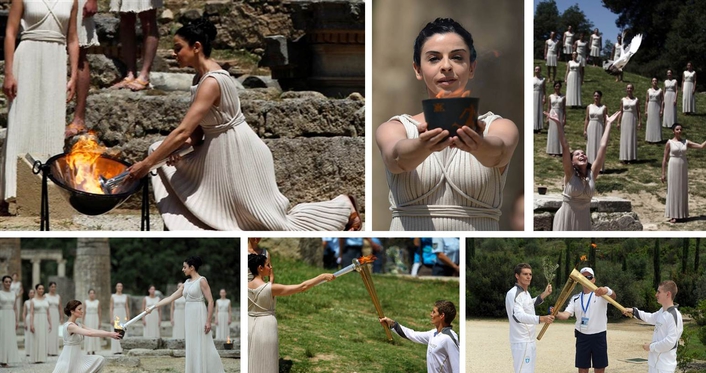 In a traditional ceremony organised by the Hellenic Olympic Committee (HOC), the Flame was lit at the Temple of Hera, next to the historic ruins of the home of the ancient Olympic Games. The High Priestess used a parabolic mirror to capture the sun’s rays to create the Flame. It was then carried into the Ancient Olympic Stadium.

Sebastian Coe, Chair of the London 2012 Organising Committee, said: 'The Olympic Flame lit in Olympia will connect the ancient Games and the modern Games. Cities, towns and villages across Greece and Britain will be connected together and to the London 2012 Olympic Games forever.’

The ancient Games
The Torch and Relay were important elements of the cultural festivals surrounding the Olympic Games of Ancient Greece.

During the Games, a sacred flame burned continually on the altar of the goddess, Hera. In addition, heralds were summoned to travel throughout Greece to announce the Games, declaring a sacred truce for the duration.

Spreading the light from Greece: the modern Games
A very precise ritual for the lighting of the Flame is followed at every Games. It is lit from the sun's rays at the Temple of Hera in Olympia, in a traditional ceremony among the ruins of the home of the ancient Games.

After a short relay around Greece, the Flame is handed over to the new Host City at another ceremony in the Panathenaiko stadium in Athens.

The Flame is then delivered to the Host Country, where it is transferred from one Torchbearer to another, spreading the message of peace, unity and friendship. It ends its journey as the last Torchbearer lights the cauldron at the Olympic Games Opening Ceremony in the Olympic Stadium, marking the official start of the Games.

The Flame is extinguished on the final day of the Games, at the Closing Ceremony.

First London 2012 Torchbearer
British-born Greek 10km swimming world champion Spyros Gianniotis had the honour of starting the Olympic Flame’s journey across Greece. He carried the Flame from the Ancient Stadium, via Pierre de Coubertin’s Grove, before handing the Flame on to 19-year-old London Borough of Newham resident Alexandros (Alex) Loukos.

Alex said: ‘It is an unbelievable honour to be a Torchbearer in the Olympic Torch Relay, especially carrying the Flame in Olympia and representing the city of London.’

Olympic Torch Relay route in the UK
The Olympic Flame will come within 10 miles of 95% of people in the UK, Isle of Man, Guernsey and Jersey. It will enable local communities to shine a light on the best their area has to offer – including celebrations of local culture, breathtaking landscapes and dynamic urban areas. 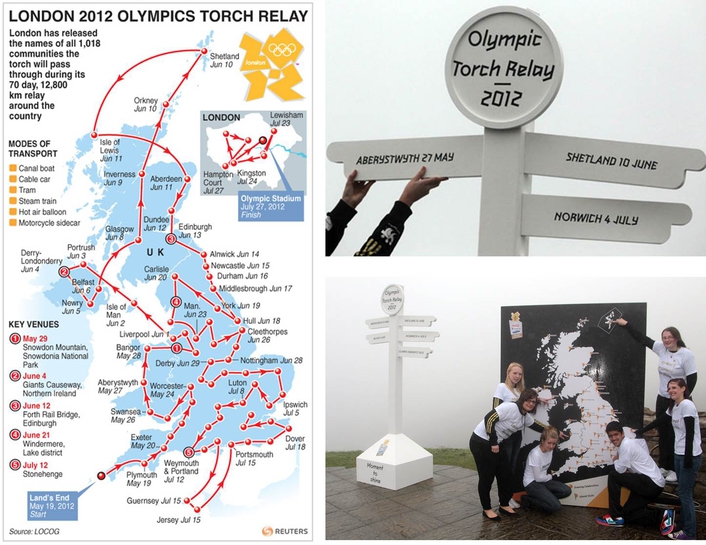