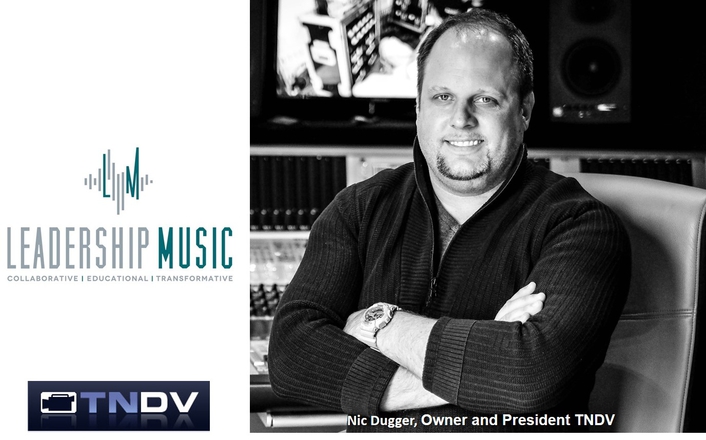 In his first year as an applicant, TNDV Owner and President Nic Dugger is honored to be among the 49 creative industry leaders chosen for Leadership Music’s 29th class. As part of the 2018 class, Nic joins creative visionaries from major organizations and companies including Disney Channels Worldwide, the National Association of Broadcasters (NAB), Opry Entertainment Group, SoundExchange and Townsquare Media.

Founded in 1989, Leadership Music is an annual program designed to create a forum for established music industry leaders. The organization, whose mission is to cultivate a forward-thinking community of leaders who impact the creative industry, has graduated 1,100 leaders to date.

Nic’s selection is interesting given that TNDV is the only mobile production organization represented on the list, and is one of the few companies associated with the broadcast and production industry in the entire 2018 class. Nic also faced tough competition from an overall numbers perspective, making his selection as a first-year applicant that much more impressive. A press release from Leadership Music notes “a record number of applications, up 22 percent from last year,” adding that choosing just 49 to honor from the entire pool of applicants was among the most challenging tasks to date for the selection committee.

All those named to the 2018 class attend an orientation and alumni welcome reception in September, a two-day Opening Retreat in October, and six all-day sessions once a month until graduation in May 2018. That graduation culminates with a two-day Closing Retreat. The complete list of Leadership Music 29th Class honorees can be found here.

“Leadership Music is well-known to everyone in our industry as the gold standard for networking and development in Nashville and the Mid-South region,” said Dugger, whose TNDV is among the busiest mobile production companies in the United States today, with eight trucks and multiple flypacks crossing the nation weekly. “It’s very challenging to find ways to stand out in TV production with so many players in the game. Being selected for the 2018 class of Leadership Music is a great indication that the TNDV team is accomplishing its goals on a level that other successful companies recognize. It is a very big honor, and I am excited to share ideas, learn from others, and most important, help our industry grow and prosper.”

Formed in 2004, TNDV: Television represents the culmination of over 25 years of broadcast and live production for Nic Dugger, owner and president; and his staff of full time engineers. TNDV produces events from small single-camera productions all the way up to multi-million-dollar international TV events, and takes pride in building custom solutions for challenging productions of any size, in any situation.  Recent projects include the 5th consecutive year of live concert productions at the NCAA Final Four, the Wal-Mart shareholders meeting, and season 6 of the multi-Emmy winning Bluegrass Underground for PBS.