LCV in action — immersed in SGM’s LT-100/LT-200 3D pixel tubes at Church of St. John-at-Hackney
SGM LT-100 and LT-200 LED pixel tubes were deployed in an unusual context, when London Contemporary Voices (LCV), one of London’s leading non-traditional choirs, staged its Reflections concert at the 18th century Church of St. John-at-Hackney in London.

Working to a production design by Ali Abbas and Keny Ega-Bourgeois, lighting designer Owen Pritchard-Smith, of Spirit Design, sourced a number of the 3D graphic tubes from the inventory of Chris Morgan’s Blueprint Events to create a ring of shimmering light from the sticks, which are loaded with LEDs, each individually addressable.

LCV had wanted to present a unique stage set for the 300 people who attended, including Bat For Lashes member Ben Christophers and BBC Sound of 2014 nominee Luke Sital-Singh. While the choir performed a number of original arrangements of different songs, vocal percussion and beats were provided by beatboxer BeatFox.

After deciding on the title Reflections for the concert, Abbas and Ega-Bourgeois stated, “We settled for a composite environment that would use the architectural language of the Church and form a landscape composed of a series of elements of varying heights within which LCV could evolve and perform.” 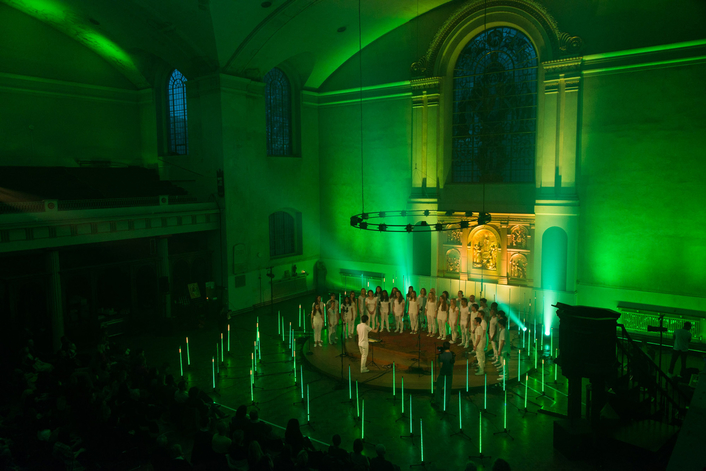 And this is where the 1m and 2m long SGM pixel sticks came into play. Tasked with creating a unique environment in which the choir would be immersed, Owen Pritchard-Smith admitted, “My initial thought was to use projection to bring this set to life, and reinforce the concept of emotional reflection through content and architectural lighting. But this posed a number of issues; firstly, having the choir submersed within a 360 degree set proved to be a key lighting and camera nightmare; secondly projection is an expensive and preproduction-heavy option, and thirdly, the production team was running out of time for set design and construction.

“Then I remembered about Chris at Blueprint and the SGM tubes. Being thin and partially transparent, my key lighting issue was immediately solved. I no longer had to worry about projectors, and there was no need to have a costly set constructed. I challenged the tubes to a production that they may not normally be used to, and they were perfect for a choir that attempts to be non-traditional; incorporating these into their show really has given them an edge they were looking for.”

The tubes were programmed by Chris Morgan in Madrix and triggered from an Avolites Tiger Touch.

“They provided ideal levels and an environment for the performance,” continued Pritchard-Smith. “Their flexibility allowed me to create 3D effects that would not have been possible with other options. Their light weight allowed them to be set up and moved around quickly and with ease, really speeding up get-in time. I was extremely pleased with their output and I decided to dress the choir in white to allow them to reflect the colours that I sent in their direction — fully immersing them in the show.

“I will definitely be using these pixel tubes again to fully explore their potential to create different environments within productions.”