K-Array Branches Out At The Roundhouse 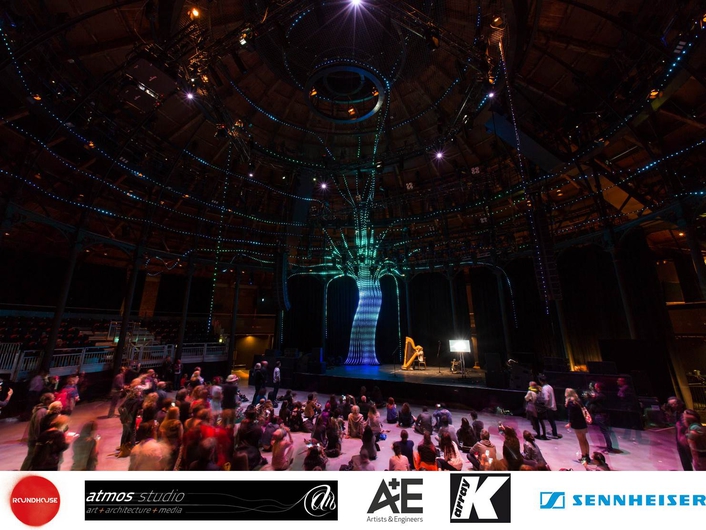 .
Lightning struck all summer at London’s Roundhouse this year, as a unique sound and lighting installation, Arboreal Lightning, formed the centrepiece of the venue’s Summer Sessions. K-array loudspeakers helped transform the former locomotive shed into an interactive art space.

Commissioned by Imogen Heap as the centrepiece for her Reverb mini-festival in August, Arboreal Lightning was a large-scale interactive installation, designed by Alex Haw at his atmos studio, which transformed sound and gesture into a fully immersive environment. Built at the side of the Roundhouse stage, the tree’s LED strip ‘branches’ spread throughout the venue’s structure, reacting to the sounds produced by both performers and audiences.

A key part of the project was an ambisonics surround sound installation so, when performances were not taking place, people could enjoy a totally interactive experience.

“Imogen asked us to build an audio component into the tree and we worked closely with sound designer/composer Robert Thomas on the ambisonics system,” says Louis Mustill, director of production company Artists & Engineers. “We’ve done a lot of work in the past with surround sound and it was really good opportunity to do an immersive audio project in the Roundhouse, which is an amazing space.”

“The idea was to include a 3D soundscape which, as the tree’s ‘branches’ spread throughout the main space of the Roundhouse, had to cover the whole area as well,” says Robert. “We chose an ambisonics setup because we wanted people to hear sounds literally coming towards and going past them. We ended up with a huge soundscape.” 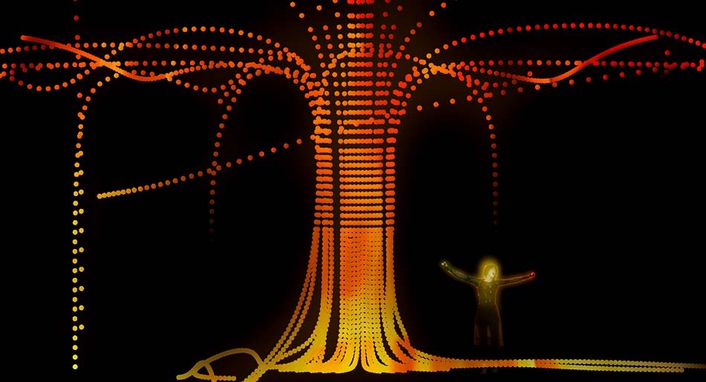 The K-array system comprised a KR402 system mounted in a single line behind the ‘trunk’ of the tree, providing a strong sound source from the tree itself, with six KH15s mounted around the perimeter of the Roundhouse’s main space, plus two more overhead to give the all-important sense of height to the ambisonics system. Two KO20 subs were stacked beneath the stage.

“The sound had to be fully immersive and what I found amazing was the volume and audio quality from such compact speakers,” says Louis. “It’s a really great system for doing surround projects because it’s so small, yet it’s powerful and sounds so good.”

Robert designed four sequential ‘moods’ that the tree could be in - fire, a thunderstorm, a ‘storm’ and a dream section. As the tree reacted visually, the ambisonics system was filled with suitable sounds.

“The first mood had crackling fire-like sounds filling the space, this built up to a crescendo of lightning, thunder and electrical static sounds during the ‘storm’,” he says. “The storm section had sounds like rain falling while, in the dream section, we remixed Imogen’s songs One Time and Propeller Seeds into a kind of ‘dreamscape’.” 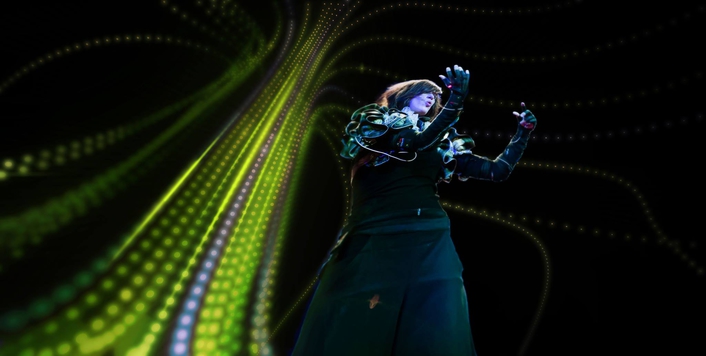 This section was complemented by recorded messages left by members of the public from Imogen’s ‘listening chair’, an interactive exhibit that the artist had installed at the Roundhouse in the weeks leading up to the Reverb festival, as well as throughout the event.

“She invited everyone to engage with the festival by recording a message from the chair,” says Robert. “All the messages were processed in real time - distorting, effecting and panning them to float around in the three-dimensional soundscape while the tree was in ‘dream’ mode.”

Despite considerable technical challenges, the Arboreal Lightning installation succeeded in capturing the imagination of audiences who enjoyed the Reverb festival, as well as non-ticketholders who were given the opportunity to experience it for a limited time.

“There was a lot of work involved, but it was very easy to use the K-array system in a way that created a really good quality soundscape,” says Robert. “What made the speakers particularly appropriate for this project is their excellent directional response. We had to set them back quite a way in the space, but they could still focus the sound in a particular area, which meant we could create a convincing 3D soundscape. 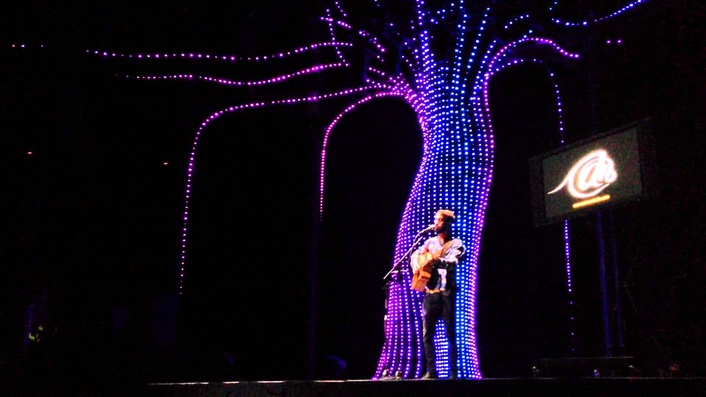 “They are relatively small and quite discreet, but still have the power we needed to project the sound. On top of that, the subs were the best ones I’ve ever worked with, they were so powerful!”

“We were very happy with the finished result, thanks in no small part to the K-array loudspeakers,” says Louis. “We’re talking to Dave and Sennheiser about other projects that we can work on together again in the future, which is very exciting.”

About K-array
K-array is a renowned Italian manufacturer of cutting edge pro audio solutions with global headquarters in Florence, Italy. The company was originally established in 1990 as an acoustic research and installation provider.  Less than sixteen years later, it began manufacturing under the newly established K-array brand. Since then, K-array has introduced a range of product lines providing unparalleled performance and ultra compact speaker solutions for medium to large-scale applications, including touring, events, installed sound and broadcast.