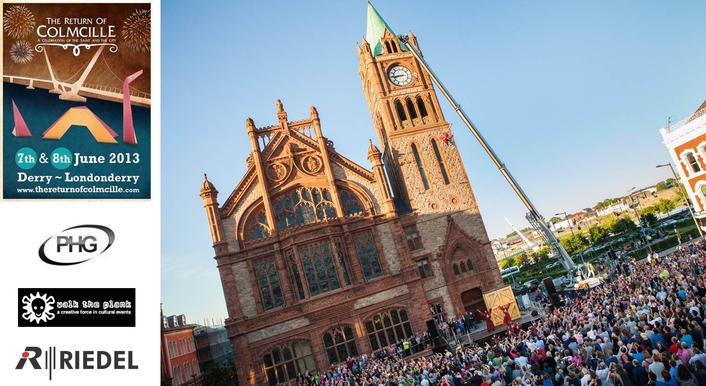 .
Riedel Communications, provider of pioneering real-time video, audio, data, and communications networks, today announced that Production House, Ireland's leading supplier of professional audio systems, used an extensive RockNet real-time audio network to support the finale of "The Return of Colmcille" — a landmark production of the 2013 City of Culture celebrations in Derry-Londonderry. Produced by outdoor arts experts Walk the Plank, "The Return of Colmcille" culminated in a battle between the city's founder, Saint Colmcille and the legendary Loch Ness Monster on the River Foyle. The Riedel fiber network facilitated audio distribution during the impressive finale.

"We chose Riedel RockNet for this historic event because it offers reliability, flexibility, and ease-of-setup, as well as a redundant ring topology," said Niall Lewis, director, Production House. "The system worked perfectly, sounded great, gave us all the flexibility we needed, and enabled us to adapt quickly to last-minute production changes." 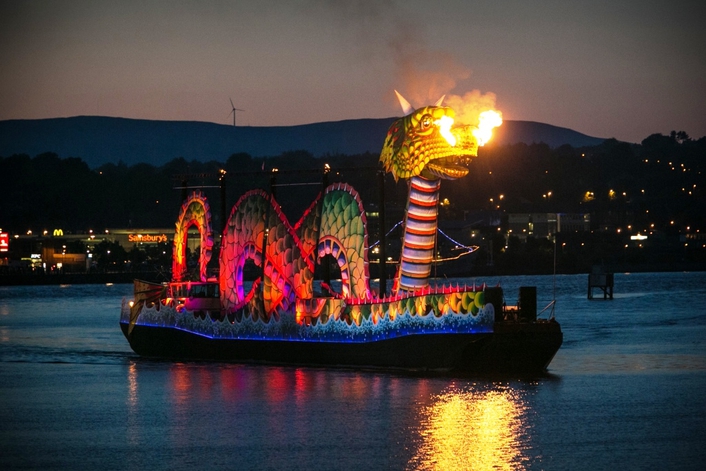 Scripted by Frank Cottrell Boyce, writer of the 2012 London Games opening ceremony, the show was the centerpiece of Derry-Londonderry's time as the UK City of Culture, and the arrival of the monster on the river marked the end of an ambitious 30 hours of performance across the city. Thousands of spectators gathered by the river to watch the battle, which featured flames and fireworks accompanied by original music composed for the special event.

Riedel's RockNet audio distribution consisted of RockNet output modules at each of the 20 PA stacks along the river and on the city's Peace Bridge, as well as four analog input boxes and an output box at the control position. With this configuration, the production team was able to deliver an individual signal — time-aligned via GPS to the monster boat as it progressed down the river — to the appropriate PA stack to create a continuous sound experience. For the pre-show event, which drew 20,000 people, Production House was able to reassign PA stack outputs to ensure optimal coverage, simply by redistributing the audio signal to the various RockNet output modules. The intuitive RockWorks software enabled this critical redistribution capability by providing flexible routing options within the RockNet network.

The RockNet system supported communications between the audio engineer, sound designer, and RF technician. Production House also used the RockNet system to distribute four different timecode feeds for the show caller and the pyrotechnicians at various locations, including the main firing site 1.2 km from the beginning of the monster boat's voyage. Signals were sent to the RF transmission location, and audio and timecode were sent to the monster boat via a 1- watt wireless link.

About Production House (PHG)
Production House // Litton Lane are Ireland's leading providers of professional audio systems specialising in concert touring, outdoor events, and festivals. With warehouses in Belfast and Dublin, we are able to service our local market and markets further afield due to our location to major transport hubs. We carry the latest in loudspeaker, console, and amplifier technology but also maintain a stock of analogue desk and dynamics. Along with our extensive equipment stock we have a great team of people; from Sales and Operations staff through to our experienced Sound and Systems Engineers, we are able to offer a superb service and audio package.

About Walk the Plank
Walk the Plank are outdoor arts experts, who create powerful events with mass appeal. From international stage to village square, our team of experts develop remarkable moments that enrich the lives of our audience through shared experience - encouraging a sense of place, a feeling of pride, and well-being. We empower artists and communities through creative development, transforming people and the places in which they live through opportunities to engage with accessible, artistic excellence. Walk the Plank created the opening and closing ceremonies of Liverpool's European Capital of Culture year in 2008 and opening ceremony of Turku's 2011 European Capital of Culture in Finland.