HSL Supplies Lighting for The Israeli Opera’s Carmen at Masada 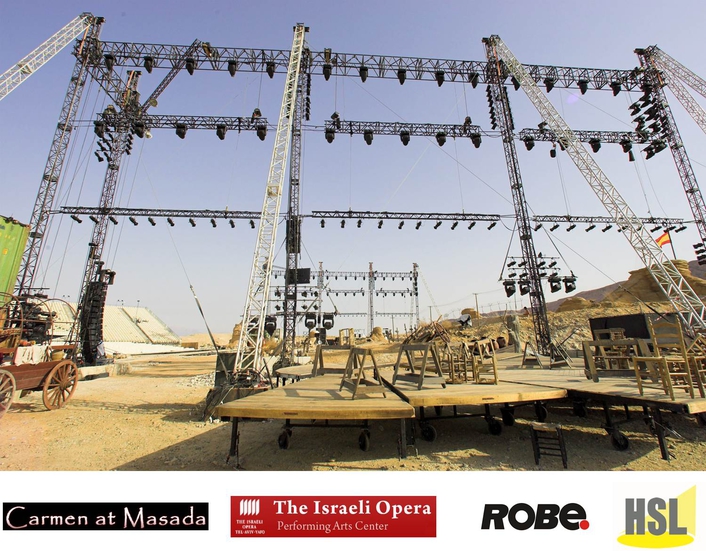 HSL was again working for the event’s overall technical production suppliers The Design group from Tel Aviv and Jerusalem, in an operation co-ordinated by event Technical Director Eyal Lavee and Technical Production Manager Elad Mainz from Stage Design, and Project Managed for HSL by Mike Oates. 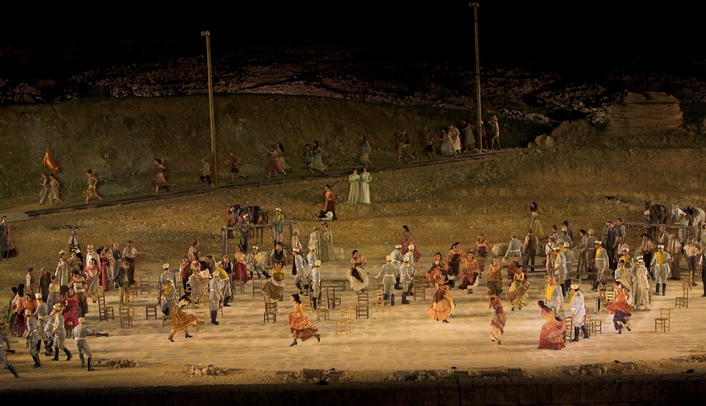 Lighting for the stunning looking ‘bare-stage’ production was designed by Avi Yona Bueno (Bambi), Israel’s best known performing arts lighting designer. The set was created by William Orlandi and the show directed by Giancarlo del Monaco both from Italy. 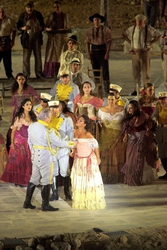 HSL’s crew of Ian Stevens and Matt Brown worked on site with Israeli lighting technicians Tsafrir Dagan (Saffi) and Itay and Ran Hafner, and together they dealt with the four containers of kit that left HSL’s HQ in Blackburn – three by sea and one by road.

The 2500s were fitted with custom reflectors to boost the light output by about 30% to help cover the long throw distances – the stage was 55 metres wide and it was 80 metres from FOH to stage. Some also featured special framing shutter modules.

These were joined by around 200 ETC Source Four Profiles – with a mix of 5, 10 and 19 degree lenses, which were all rigged off two large side-stage steel gantries and a front of house box truss built at the back of the main seating tribune.

Six Strand Bambino 5Ks were positioned on the side of the stage for low cross stage lighting, fitted with custom adaptors to take Chroma-Q M5 Mark II scrollers, and there were also 12 strings of 250W ACLs rigged off the gantries.

1.7 Km away from the back of the stage at the foot of Masada Mountain itself, 20 sets of 600W ACLs were spread out along a dirt track stretching a distance of about 1 kilometre, shooting right up the mountain and helping to create a truly magical backdrop for the drama unfolding onstage.

Buried under the ground around the stage perimeter, piercing up through grills were 56 x 500W Raylites.

Forty-eight short nosed PAR cans were used for audience illumination, positioned right in front of the orchestra pit, focused to create a highly effective blackout for the scene changes in between acts.

HSL also supplied six Robert Juliat 2.5K Cyrano follow Spots – four mounted on the FOH truss and two at the back of the seating, either end of the control area.

A City Theatrical Wireless DMX system was part of HSL’s control package, used to run data to all the Mountain lights – which included 60 x 5K Xenons from Stage Design (part of the Design Group) as well as HSL’s 600W ACLs. Two active wireless universes were beamed from backstage to transmitters with high gain antennas positioned on the mountain, with a secondary linked across a gorge, and one complete spare universe. Three generator fed dimmer racks powered up all the fixtures in this location. 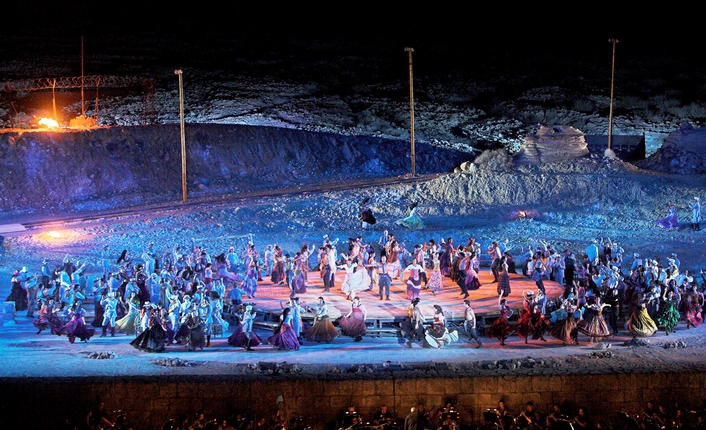 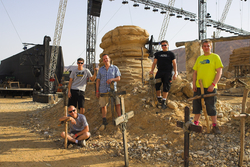 Working in the desert with the heat, dust and hostile terrain is always a huge challenge, and this year’s organic looking set entailed plenty of cable runs and other infrastructure having to be buried into the ground, which took a lot of extra time and effort.

Dealing with the environmental and climatic conditions, while still tough going, “Has become a lot easier with the experience of the previous two seasons,” explains Stevens, adding “ We are much more used to it, and working with our Israeli crew and everyone else here on the production has again been really fantastic this year”.

Mike Oates sums up, “It was a real pleasure to be involved in another high profile  international production of this calibre, and with both The Design Group team and the Israeli Opera again who always ‘push the envelope’ in producing innovative world-class shows”.