Neeme Järvi recently became both the Music Director and the Artistic Director of the Orchestre de la Suisse Romande. Not surprisingly, he is keen to make recordings in Switzerland with the orchestra and Chandos were happy to follow him there. Chandos have been recording with Neeme Järvi since 1982, not long after he emigrated from Estonia to the USA.

Appropriately enough, the music of the 19th Century Swiss composer, Joachim Raff was chosen along with some works from the French composer, Emmanuel Chabrier. Just to keep the Swiss theme going, Chandos decided to source their recording equipment locally and the OSR suggested that Merging might be able to handle this. The timing was perfect to put the new Horus Networked Audio Converter through its paces with this high resolution recording.  It was clear that more than one Horus would be needed and the best way to run the sessions was to connect the two Horus units via RAVENNA to the Pyramix, which was being used as the mixer and the recorder.  No suitable digital console with 24-bit 96 kHz capability could be sourced locally so the decision was taken to use Pyramix MassCore and control the internal mix engine parameters by using the Smart AV Tango controller.

The recordings were made in the spectacular Victoria Hall in Geneva; a building that was constructed in the 1890s at the private expense of the then British Consul, Daniel Barton, in honour of his Queen and eventually donated to the city in 1904. 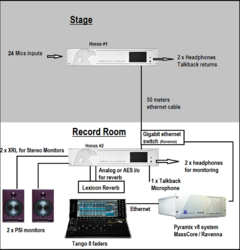 Despite having fantastic acoustics, as often is the case, some additional reverberation was required for the recording and this was created with a Lexicon digital reverberation unit inserted via the AES/EBU I/O on the Horus. Once again, this demonstrated the versatile connectivity of Horus. The immense experience of engineer and Chandos Managing Director, Ralph Couzens and producer, Brian Pidgeon made sure that everything was faithfully captured on the 24 microphones. With Horus and Pyramix recording the result, it is no surprise that Ralph Couzens had this to say; “We have used Pyramix on several occasions with great success and I had not originally realised that we were the first to use Horus in this way.  The recordings sound absolutely brilliant and we much appreciated the assistance offered by Claude Cellier and Ricardo Ryan from Merging.  We finished ahead of schedule and Horus performed faultlessly.”

A number of other prestigious recordings have been made with Horus but this was the first to exploit the full benefits of RAVENNA. The superlatives for sound quality have been universal and now it is clear to see the added value of using a networked system. “It was a real treat for us to assist Chandos with such a great recording in one of our local venues.  We had no doubt that everything would work well, but the pressure of a full orchestral session is always the best test.”; commented Claude Cellier, President of Merging Technologies.

The recording room, with live video feed of the Orchestre de Suisse Romande

Chandos Records is one of the world’s premier classical recording companies. Since 1979 it has issued a remarkable 2600 recordings of which, over 1900 are still in the catalogue. One of the pioneers of the “series”, many of these have been conducted by Neeme Järvi. The company has earned an enviable reputation for sound quality, a tradition started by founder Brian Couzens and continued by his son, Ralph.

RAVENNA is a technology for real-time distribution of audio and other media content in IP-based network environments. Utilizing standardized network protocols and technologies, RAVENNA can operate on existing network infrastructures. RAVENNA is designed to meet the strict requirements of the pro audio market featuring low latency, full signal transparency and high reliability.While primarily targeting the professional broadcast market, RAVENNA will also be suitable for deployment in other pro audio market segments like live sound, installation and recording. Possible fields of application include (but are not limited to) in-house signal distribution in broadcasting houses, theatres, concert halls and other fixed installations, flexible setups at venues and live events, OB van support, inter-facility links across WAN connections and in production & recording applications.