grandMA2 hits the spot for "Aida"

For the Aida production, the grandMA2 light was controlling Vari*Lite VL1000 TS and Martin MAC 600 wash moving lights
Lighting designer Rob Mills used a grandMA2 light as his control platform for a recent production of Verdi's "Aida" at the Epsom Playhouse in Surrey, UK. The week long production by Riverside Opera was directed by James Hurley who is a regular client of Mills, a busy theatre and opera LD, who also lights corporate and live events.

It was the first time that the opportunity had arisen for him to specify and use a grandMA2 on one of his shows, a chance he had been eagerly waiting for since working on the Floating Finale section of the Lord Mayor of London's show, on the River Thames last year. It was here he saw a grandMA ‘series 1’ properly in action being programmed by David Miller.Mills was so impressed by the speed and performance of the console on this event - up until now most of his shows have utilised other types of desk - that he approached MA Lighting UK and arranged a demo, followed by some basic training with Philip Norfolk and the MA UK team.

After just two days in the demo room, he felt confident enough to spec it for the "Aida" production. "Once I'd mastered the fundamentals, I found it incredibly fast to move on to more advanced programming," he states enthusiastically. "Whilst it needs a bit of time at the beginning to set up and learn the programming architecture and philosophy," he explains, "Once that is done, it's incredibly straightforward and easy". He simply could not believe the speed - "I can programme complex scenes and effects in less than half the time and button presses than the other consoles I have been using".

Technical rehearsal schedules for opera tend to be a lot more intense and non-stop for lighting than standard theatre style shows, so in this respect, programming an opera can resemble the pressure of a rock 'n' roll production, with elements changing frequently during the stage and orchestra rehearsals.

He also utilised a tablet PC and a laptop, one running grandMA2 onPC in full tracking backup and the other the visualiser grandMA 3D, all networked with the main console. 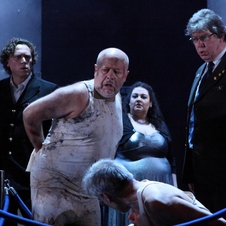 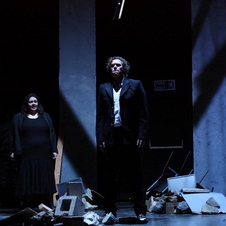 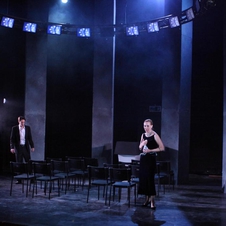 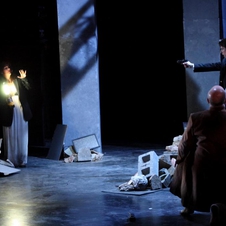 "The networking capabilities are absolutely seamless," he says, also describing the product as similar to sophisticated data-basing software in terms of depth, intelligibility and logic - "You can choose exactly how you want to run and view your data - and it all very quickly makes complete sense!" The ability to be able to edit the show-file from multiple user accounts means that different people on the team can work on different sections of the desk simultaneously if required.

He thinks the power of the grandMA 3D visualiser - which allows the design and visualisation of complete 3D stage layouts - and the fact that it is linked to the desk "is awesome" along with being able to take the visualiser into the venue and still access its full functionality. Working in this way, you can programme and tweak on the visualiser whilst running 'blind' on the console whilst another cue is live on the stage.

For the Aida production, the grandMA2 light was controlling Vari*Lite VL1000 TS and Martin Professional MAC 600 wash moving lights plus about 120 conventionals, a mix of profiles, fresnels and PARs.

After the success of his first full production using grandMA2, Mills will be specifying the console onto all his shows wherever possible.

Art and History: “Concert of Light” and grandMA enchant Jerusalem
A consummate fusion of old and new: The Fugard Theatre counts on grandMA2
grandMA2 kisses the Sleeping Beauty: Teatro Colón restorated and upgraded