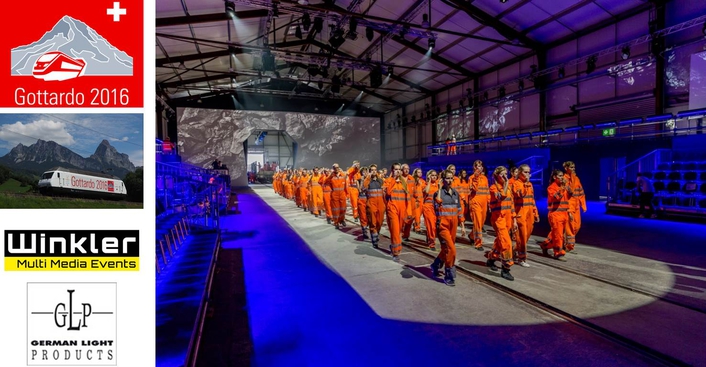 Winkler chooses 140 of the fixtures for grand opening ceremony

The company Winkler Multi Media Events in Canton Aargau is one of the leading Swiss event solution providers for multimedia and three-dimensional live communication. They were recently entrusted with providing the equipment for the opening ceremony of the Gotthard Base Tunnel.

With a construction period of almost 17 years, and extending to 57 kilometers in length, the world's longest tunnel is regarded as the “Swiss project of the century”, and has attracted many superlatives.

The construction, which is seven kilometers longer than the Eurotunnel, is the heart of the new Railway Link through the Alps and connects the cantons of Uri in the north portal Erstfeld in central Switzerland to the south portal in Bodio (Canton Ticino). As a result, the travel time from Zurich to Milan has been reduced by one hour to about 2 hours 40 minutes. For freight transport, the new Gotthard tunnel brings greater capacity, faster connections and improved reliability. The new rail tunnel is recognised as an outstanding technical and organisational feat worldwide.

At the opening ceremony of this “building of the century” more than 1,000 guests from the world of politics and local dignitaries, including distinguished guests from neighbouring countries, arrived on June 1st at the foot of the Gotthard.

Theatre director, Volker Hesse staged a spectacle with 600 performers to commemorate this ultra-modern new tunnel, featuring various musicians such as Alphornbläser, das Armeespiel and local choirs. International artists came from Chile, Spain, France and Germany and worked hand in hand with the non-professional actors from the Gotthard region. 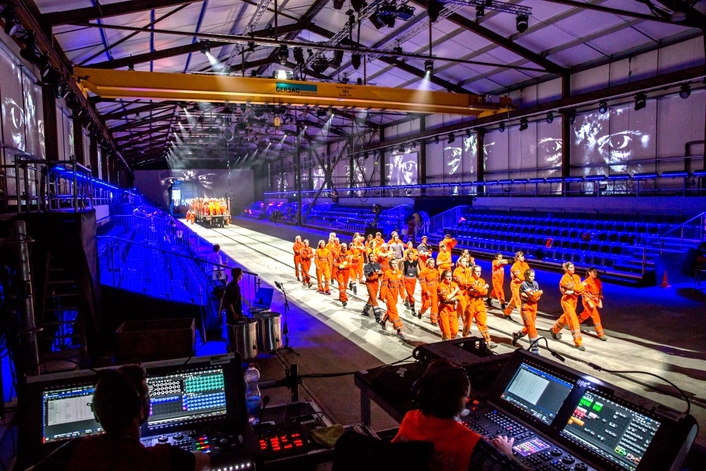 Lighting designer Rolf Derrer, for his part, set the staging with 140 GLP impression X4 Bars and was impressed by the capabilities of the flexible LED Strips from the Karlsbad manufacturer. The impression X4 Bars were placed above the bleachers and served as street lights and striplights for the catwalk. There was one situated behind the grandstand so that the celebrities on the podium could be seen in the right light by the spectators.

“Rather than use fixed LED Strip Lights with no zoom, we proposed the X4 Bars due to the extra zoom and tilt function. These functioned very well and were immediately integrated into the setup," stated Winkler technical project manager, Roni Huber. “The X4 Bars were a real added value for the staging."