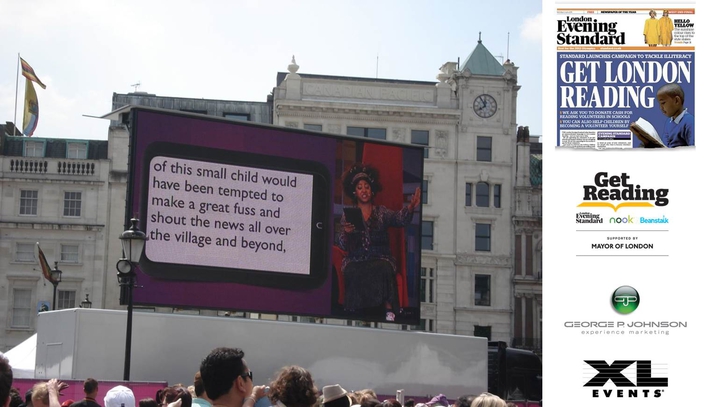 XL Events Supplies Outdoor Video Solution for London ‘Get Reading’ Festival
To promote their campaign to ‘Get London Reading’, the Evening Standard, in partnership with Nook, planned a one-day event in Trafalgar Square called ‘Get Reading’.

Experience marketing agency, George P Johnson were appointed to produce this one day festival of reading that included live celebrity readings and celebrity appearances as well as other activities designed to celebrate the joy of reading.

‘Get Reading’ took over Trafalgar Square from 11 am until 5pm on Saturday 13th July and saw many thousands of visitors throughout the day. Hosted by comperes Dick and Dom, activities featured an appearance by War Horse, performances from the casts of Billy Elliot The Musical and Wicked and live readings by celebrities including Hugh Grant, Warwick Davis and Rupert Everett. 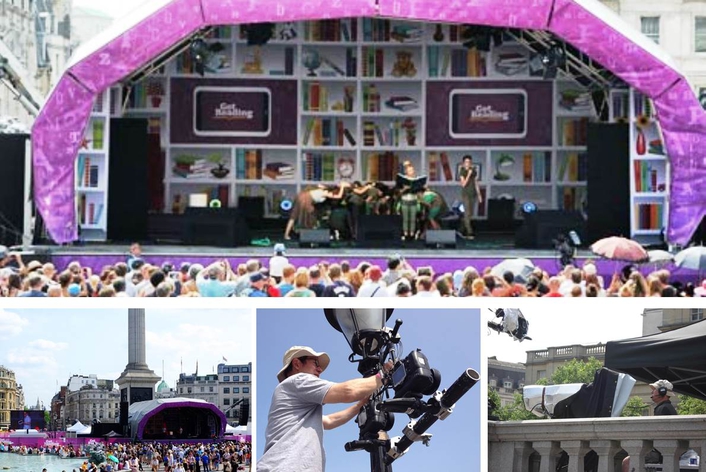 XL Events supplied two mobile LED screens – one 50 metres square and one 16 metres square – either side of the main stage. These showed live IMAG footage from the stage plus promotional films and event graphics throughout the day. Video production on the day was overseen by director, Stuart Bailey.

Four of XL’s Sony HXC-100 HD cameras managed by Phil Compton captured all the action. Two were located in the pit in front of the stage and two at the rear of Trafalgar Square for long shots.

XL supplied radio and hardwired communications systems for the crew, to ensure the smooth running of the event from front of house to backstage. All comms were managed by Matt Jackson.

At the request of George P Johnson, XL Events also ran a time-lapse video of the event from set-up to departure, which shows the crowds and performers throughout the day.

“We were delighted to work on this event with Chris Heyland and the George P Johnson team,” commented Jacqueline Rice. “The scorching hot weather brought its own challenges to the day, but our equipment functioned very well and all the crew worked tirelessly to pull off a highly successful show.”