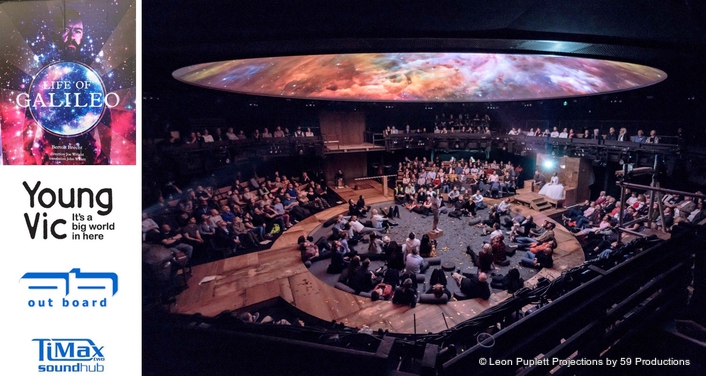 Life of Galileo at the Young Vic.

In keeping with Galileo’s lifetime preoccupation with circles, ellipses and their spatial movement, the Young Vic’s recent interpretation of Bertolt Brecht’s Life of Galileo was also staged in-the-round. Central to the sound design by Tom Gibbons and associate sound designer Dan Balfour was a TiMax SoundHub processor, which provided a uniquely powerful platform for rendering immersive three-dimensional spatialisation of multi-layered sound effects and high-energy music beds, the latter specially-commissioned from one half of The Chemical Brothers, Tom Rowlands.

Balfour states, “TiMax is easy to get to grips with.” To illustrate the simplicity, he continues, “In tech we were able to add movement complementary to the action, responding to the important theme of circular movement. It liberated the sound design from simply playback and speakers.”

The action takes place as if within a planetarium. To support the powerful soundtrack, additional loudspeakers around the stage area bolster the Young Vic’s in-house sound system.

Above the central area, where actors play their parts amongst lounging members of the audience, a dome projected with lighting and video-mapping effects depicts areas of the solar system. A circular staged area surrounds the centre and further scaffolded staged areas, opposed across the central space, are brought into the action sporadically. 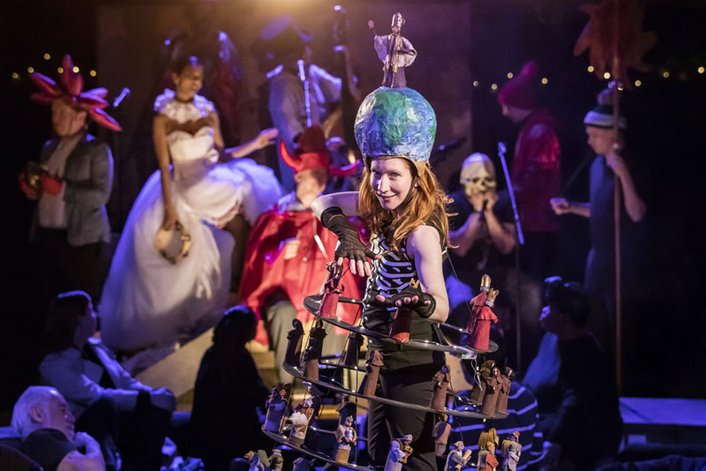 Life of Galileo at the Young Vic.

As the action moves and circulates, the dynamic soundscapes created using TiMax spatial Image Definition objects use the full auditorium space. Balfour explains, “There’s an awesome close-up of the Sun projected onto the dome at one point, and as it moves and fills the space we mapped the sound with it, starting from one balcony speaker and out to the whole immersive system. It’s a subtle effect, but gives another dimension to the experience.”

“Similarly, for the Jupiter and Moon sequences we began in the centre of the dome on the four Y7Ps, and as the planets get closer we added the 12 Y7Ps around the edge – until the image fills the entire screen and we’ve added in the balconies and the 22 E0 surrounds. It gave a real sense of depth.”

With so many possibilities at their disposal, Gibbons and Balfour decided to keep the techno music bed static, assigning the mix to alternate nearfield left and right front and rear pairs around the auditorium to create a spatial stereo effect wherever you sat.  In Balfour’s words, “We had all the stems and we could have done all sorts, but when you apply too many spatial treatments you can sometimes lose the core of the mix. It has to be handled very carefully, and in this case keeping the music static made shifting the sound effects on top of it all the more effective. That was something we discovered during tech, especially with the finale.”

Young Vic
Out Board