G-Spot Enchanted by The Magic Flute 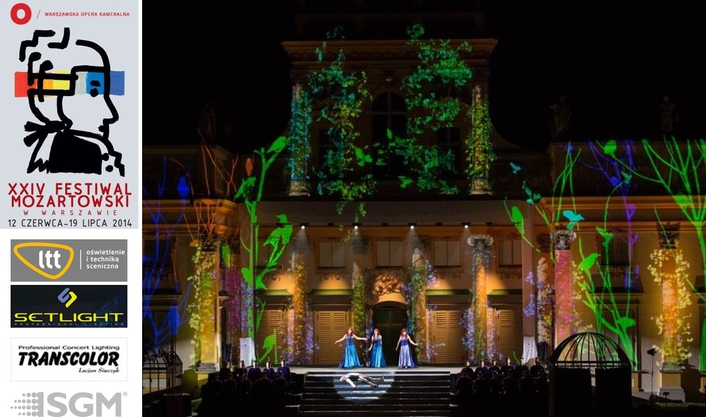 .
As part of the Warsaw Mozart Festival, which has been running for more than 20 years, lighting designer Adam Tyszka this year took on responsibility for an open air performance of the W. A. Mozart opera “The Magic Flute”. This opera took place in the courtyard of the 17th century Museum of King Jan III Palace at Wilanow, thus using the prestigious façade as a beautiful backdrop for lighting and video creativity.

The concept and location of this event, being open air and using the façade as a backdrop for multimedia content, limited the use of truss. Any type of roof above the stage would cause the truss/construction pieces to obstruct the view of video projections onto the façade. Therefore, the lighting designer relied on the technical crew’s ability to protect the equipment located close to the stage. 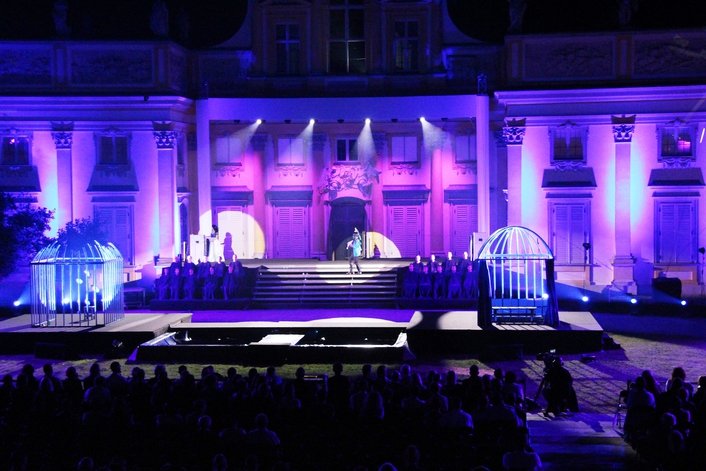 Further to that, several dozen P-5 wash lights, which were provided by Transcolor, were put to use - most of them used for façade illumination.

The G-Spots were placed close to the stage, directly onto the grass, where there was no truss or protection. “Traditional IP20 moving heads would be exposed to dust, moisture from the ground, as well as all kinds of ants, worms and bugs, which can really cause a considerable mess. Finally, the weather forecast also gave cause for safety concerns. But we were confident that G-Spots would withstand all of it,” states LTT’s Pawel Jarzabek.

Concerns about the weather were justified, as Warsaw was struck by a thunderstorm and heavy rain on the day of the premiere, just ten minutes before scheduled opening. The show was delayed for about 45 minutes, until the storm subsided sufficiently to allow the performers’ safety on stage. “But the G-Spots worked throughout without any problems. They were completely indifferent to the rain,” comments Jarzabek.

The amazing lighting show was programmed on a grandMA2 full-size console operated by Kajetan Gostomski.

After a successful event, the only thing left to do for LTT back in office was to clean the lenses from dirt and air pollution residues and the fixtures were ready for yet another job.