Freemium Games Are Popular and Profitable for the House

I’ve always liked the video game industry just not playing them because … oh look, there goes a bunny rabbit.

Lump them together and sales (hardware/software/service) should produce about $90B in sales this year and climb to $120B by 2018, according to Juniper Research.

That’s more than the M&E (media and entertainment) industry!

Most of the console and computer revenue comes from actual purchases or monthly subscriptions to multi-player games.

Since the smartphone began to seemingly dominate our every waking moment, you’d think that there would be a shift from sitting in front of the screen to the small screen where there is a dizzying array of paid, free, freemium options.

Some like to say it’s a way to keep their mind sharp.

Others claim it’s a way to improve your eye/hand/mind coordination.

Both have some degree of validity.

Except for the addictive personalities that are fed by the potential of the big win just behind the next click, it doesn’t really matter.

Well, as David Hannum said, “There’s a sucker born every minute.” We know you’re going to say P.T. Barnum said it but check Wikipedia … yep, a sucker was the first to say it!

While some groups like to say game violence is bad for young folks, it seems to be more of a problem with people who don’t play much or who are closet players.

Most of the games (91 percent, according to the ESA - Entertainment Software Association) are designed for teens and kids, but they appeal to all ages. 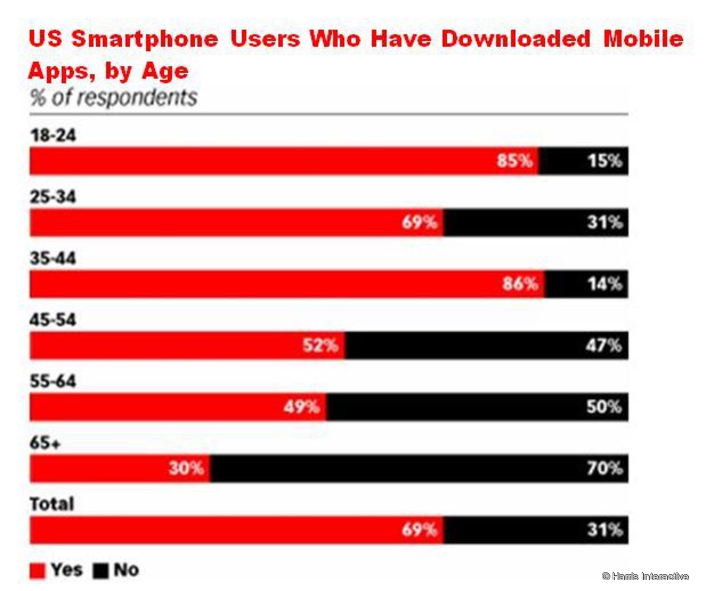 Loaded Smartphone – Check your smartphone and you’ll see a wide range of good, nice and important apps for school, business and relaxation.  Game app developers like to point out that most of the games are developed for the younger set (except for the gambling stuff) but the real downloaders and players are a little older and are the more serious players.

While game developers are increasingly focusing on cross-platform games that will let you play on your console at home, computer in the office and phone while you’re everywhere else; the fastest growing segment is the “free” games for your smartphone.

If he were still around today, economist Milt Friedman would say the games were proof that, “There’s no such thing as a free lunch.”

And if you think Big Data scraping and programmatic ads are a problem, they take a back seat to growth of free smartphone game downloading, play and pay. 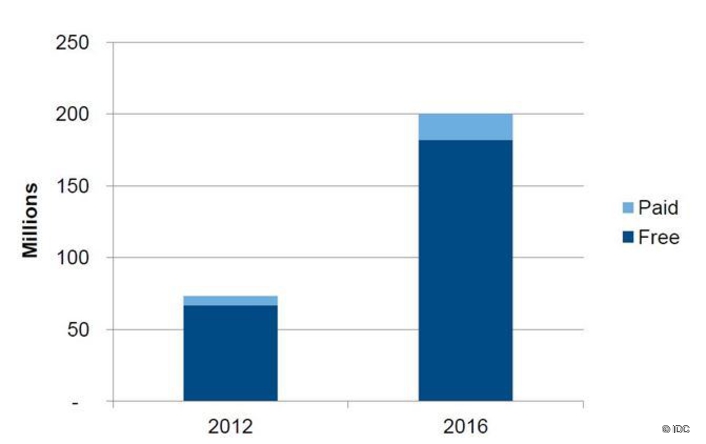 Free at First – Flip through the iTunes and Google Play libraries and the majority of the apps and games are offered for free.  Even if a spectacular game is only 99 cents, the free version will be downloaded much more frequently, even if it’s only free to start.

In the U.S., mobile game revenues – download and in-app purchases will rack up more than $4B this year and roughly $10B globally, according to eMarketer.

Google loves to talk about how many more Android-based phones are in use, even though Apple makes more profit with the iPhone.

So do the games on their platform.

According to NPD’s Checkout Tracking, the average iPhone user/player of Game of War spent $398, while Android cheapskates only spent $165.

There are nice (I guess) innocent games like Candy Crush but everyone seems to like the adrenalin rush of gambling.

In fact, game developers borrowed from the casino industry to categorize players so they better cater to them – whales, dolphins, minnows. 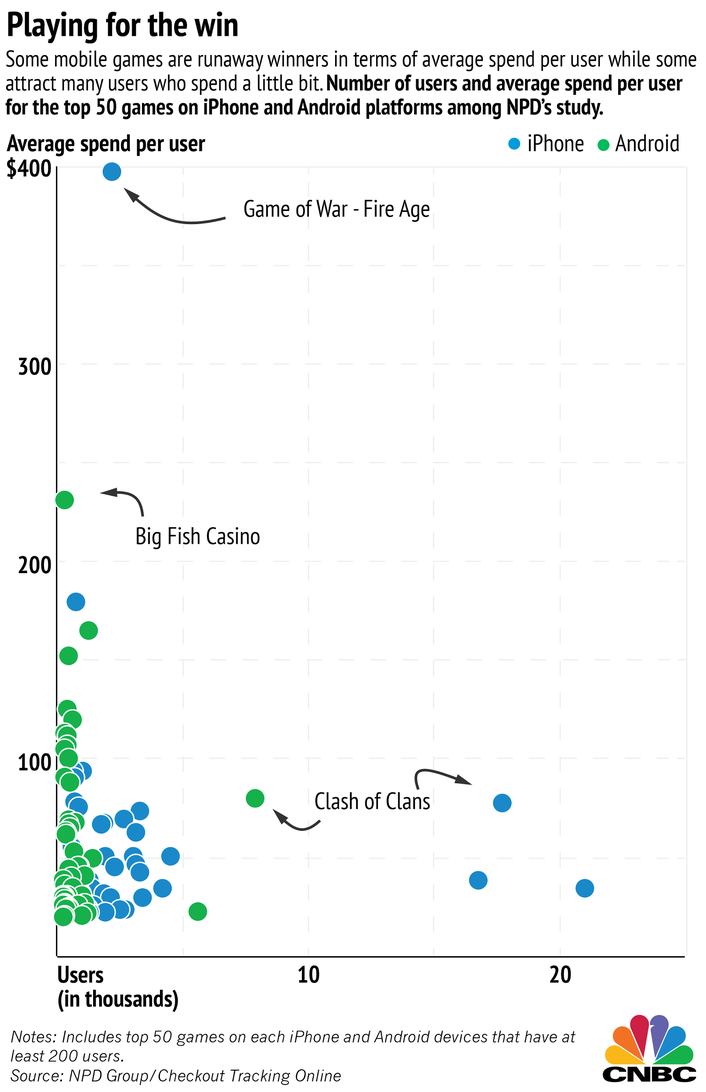 Unlike the casinos of Vegas and Macau, the gambling mobile games have better odds – for the developer.

You win digital credits and pay with real money.

And if you’re worried about all those government agencies following your every text, Tweet and sordid site visits, know they’re pikers compared to the game developers.

Every time you log on to play, they start collecting data--a couple of hundred GB a day per player.

Sure, there’s the basic demographic data – male or female, age group – but heck, the NSA (National Security Agency) can get that just by asking Google, Facebook, Yahoo and your service provider.

But game developers are so much better, more thorough.

They know where you live, your income, your relationships, favorite teams, political/religious/sexual preferences, when you go to work, where you work, how you like to spend your weekends, oh hell, everything.

You give it to them … willingly.

They use it wisely to help you improve your value to them as a whale.

And to boost their chart position and retain more users. 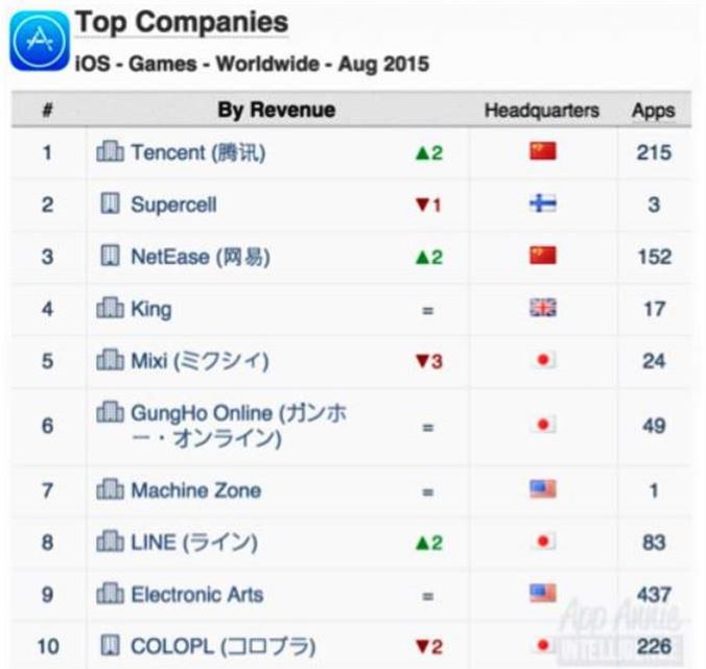 Big Scores – Once they’ve released their game to online wild, game developers study their players’ activities in detail to determine what they need to do to fine-tune the game to keep them playing and buying more game play tools.  Games on the top 10 list obviously do the best job of meeting the players’ wants and needs.

The more players they retain, the more they get to play longer/spend more, and the more valuable their games are to ad networks.

Sounds like a helluva’ business to be in, doesn’t it?

Well the people who do it are bigger gamblers (O.K., entrepreneurs) than some of their whales.

At WWDC (WorldWide Developer Conference), Apple noted that they have about 1.5M apps in their app store with 50+B downloads and $5+B paid to developers.

At Google I/O, they said they had 150,000 developers who delivered up more than 800,000 apps. Analysts estimate they also had about 48B downloads that earned developers maybe $1B.

Granted, they weren’t all games. Some companies put up apps to sell pizza, burgers, clothes, do business stuff but still …

Okay, so you don’t have grand visions of having your game in App Annie’s Top 10 and you just want to make a comfortable living.

First, you have to develop an insanely great game and jump over all the security hurdles that Apple and Google put up to ensure you do no harm to them or their users.

Then you have to market the hell out of it because “if you build it they will come” doesn’t work in the crowded marketplace where yours is one of tens of thousands of insanely great games.

Market Research firm SuperData noted it costs about four bucks, even when you put a free sign on it to get a user; and you have to keep that sucker (ooppss gamer) at least two months before you get out of the red.

Most of the games are put on the smartphone, never played and then discarded for something newer, better, more exciting after 30 days.

Of course, you could scrape together a few bucks and get someone as endowed as well-known as Kate Upton to do an ad for you that you can  put on YouTube, Facebook or even the Super Bowl. 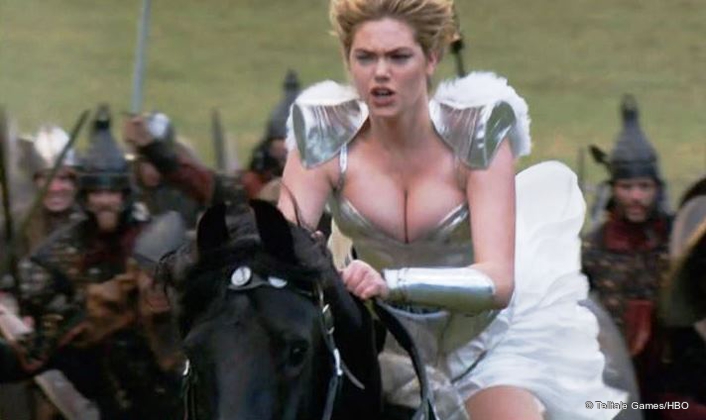 Attracting, Attacking Gamers – Game of Thorns is a pretty exciting game to play (we’re told); but it’s not just a cross-platform video game, it’s also an HBO TV series.  The episodic adventure developer took no chances on getting to the top dramatically by placing Kate Upton in the expensive Super Bowl ads to promote the free download roll-out.

It might inspire a few teens but I doubt if they’re ever going to be one of the whales you need.

Of course you still have to spend countless hours enhancing, enriching the game because even millennials and boomers quickly tire of the samo stuff.

Or, you can simply keep enjoying your smartphone games at home, on the road, in the office, in the classroom. 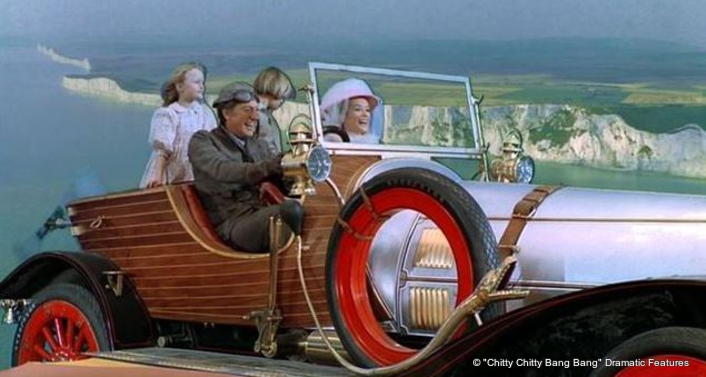 Seems like smartphone gaming is another case of playing against the house odds.