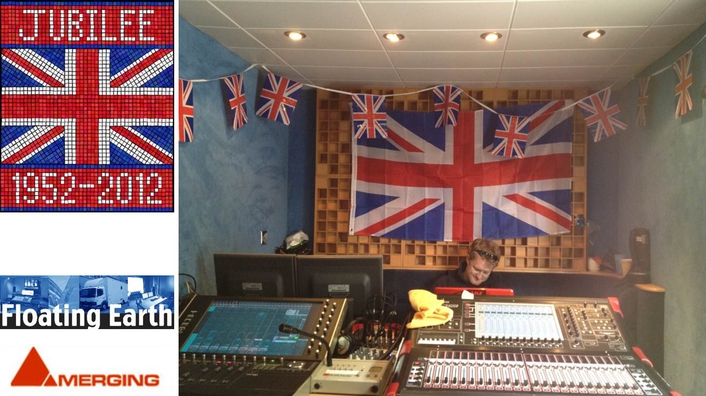 Where reliability counts, there can be no compromise: Stage engineer Dave Rowell is setting up the Pyramix
Live concerts with a quick change over of acts are the sound engineer’snightmare. Dealing with hundreds of channels is enough of a challenge withoutworrying if essential parts of your recording chain might fail. Floating Earth provided the sound facilitiesfor the Jubilee Concert and Pyramix was the natural choice to deal with keyparts of the signal chain.

The number of channelsreflects not only the band that is playing but also the next acts to come on,so you need to know they are all live. The Pyramix internal mixer has the capability to do that and whencombined with a Smart AV Tango 2 controller, it is the ideal way to check yourlines before going live. With 416channels to deal with, 96 of which were coming from a second vehicle, this was criticalto the success of the final transmission.

Althoughthere are no immediate plans for a public release of the concert, Pyramix wasused to record everything. It also proved indispensible on the day before whereheavy rain prevented the orchestra from attending the rehearsal. Pyramix was used to play back their tracks sothe performers could get the true feel of the song and the correct soundbalances could be stored.

FloatingEarth are no strangers to high pressure having previously been involved withthe transmission of last year’s Royal Wedding, numerous Brit Awards and acomplete Who’s Who of live performances where failure is not an option. When asked about the choice of Pyramix,Floating Earth’s co-owner and chief engineer, Mike Hatch had this to say; “Our business depends on being able tohandle anything without risk of failure. We have been using Pyramix for many years because, where high trackcounts are concerned, it is simply the most stable DAW platform available.”

Floating Earth was established in 1987 as an independent recording, production and post production company based in West London. Having begun as a specialist Classical Music recording company, it now offers a broad range of services across all genres of music. Shortly after formation the company started to gain a reputation for the quality of its work that was recognised by a clutch of awards including Gramophone Awards, Academy Awards, BAFTAs and Grammy Awards. The Floating Earth truck is a 7.5 tonne mobile unit that can be fed up to 128 microphone channels through a single optic fibre and the company offers three “carry-in” rigs and comprehensive post production facilities.

Merging Technologies SA is a Swiss manufacturer with over 20 years of experience in developing groundbreaking, professional Audio and Video products for a wide range of entertainment and media industries. With a dedicated user base in the elite end of the music, film, television, mastering and performances industries, Merging Technologies is committed to developing product ranges with unrivalled quality and flexibility, no matter what the application. Merging builds tools for people who want more from their systems, have an inherent need to push boundaries, and believe that quality always comes first, every time.